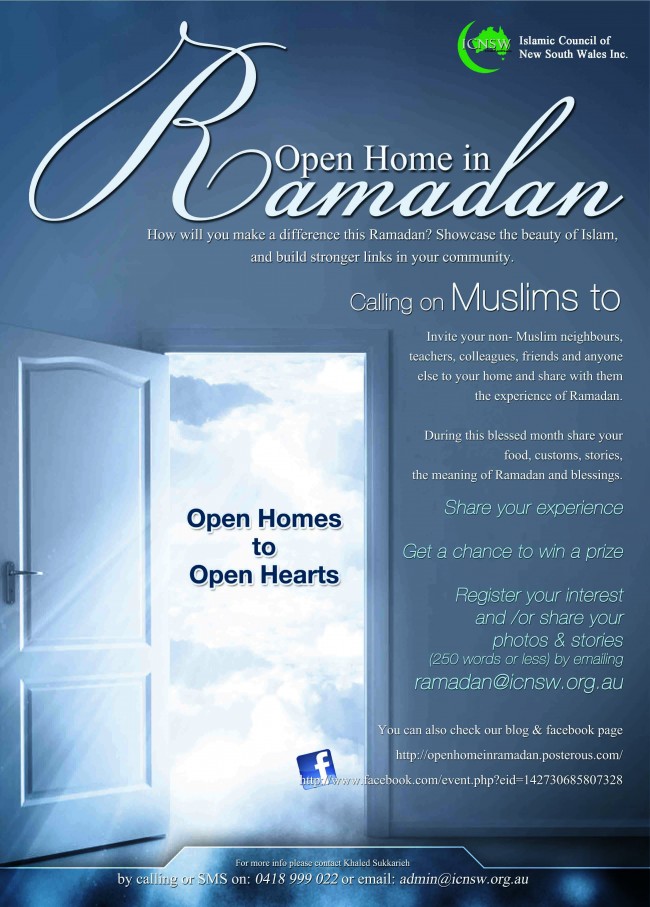 Australia’s Muslim community is being encouraged to share the Ramadan spirit with their non Muslim friends and neighbours by taking part in an initiative aimed at breaking down barriers and fostering a sense of unity amongst Muslims and non-Muslims in Australia.

The Islamic Council of New South Wales (ICNSW) is inviting all Muslims to open their homes to non-Muslim colleagues, neighbours and friends during the Islamic calendar month of Ramadan in August.

Open Home in Ramadan is an exciting opportunity for non-Muslims to experience the Iftar, or the breaking of the fast with a meal after sunset with Muslims and truly share in the experience of Ramadan.

Khaled Sukkarieh, chairman of the ICNSW, described the initiative as a means to “open doors, hearts and minds of both Muslims and non-Muslims in a relaxed environment that will lead to long lasting friendships.”

“We are encouraging Muslims to open their hearts and doors and invite non-Muslims for an Iftar dinner in their homes.”

The month of Ramadan is the 9th Month in the Islamic lunar calendar. Fasting involves abstaining from food and drinks from dawn to sunset and is obligatory for every able-bodied Muslim.

Fasting encourages Muslims to both increase their spiritual connection with God and empathise with those less fortunate.

The Hon. Minister for Citizenship and Communities and Minister for Aboriginal Affairs in NSW Victor Dominello said, “The Islamic Council is to be congratulated for its efforts to promote tolerance and cultural diversity – things that are so special about our society. Sharing an Iftar dinner brings people of different backgrounds together and strengthens all that unites us here in Australia.”

The Islamic Council invites Muslims who will be hosting a non-Muslim during this time to register via email to the Open Home in Ramadan 2011 coordinator Zeynab Gamieldien at ramadan@icnsw.org.au.

Non-Muslims who would like to be hosted by a Muslim family as part of this initiative should email the coordinator. 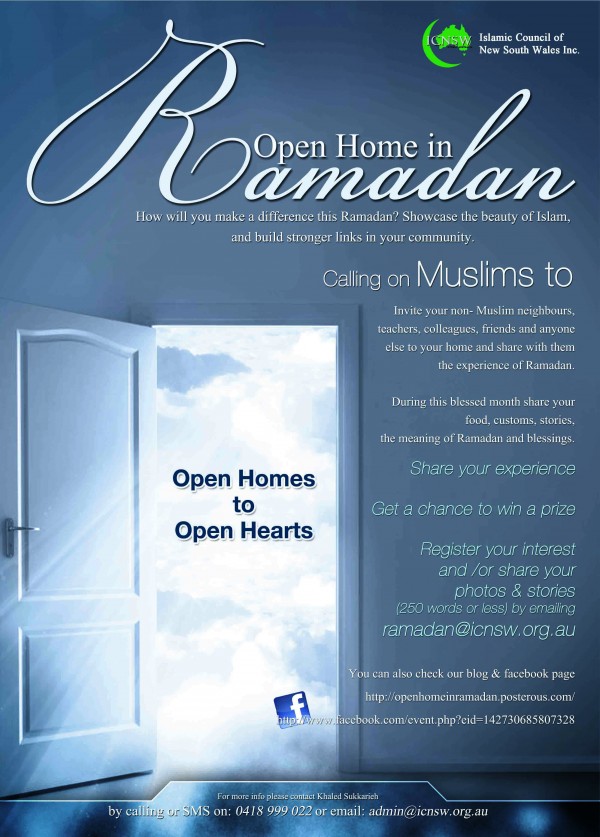