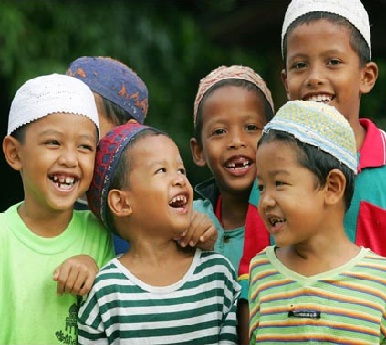 Kulsum Tasnif’s kids might be too young to fast during Ramadan, but that doesn’t mean they’re off the hook for the month.

The Mason, Ohio, resident has resolved to use the occasion — and its focus on helping those in need — as a way to encourage her three children, ages four to eight, to become more civic-minded.

She and her friends have been taking their kids on a series of trips in that vein — first to a food pantry to learn about hunger and to drop off donations, and then to an animal shelter to promote respect for all creatures. Coming up are visits to a local Ronald McDonald House and a children’s hospital.

“Ramadan serves as a catalyst to get things started,” Tasnif said. “Even if they don’t fast, they can at least feel like they are contributing to the betterment of their community in some way.”

Many parents around the country are getting their children involved in Ramadan traditions well before the wee ones are old enough for the month’s main event: going without food and drink from dawn until sunset every day.

Muslims use the fast as a vehicle for introspection and heightened spirituality, a message that can be a bit beyond children. So it’s the other aspects of Ramadan that get emphasized — fostering a stronger sense of family and community, improving one’s character and amping up good works in the hopes of making them lifelong habits.

Priscilla Martinez reminds her kids that they need to be extra nice and patient with one another and do more kind deeds. When the time comes to break the fast in the evening, her six children, ages three to 12, take turns being the one who serves the water and the one who passes around the dates — traditional fast-breaking grub — and, perhaps most excitingly of all, the one who gets to turn on the string lights decorating their Washington, D.C.-area home.

“Everyone has a contribution to make. It’s part of being a family,” Martinez said. “When you instil the traditions and attachments from an early age, they gain ownership of that. They feel a part of it.”

In Laramie, Wyo., Ginger Davis uses crafts as a way to bring the holiday to her young family. She wasn’t raised Muslim and so she’s improvised traditions that fit her brood.

Last year, she and her four children, ages four to 10, made papier-mache cookie boxes decorated with a crescent and star to give to neighbours, along with an explanation of Ramadan and its custom of sharing food with friends. They’ve also made prayer beads out of wooden beads and yarn.

The first Ramadan craft she did was a roughly one-by-one-metre felt calendar, where a treat hides behind each of the days — pencils emblazoned with “Happy Ramadan,” gift cards for the local bookstore, bouncy balls decorated with a crescent and star and, of course, pieces of candy.

Davis said she wanted to bring her children some enjoyment at fast-breaking time and make it something the whole family can participate in.

“Mentally, I think they’re not ready to understand the religion part of the holiday,” Davis said, mentioning the special nighttime prayers that take place in Ramadan and other mosque events. “Kids need something more on their level.

“I hope I’m bringing something to my kids that they remember fondly the same way I remember growing up and not being able to sleep on Christmas Eve because of all the things that were going on around me.”