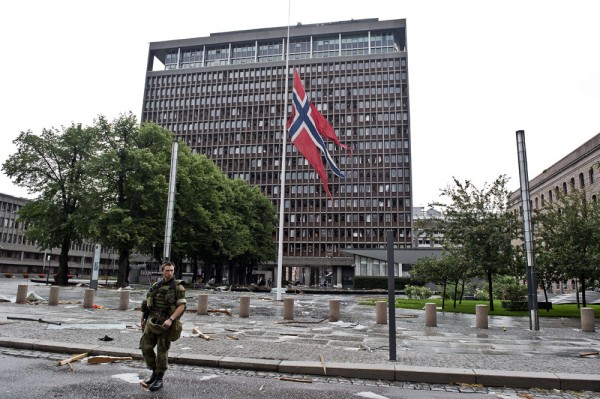 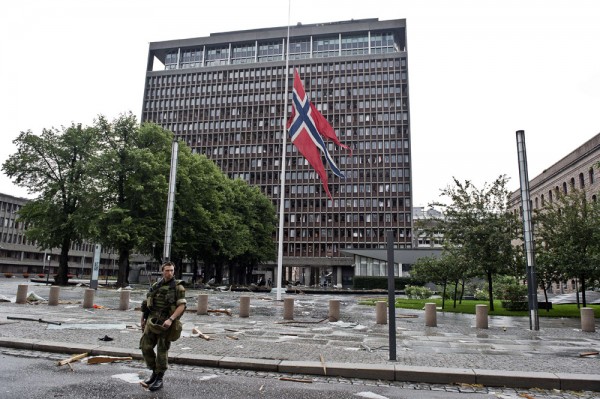 With at least 92 people dead and several injured, the brutality of Friday’s attacks in Norway left the country reeling.

But who to blame for the bomb blast that tore through Oslo’s government district and the shooting spree that left scores of teenagers dead at a youth summer camp in nearby Utoya?

Moments after the explosion that, as of Saturday night, left seven dead, pundits and analysts alike had assigned blame to al-Qaeda or an al-Qaeda-like group (a close approximation will do, one can suppose).

There were also reports of a group calling the Helpers of the Global Jihad either claiming responsibility for the attack or lending it support to whoever carried it out. The group retracted its rather vague statement on Saturday.

Norwegian police, meanwhile, concluded fairly early on that the attacks weren’t the work of a foreign terrorist group. They have 32-year-old Anders Behring Breivik in custody – he is believed to be the gunman who opened fire on the teenagers attending a youth camp organised by the Labour Party.

It’s also been reported that Breivik bought six tonnes of fertiliser in May from a farm supply firm, which seems to take a page right out of another non-Muslim terrorist’s handbook: Timothy McVeigh, who along with Terry Nichols, blew up the Alfred P Murrah Building in Oklahoma City in 1995 with a truckload of fertiliser, killing 168 and injuring 450.

Still, despite the initial lack of evidence shortly after the attack – and a growing stack of evidence pointing to the contrary later – some continued to look for a “jihadist” connection in the Norway attacks. Some looked for a link between the attacks and the anger that erupted after a Danish newspaper published cartoons of the Prophet Muhammad in 2005.

This hits the Muslim community in Norway in two different ways – first, their sense of security is threatened as much as any other Norwegian. On top of that, they are automatically blamed for arguably the darkest days in Norway’s recent history.

The local Muslim community was quick to respond.

The Islamic Council of Norway immediately issued a statement of condemnation, saying that any attack on Norway was an attack on the homeland of its members, while imams and other Muslim community members visited with various Christian groups and church leaders in an effort to not only offer condolences, but to improve lines of communication.

“We are in deep sorrow with the Norwegian community,” Muhammed Tayyib, the coordinator of The Islamic Cultural Centre Norway, told Al Jazeera.

Tayyib said that even though most of the Muslim community are immigrants, that they are “part of the democratic system and support the freedom of expression. We are reacting [to the attacks] as Norwegians, not as outsiders”.

Tayyib said that the mosque at the cultural centre, which is in the heart of Oslo and not far from the bomb blast, remained open to all on Saturday.

He said many non-Muslims had come in on Saturday to talk about the attacks or just to get to know the Muslim community better.

Rizwan Ahmad, the general secretary at the cultural centre, said that reports of backlash against Muslims in Oslo left the younger members of the cultural centre feeling vulnerable. Two women wearing hijabs, he said, were harassed on the street while a Pakistani man was beaten on a bus.

But Ahmad said that the Muslim community remains in solidarity with the greater Norwegian community.

“We don’t say anything about (the attacker) being Muslim or not Muslim. It’s still a tragedy,” he said of the attacks.

Dleen Dhoski, coordinator of the Muslim Student Association at the University of Oslo in Blindern, said that the concern wasn’t about who was to blame.

“Our main concern wasn’t [whether] it was a specific group that performed this horrible action, but we were shocked and concerned about the wellbeing of those who got affected by the attack,” said Dhoski, who said she felt that Norwegian media was fairly neutral in its reporting.

“And [we were] even more shocked that something like this could be happening in our safe homeland … This was an attack on peace and democracy in Norway, so I don’t believe it has an effect only on the Muslim communities, but the entire nation,” said Dhoski.

She said the Muslim community was focused on helping those most affected: “So the main priority right now for us all is showing our support towards the victims, and just try to contribute as much we can to make sure that Norway stays as it always has been.”

The group continues its public outreach, she said, attending debates and dialogues with non-Muslim groups while keeping an open line with the media.

Of course, it wasn’t just the pundits and security analysts who were looking no further than the Muslim world to blame for the attacks.

The far-right – which has shown itself to be focused on with blaming Muslims for all European ills – was doing the same. Notably, the Nordisk group (a nationalistic, anti-immigration activist group described as having “Nazi-like beliefs) was busy blaming Muslims for the attacks on its forum.

Posters complained that the “uncontrolled immigration from Muslim countries” was to blame and that the attacks were “expected” and that, “terror will not decrease when the desert rats surge across Europe”.

The group did not respond to an interview request on Saturday.

While Nordisk is certainly a somewhat fringe element, Norway, like many other European countires, where anti-immigrant groups have gained significant ground in recent elections, is swinging further to the right. Its Progress Party has been getting stronger, with some elements in the party seeking tougher immigration laws. In 2009, it called for the deportation of parents whose children wear the hijab to school.

The posters on the forum seemed unaware that Breivik is reportedly a member of their group. Norway’s police confirmed that Breivik identified himself as a “Christian fundamentalist”, while local media reported that he had posted anti-Muslim rhetoric online on several occasions.

Indeed, Breivik, it has been reported, was also rather taken with at least one member of the far right, Pamela Geller, a noted anti-Islam activist who fought against the construction of an Islamic community centre near the site of the former World Trade Center towers in New York.

Geller, who in May blogged that Muslims were responsible for “all rapes in the past five years” in Norway linked Friday’s attacks to a “jihad”.

Ali Esbati, an economist at the Manifest Center for Social Analysis, says the negative perception of Muslims in Europe has become a “convergence point” among right-wing groups, who spread the viewpoint of Muslims as an “occupying force and threat to Western society”.

“The wider problem is that it’s not even radical Islam that’s seen as a threat – it’s the idea that all of Islam or Muslims are a threat,” said Esbati.

“So these radicals find a wider acceptance in mainstream politics.”

He’s not surprised by the knee-jerk response of Muslims being blamed for the attacks, as he says, discourse is not driven by facts or statistics. Rather, it is driven by perception – and right now, terrorism’s face isn’t of the radical right or of separatist groups in Europe. This has lead to the proliferation of what Esbati calls fundamentally “racist” ideas towards Muslims.

“The tone in public discourse … has become much harsher, it’s been a gradual process,” said Esbati.

“It’s the normalisation of ideas that were far more marginalised in the past.”

Still, the question remains: When what was targeted was a government building and a youth camp put on by a political party – one that calls for the recognition of a Palestinian state – why would a Muslim be a more likely suspect than, say, a far-right terrorist?

Essentially, the answer simply seems to be this: It’s been nearly a decade since the September 11 attacks, which, it seems, have had the effect of making Muslims the terrorist fall-guy in the Western world.

“It was obvious that everyone would assume that it was a Muslim,” said Ibrahim Hooper, spokesman for the Council on American-Islamic Relations.

“All the Islamophobes on the internet jumped all over it.”

He said that, even as of Saturday night, US media reports in the US were claiming “Islam this and al-Qaeda that.”

But then, said Hooper, there’s the “madman” angle, referring to the Norwegian official who said that the attacks were “not Islamic-terror related” and therefore “a madman’s work.”

“Unless it has been committed by a Muslim, it’s not terrorism. If a non-Muslim commits an act of terrorism, they don’t call him a terrorist. They say he was ‘a madman,'” said Hooper.

Even though Breivik has been identified as a Christian, Hooper says he’s sure his actions will not be affiliated with his faith – nor should they be. It’s important, he says, to realise that an act of terrorism carried out by an individual, no matter what religion or creed, not be associated with the entire population following that faith.

This, of course, is not the case for Muslims in the current climate, and so Hooper says the focus should be on outreach. Muslims in Norway must continue to build coalitions and to work to “marginalise extremists of all faiths”,  he said.

“Everything always comes down to education.”