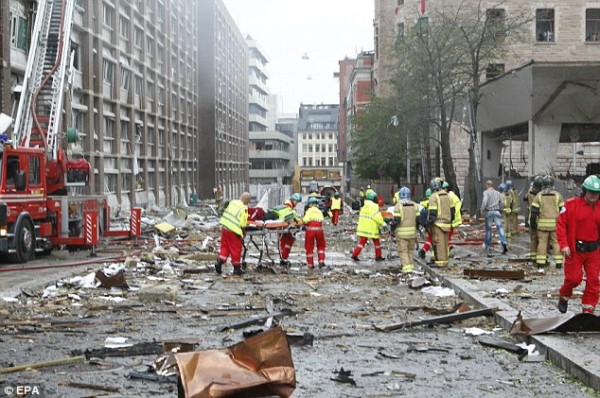 Anders Behring Breivik –  right wing anti Muslim terrorist
Police have said a Norwegian man arrested after the twin attacks in Norway is a right-winger with anti-Muslim views, but they do not know whether that was a factor in the attacks.

Police are continuing to question the 32-year-old – named by Norwegian television as Anders Behring Breivik – after he was detained on Friday evening in connection with the attacks.

They said the suspect dressed up as a police officer to gun down at least 80 people on the island of Utoya where a political youth meeting was taking place.

It followed a deadly bomb attack outside government buildings in the centre of Oslo that officers say was set off by the same suspect.

National police chief Sveinung Sponheim said internet postings by the suspected gunman “suggest that he has some political traits directed toward the right, and anti-Muslim views, but if that was a motivation for the actual act remains to be seen”.

Local media reported that Breivik set up an agricultural business to enable him to buy large quantities of fertiliser to make a bomb over two-year period.

Officers are continuing to search Breivik’s property – a flat and farmhouse – in a wealthy suburb west of Oslo.

After much speculation about a motive for the attacks and whether foreign terrorists were responsible, the announcement that the man arrested is a Norwegian has been greeted with shock.

Will McCants, former US State Department Adviser on countering violent extremism, said: “We’ve never seen anything like this. A right-wing extremist bombs the nerve-centre of his home nation and then massacres dozens of his fellow citizens miles away.

“I will be shocked it he pulled it off alone. But if he did, it not only raises concerns about the rise of right-wing violence in Europe but also the rise of the super-empowered lone wolf.”