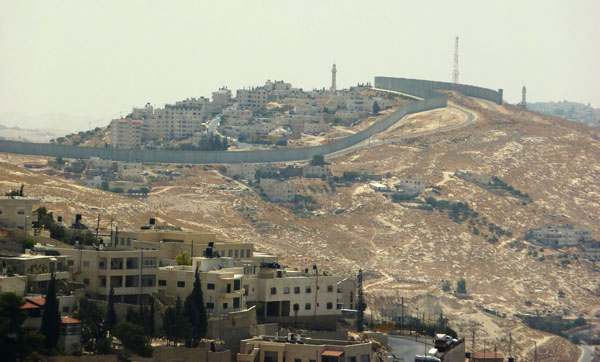 There was an element of tragicomedy to the situation. Me, the daughter of a dispossessed Palestinian, dressed up as a settler in order to enter the Israeli city of Jaffa.

With me was my American host, Sophie, who in April invited me as a writer-in-residence in Ramallah. An expert in checkpoint avoidance, she has lived with her Palestinian boyfriend for seven years and renews her visa every three months by pretending to have a lesbian Jewish lover.

As we approached the fortified checkpoint, we tied a scarf at the nape of our necks and proceeded to pose as settlers (lose the panicked ”will they let me pass or harass me?” look, sit up tall, act like you own the place).

After days of dehumanising encounters with heavily armed soldiers, this simple act raised us to the ranks of the privileged. The soldier waved us through with a conspiratorial smile – no need to worry, you’re not one of them.

There are many theories as to why a solution to the Israeli-Palestinian conflict remains elusive. They include the military occupation, Israel’s defiance of international law, US bias, the illegal settlements rendering a contiguous Palestinian state an impossibility, the suffocation of Gaza, the wall, the second-class status of Israeli-Arab citizens, the abysmal Palestinian leadership.

But, after my visit, I would argue that the oxygen feeding such injustices is a pervasive racism that simply sees Palestinians as inferior. I witnessed and experienced it first-hand.

On our arrival at the Sheikh Hussein bridge, a soldier wagged his finger at my father, born in Palestine in 1945, and warned him that he was visiting a Jewish state. ”Adnan,” he said, ”I will let you stay for seven days only.”

It was not lost on me that this ”boy” wasn’t even born when my father’s family endured the horrors of 1948, or were rendered stateless in 1967.

Time and again, I met Israelis who exhibited an unashamed sense of entitlement that seemed justified by a deeply held belief that Palestinians deserve their situation because they refuse to recognise Israel’s right to be a state that legally discriminates against them, granting differential legal rights and privileges to its own Jewish citizens and to Jews anywhere in the world. This model of racial division is entrenched.

In Australia, access to some roads depends on e-tags. There is something disturbing about visiting a country where road access is racially determined. Driving on roads reserved for settlers and non-West Bank Palestinians built on land confiscated from Palestinians – some of whom I met and who showed me the title deeds to their land – I noted the wide lanes, line markings and lighting.

The roads for Palestinians are disgraceful, winding through high hills and mountains with no bitumen, line markings, lanes or lights. It was like driving blindfolded on the road to the Blue Mountains.

I saw settlers swagger about at bus shelters, guns on display, as Palestinians stood several metres away, dutifully maintaining their place. I watched Palestinians herded into metal cages at Qalandiya Checkpoint, ordered about, often in the broken Arabic the soldiers have learned, although the swear words were always coherent. All this ostensibly because of security, when it is Palestinians who, for more than 60 years, have not known a single day of security.

I met a man whose vineyard had been seized by settlers and now works as an employee on his own land. But by far the most disturbing encounter was meeting men who, in desperation, had worked for Israelis to build the wall that has catastrophically robbed Palestinians of land, freedom of movement and a viable economy.

And yet, for all the suffering I witnessed, it is clear that today the weakest weapon in the Middle East is the gun. The idea of a state based on a pure race has long passed its use-by date. For all the laws, weapons and propaganda that seek to safeguard the ”purity” of a Jewish-only state, the Arab Spring has shown the world that there is nothing more powerful and formidable than the awakening of a grassroots majority. And it is an awakening to a most basic premise: that human rights are not to be earned or allocated according to race or bargaining power but are a universal entitlement, capable of embracing and celebrating Jewish and Palestinian aspirations, freedom and dignity.

Randa Abdel-fattah is an author and lawyer.

Tags: even Palestinians Freedom and dignity are basic rights for all Randa Abdel-Fattah