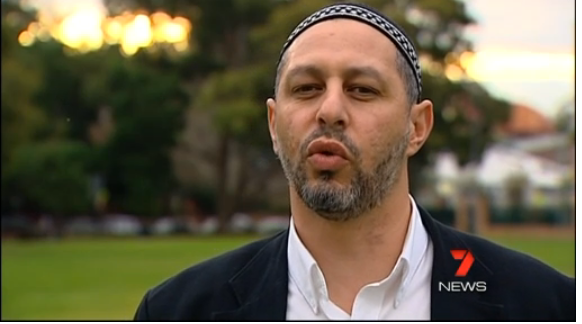 Channel seven reported that a man who recently converted to Islam in Western Sydney, was lashed by four men last night.

The man who reportedly converted to Islam recently had allegedly gone out for some alcoholic drinks with some friends. Four men allegedly of middle eastern appearance broke into the man’s apartment last night and lashed him for over half an hour as report by channel seven news at their 6:00PM program.

“There is no place for this criminal act in Islam… I hope those who did this are caught and subjected to the full extent of the law.” Ahmed Kilani, from MuslimVillage.com was shown on channel seven saying.

The 31 year old man was asleep in his apartment in Silverwater, woke up at around 1 am to four bearded men who had broken into his apartment. Three men held him down and the fourth lashed him with a cable 40 times.

The victim said that he believed Islam is a beautiful religion and that he hopes people don’t get the wrong idea about Islam because of this horrific event.

According to the report, the man made a complaint to Burwood police after the attack on Sunday but is now afraid and has since become hesitant to cooperate with authorities.

He told 7News that he believed Islam is a beautiful religion and he hoped what happened did not distort people’s view of the religion.

Forensic officers examined the apartment for evidence and are calling for help to identify the intruders.

The man who allegedly carried out the attack was described as being middle aged, strong build and around 175 cm tall, allegedly of middle eastern appearance, he is also bearded.

Anyone with information that could help the police find or identify these men should call Crime Stoppers on 1800 333 000.

UPDATE (10:02am): (from Ninemsn) The man told Auburn police he recognised the men from his local mosque and he believed they were carrying out a form of extreme Islamic punishment.