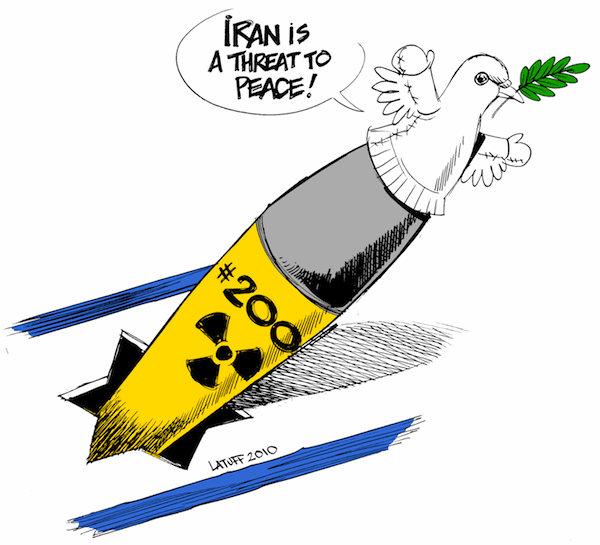 A longtime CIA officer who spent 21 years in the Middle East is predicting that Israel will bomb Iran this fall, dragging the United States into another major war and endangering U.S. military and civilian personnel (and other interests) throughout the Middle East and beyond.

Baer has had a storied career, including a stint in Iraq in the 1990s where he organized opposition to Saddam Hussein. (He was recalled after being accused of trying to organize Saddam’s assassination). Upon his retirement, he received a top decoration for meritorious service. Incidentally, George Clooney won an Oscar for playing a character based on Baer in the film Syriana (Baer also wrote the book).

Baer didn’t name sources for his prediction of an Israeli attack, but the few he did cite are all Israeli security figures who have publically warned that Netanyahu and Defense Minister Ehud Barak are hell-bent on war.

Baer is especially impressed by the unprecedented warning about Netanyahu’s plans by former Mossad chief, Meir Dagan. Dagan left the Israeli intelligence agency in September 2010 and two months ago predicted that Israel would attack and that doing so would be “the stupidest thing” he could imagine. According to Haaretz:

When asked about what would happen in the aftermath of an Israeli attack Dagan said that: “It will be followed by a war with Iran. It is the kind of thing where we know how it starts, but not how it will end.”

The Iranians have the capability to fire rockets at Israel for a period of months, and Hizbollah could fire tens of thousands of grad rockets and hundreds of long-range missiles, he said.

According to Ben Caspit of Israeli daily Maariv, Dagan’s blasts at Israel’s political leadership are significant not only because Mossad chiefs, in office or retired, traditionally have kept their lips sealed but also because Dagan is very conservative on security matters.

Caspit writes that Dagan is “one of the most rightwing militant people ever born here. … When this man says that the leadership has no vision and is irresponsible, we should stop sleeping soundly at night.”

Dagan describes the current Israeli government as “dangerous and irresponsible” and views speaking out against Netanyahu as his patriotic duty.

And his abhorrence of Netanyahu is not uncommon in the Israeli security establishment. According toThink Progress, citing the Forward newspaper, 12 of the 18 living ex-chiefs of Israel’s two security agencies (Mossad and Shin Bet), are “either actively opposing Netanyahu’s stances or have spoken out against them.” Of the remaining six, two are current ministers in Netanyahu government, leaving a grand total of four out of 18 who independently support the prime minister.

In short, while Congress dutifully gives Netanyahu 29 standing ovations, the Israelis who know the most about both Netanyahu and Israel’s strategic situation think he is a dangerous disaster.

But according to Baer, we ain’t seen nothing yet.

There is almost “near certainty” that Netanyahu is “planning an attack [on Iran] … and it will probably be in September before the vote on a Palestinian state. And he’s also hoping to draw the United States into the conflict,” Baer explained.

The Israeli air force would attack “Natanz and other nuclear facilities to degrade their capabilities. The Iranians will strike back where they can: Basra, Baghdad,” he said, and even Afghanistan. Then the United States would jump into the fight with attacks on Iranian targets. “Our special forces are already looking at Iranian targets in Iraq and across the border [in Iran] which we would strike. What we’re facing here is an escalation, rather than a planned out-and-out war…it’s a nightmare scenario. We don’t have enough troops in the Middle East to fight a war like that. I think we are looking into the abyss.”

Masters asked Baer why the U.S. military is not mobilizing to stop this war from happening. Baer responded that the military is opposed, and so was the civilian head of the military, former Secretary of Defense Robert Gates, who used his influence to thwart an Israeli attack during the Bush and Obama administrations. But he’s gone now and “there is a warning order inside the Pentagon” to prepare for war.

It should be noted that the Iranian regime is quite capable of triggering a war with the United States on its own through some combination of colossal stupidity and sheer hatred. In fact, Baer says, the Iranian Revolutionary Guard would welcome a war. They are “paranoid.” They are “worried about … what’s happening to their country economically, in terms of the oil embargo and other sanctions.” And they are worried about a population that increasingly despises the regime.

They need an external enemy. Because we are leaving Iraq, it’s Israel. But in order to make this threat believable, they would love an attack on their nuclear facilities, love to go to war in Bahrain and Saudi Arabia and Iraq and hit us where they could. Their defense is asymmetrical. We can take out all of their armored units. It’s of little difference to them, same with their surface-to-air missile sites. It would make little difference because they would use terrorism. They would do serious damage to our fleet in the Gulf.

Given all that, is it possible that the United States would allow Israel to attack when the president knows “we would be forced” to join the war on Israel’s side?

Baer’s response: “the President is up for re-election next year” and Israel is “truly out of control.”

What happens when you see 100 F-16’s approaching Iraq and there is a call to the White House [from Netanyahu] that says “We’re going in, we’re at war with Iran”? What does the President of the United States do? He has little influence over Bibi Netanyahu. …We can’t stop him. And he knows it.

It’s a pretty frightening scenario, made infinitely more so by the fact that top Israelis (who have heard Netanyahu’s thinking from Netanyahu himself) also see the future the same way. Those Israelis deserve a world of credit for sounding the warning bell loud enough that we would hear it and do something about it – although it’s impossible to know if the people who matter are paying attention.

Actually, only one person matters: the president. If Israel bombed Iran tomorrow, Congress would forget all about partisan differences and run, not walk, to the House and Senate floors to endorse the attack and call for unstinting support for Israel. That is what Congress always does, and will always do so long as the lobby (and the donors it directs) are the key players in making our Middle East policies.

And who knows what Obama would do? So far, he has not exactly distinguished himself when it comes to standing up to Netanyahu.

But an Israeli attack on Iran would be different. It would endanger countless Americans (in the region and here at home, too). It would kill off any economic recovery by causing oil prices to skyrocket. It would engulf us in another Middle East war. And it would threaten the existence of the state of Israel.

This is something the President needs to focus on instead of being forced to nickel and dime with the likes of  Eric Cantor and Mitch McConnell. How incredible that these two, and their right-wing allies, have our government tied in knots in their incessant effort to elevate themselves by destroying the President of the United States. When did Congressional leaders decide that the only thing that matters is not national security — but their party’s fortunes and, mostly, their own? It is sickening.