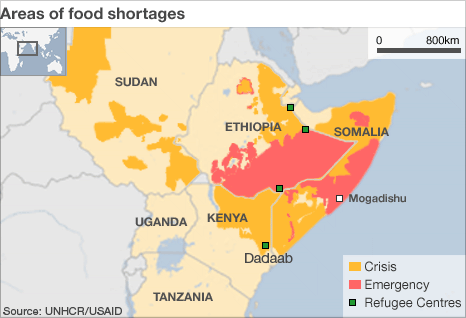 The levels of malnutrition among children fleeing Somalia’s drought could lead to a “human tragedy of unimaginable proportions”, the UN refugee head Antonio Guterres has said.

Young children are dying on their way to or within a day of arrival at camps in Ethiopia and Kenya, the UNHCR says.

It estimates that a quarter of Somalis are either displaced within the country or living outside as refugees.

The worst drought in 60 years has been compounded by the violence in Somalia.

“It’s so extreme,” said UNHCR spokeswoman Melissa Fleming. “Our people are saying they’ve never seen anything like it.”

The warning comes as the UK aid agencies Oxfam, Save the Children, and the Red Cross launch emergency appeals in response to the food crisis which is affecting more than 12 million people in the Horn of Africa.

The agencies are collectively asking for nearly $150m (£93m).

The UNHCR says the need for food, shelter, health services and other life saving aid is urgent and massive.

The agency says more than 50% of Somali children arriving in Ethiopia are seriously malnourished. In Kenya, that figure is between 30% and 40%.

“What is the most tragic for us to witness, is that there are children who do arrive in such a weakened state that despite our emergency care and therapeutic feeding, they’re dying within 24 hours,” Ms Fleming told a press briefing in Geneva.

“We estimate that one quarter of Somalia’s 7.5 million people are now either internally displaced or are living outside the country as refugees,” she said.

The UNHCR recently opened a third camp in south-eastern Ethiopia, which is quickly reaching its capacity of 20,000, and is now planning further camps.

A relief plane chartered by the agency is flying to Addis Ababa on Tuesday and a convoy of 20 trucks carrying tents and other aid is on its way as well.

In north-east Kenya’s Dadaab refugee camp, some 1,400 refugees are arriving every day. Aid agencies fear numbers could rise to half a million.

Badu Katelo, Kenya’s Commissioner for Refugee Affairs, said food and water distribution, shelter and space were all over stretched and that the security situation was getting worse.

“We would like to see a vibrant, committed intervention from the international community,” he said.

The BBC’s Ben Brown, at the Dadaab camp, says infant mortality has risen threefold, with many children under the age of five dying within a few days of arrival.

Families have walked for days with hardly any food or water to reach the camp, says our correspondent – some say they were robbed or raped on the way or attacked by animals.

Some say they have to wait days on reaching the camp before being given more than a few basic rations. 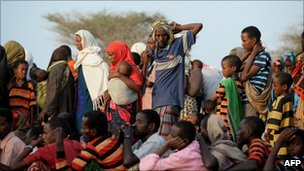 Nicholas Wasunna, senior adviser for World Vision in Kenya, said malnutrition in children under five could affect them for the rest of their lives.

“If they do not get the nutritional requirement they need in the first five years of their lives, there will be stunting and this [is] irreversible, and therefore they will never be able to live really their full potential,” he said.

“We have to see as something we address immediately because it is unacceptable that children should be stunted.”

Ms Fleming said there was no sign of the exodus of Somalis ending.

“The relentless violence that’s compounded by a terrible drought has forced more than 135,000 Somalis to flee Somalia so far this year,” she said.

“In June alone, 54,000 people fled across the two borders, and that is three times the number [of people who fled] in May. So this is a huge spike.”

Somalia has been racked by constant war for more than 20 years – its last functioning national government was toppled in 1991.