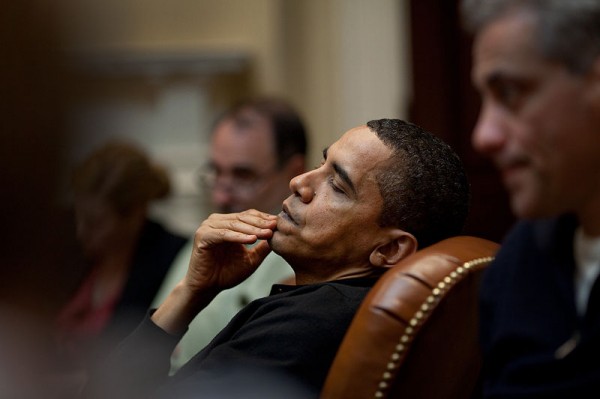 The International Monetary Fund and the European Central Bank are violating their charters in order to bail out French, German, and Dutch private banks. The IMF is only empowered to make balance of payments loans, but is lending to the Greek government for prohibited budgetary reasons in order that the Greek government can pay the banks. The ECB is prohibited from bailing out member country governments, but is doing so anyway in order that the banks can be paid.  The German parliament approved the bailout, which violates provisions of the European Treaty and Germany’s own Basic Law. The case is in the German Constitutional Court, a fact unreported in the US media.

US president George W. Bush’s designated lawyer ruled that the president has “unitary powers” that elevate him above statutory US law, treaties, and international law.  According to this lawyer’s legal decisions, the “unitary executive” can violate with impunity the Foreign Intelligence Surveillance Act, which prevents spying on Americans without warrants obtained from the FISA Court. Bush’s man also ruled that Bush could violate with impunity the statutory US laws against torture as well as the Geneva Conventions. In other words, the fictional “unitary powers” make the president into a Caesar.

Constitutional protections, such as habeas corpus, which prohibit government from holding people indefinitely without presenting charges and evidence to a court, and which prohibit government from denying detained people due process of law and access to an attorney, were thrown out the window by the US Department of Justice, and the federal courts went along with most of it.

As did Congress, “the people’s representatives”.  Congress even enacted the Military Tribunals Commissions Act of 2006, signed by the White House Brownshirt on October 17.

This act allows anyone alleged to be an “unlawful enemy combatant” to be sentenced to death on the basis of secret and hearsay evidence not presented in the kangaroo military court placed out of reach of US federal courts.  The crazed nazis in Congress who supported this total destruction of Anglo-American law masqueraded as “patriots in the war against terrorism.”

The act designates anyone accused by the US, without evidence being presented, as being part of the Taliban, al-Qaeda, or “associated forces” to be an “unlawful enemy combatant,” which strips the person of the protection of law.

The Taliban consists of indigenous Afghan peoples, who, prior to the US military  intervention, were fighting to unify the country.  The Taliban are Islamist, and the US government fears another Islamist government, like the one in Iran that was blowback from US intervention in Iran’s internal affairs. The “freedom and democracy” Americans overthrew an elected Iranian leader and imposed a tyrant. American-Iranian relations have never recovered from the tyranny that Washington imposed on Iranians.

Washington is opposed to any government whose leaders cannot be purchased to perform as Washington’s puppets. This is why George W. Bush’s regime invaded Afghanistan, why Washington overthrew Saddam Hussein, and why Washington wants to overthrow Libya, Syria, and Iran.

Barack Obama inherited the Afghan war, which has lasted longer than World War II with no victory in sight.  Instead of keeping with his election promises and ending the fruitless war, Obama intensified it with a “surge,”

The war is now ten years old, and the Taliban control more of the country than does the US and its NATO puppets. Frustrated by their failure, the Americans and their NATO puppets increasingly murder women, children, village elders, Afghan police, and aid workers.

A video taken by a US helicopter gunship, leaked to Wikileaks and released, shows American forces, as if they were playing video games, slaughtering civilians, including camera men for a prominent news service, as they are walking down a peaceful street. A father with small children, who stopped to help the dying victims of American soldiers’ fun and games, was also blown away, as were his children. The American voices on the video blame the children’s demise on the father for bringing kids into a “war zone.” It was no war zone, just a quiet city street with civilians walking along.

The video documents American crimes against humanity as powerfully as any evidence used against the Nazis in the aftermath of World War II at the Nuremberg Trials.

Perhaps the height of lawlessness was attained when the Obama regime announced that it had a list of American citizens who would be assassinated without due process of law.

One would think that if law any longer had any meaning in Western civilization, George W. Bush, Dick Cheney, indeed, the entire Bush/Cheney regime, as well as Tony Blair and Bush’s other co-conspirators, would be standing before the International Criminal Court.

What is Gadaffi’s crime?  His crime is that he is attempting to prevent Libya from being overthrown by a US-supported, and perhaps organized, armed uprising in Eastern Libya that is being used to evict China from its oil investments in Eastern Libya.

Libya is the first armed revolt in the so-called “Arab Spring.” Reports have made it clear that there is nothing “democratic” about the revolt.

The West managed to push a “no-fly” resolution through its puppet organization, the United Nations. The resolution was limited to neutralizing Gadaffi’s air force.  However, Washington, and its French puppet, Sarkozy,  quickly made an “expansive interpretation” of the UN resolution and turned it into authorization to become directly involved in the war.

Gadaffi has resisted the armed rebellion against the state of Libya, which is the normal response of a government to rebellion. The US would respond the same as would the UK and France.  But by trying to prevent the overthrow of his country and his country from becoming another American puppet state, Gadaffi has been indicted. The International Criminal Court knows that it cannot indict the real perpetrators of crimes against humanity–Bush, Blair, Obama, and Sarkozy–but the court needs cases and accepts the victims that the West succeeds in demonizing.

In our times, everyone who resists or even criticizes the US is a criminal. For example, Washington considers Julian Assange and Bradley Manning to be criminals, because they made information available that exposed crimes committed by the US government. Anyone who even disagrees with Washington, is considered to be a “threat,” and Obama can have such “threats” assassinated or arrested as a “terrorist suspect” or as someone “providing aid and comfort to terrorists.”  American conservatives and liberals, who once supported the US Constitution, are all in favor of shredding the Constitution in the interest of being “safe from terrorists.” They even accept such intrusions as porno-scans and sexual groping in order to be “safe” on air flights.

The Supreme Court also ruled on June 27 that California violated the US Constitution by banning the sale of violent video games to kids, despite evidence that the violent games trained the young to violent behavior.  It is fine with the Supreme Court for soldiers, whose lives are on the line, to be prohibited under penalty of law from drinking beer before they are 21, but the idiot Court supports inculcating kids to be murderers, as long as it is in the interest of corporate profits, in the name of “free speech.”

Amazing, isn’t it, that a court so concerned with ‘free speech”  has not protected American war protesters from unconstitutional searches and arrests, or protected protesters from being attacked by police or herded into fenced-in areas distant from the object of protest.

As the second decade of the 21st century opens, those who oppose US hegemony and the evil that emanates from Washington risk being declared to be  “terrorists.” If they are American citizens, they can be assassinated.  If they are foreign leaders, their country can be invaded.  When captured, they can be executed, like Saddam Hussein, or sent off to the ICC, like the hapless Serbs, who tried to defend their country from being dismantled by the Americans.

And the American sheeple think that they have “freedom and democracy.”

Washington relies on fear to cover up its crimes. A majority of Americans now fear and hate Muslims, peoples about whom Americans know nothing but the racist propaganda which encourages Americans to believe that Muslims are hiding under their beds in order to murder them in their sleep.

The neoconservatives, of course, are the purveyors of fear.  The more fearful the sheeple, the more they seek safety in the neocon police state and the more they overlook Washington’s crimes of aggression against Muslims.

Safety uber alles. That has become the motto of a once free and independent American people, who once were admired but today are despised.

In America lawlessness is now complete.  Women can have abortions, but if they have stillbirths, they are arrested for murder.

Americans are such a terrified and abused people that a 95-year old woman dying from leukemia traveling to a last reunion with family members was forced to remove her adult diaper in order to clear airport security. Only a population totally cowed would permit such abuses of human dignity.

In a June 27 interview on National Public Radio, Ban Ki-moon, Washington’s South Korean puppet installed as the Secretary General of the United Nations, was unable to answer why the UN and the US tolerate the slaughter of unarmed civilians in Bahrain, but support the International Criminal Court’s indictment of Gadaffi for defending Libya against armed rebellion. Gadaffi has killed far fewer people than the US, UK, or the Saudis in Bahrain. Indeed, NATO and the Americans have killed more Libyans than has Gadaffi. The difference is that the US has a naval base in Bahrain, but not in Libya.

There is nothing left of the American character. Only a people who have lost their soul could tolerate the evil that emanates from Washington.