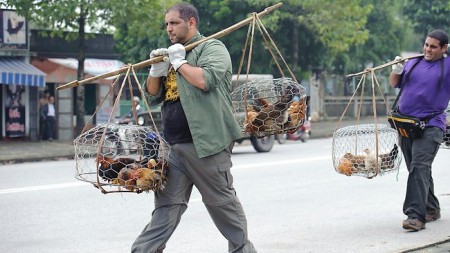 For the first time in my life I’ve wished reality could represent reality TV.

After almost a fortnight, my friend Mos (Mostafa) and I were eliminated from The Amazing Race Australia. Our appearance on the show was a milestone. It was the first time that two Muslim guys had a substantial presence on a commercial TV show without being the rapist, terrorist or the token beloved Muslim role model.

Until I went on The Amazing Race, I had always imagined Australia to be a pretty divided place – especially when it came to race relations and, more specifically, Muslims.

I’d heard on the news how “multiculturalism had failed”, witnessed the Cronulla riots, watched Muslim jihadists in Lakemba talk badly about this country on TV and seen the rise and fall of Pauline Hanson.

And to be honest, until I got on the race … well, sure I had plenty of non-Muslim friends, but they were the nice ones that live in the inner city and like diversity. None of them were what you would call “salt of the earth” or the “battlers”. It was not intentional, but really just a consequence that we all face – which is that as humans, we usually interact with people of similar political, cultural and economic backgrounds.

Then we got to the start line of the race and for the first time I saw 20 other Australians whom I just normally would never imagine mixing with.

There were the much-loved Big W mums – who told me how much they enjoyed their nightly diet of Today Tonight – as well as the female models, bikers with tattoos and the farmers from north Queensland.

I wondered how these “authentic non-latte-sipping Australians” would react to the two Muslims. And how would we react to them?

For them, despite all my praying and consumption of halal meals, there was no seeing me as someone secretly harbouring a desire for the destruction of Western civilisation. I, too, never saw them as the evil racist white Australians who get portrayed overseas or perceived by some insular migrant communities in Australia.

The race united us and, with every step of the way, we found more similarities with each other. Our difference was simply incidental if not a point of conversation. I learned a huge lesson on The Amazing Race and it’s something that should ring true with everyone. No matter if you’re Muslim, Jewish, black, white, gay or straight – our differences usually fade away when we work for a common goal.

At the footy, I’ve never experienced racism – as long as we were wearing the same scarf or hated Collingwood.

And, when it came to wider Australia, the reaction from the fans was overwhelming. Two fat self-deprecating Muslims on TV and the walls of difference came crashing down.

Whether it’s a reality TV show, bushfire relief, sport, or trying to fix the neighbourhood, colour, race, sexuality and religion mean nothing when we work for something greater than ourselves. That doesn’t mean we can’t be different – it just means that when we stop trying to find fault with those unlike ourselves and move forward, much can be achieved. I hope our politicians (and al-Qaida) are listening.

The reality of modern Australia is that despite all the talk of “Australia being a racist country” or “migrants aren’t assimilating”, most of us are just getting on with our lives peacefully and getting the job done. It’s a story that really isn’t being told, and it should be.