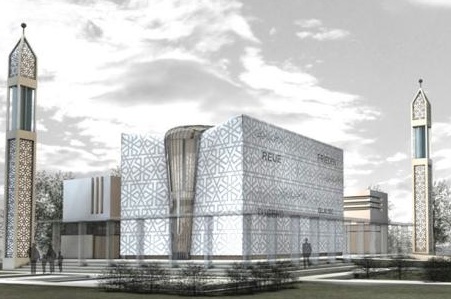 In a new drive to boost their country’s renewable power generation, German Muslims are planning a mosque equipped with wind turbines in its minarets to generate electricity, the first-ever building in the world.

“We thought about how we could incorporate this important symbolic element of religious architecture and provide it with a new function,” architect Selcuk Unyilmaz told The National newspaper on Thursday, June 23.

Planned to be built in Norderstedt, a town near Hamburg, the mosque’s two minarets will be equipped with wind turbines to generate electricity.

Instead of having rotor blades, the 22-meter-high minarets will have fins to generate electricity from wind.

The turbines are aimed to generate 30% of the mosque’s energy needs.

“The function of the minaret in the classic sense is receding in Europe because the muezzins don’t climb them to call to prayers,” Unyilmaz said.

“Even in Islamic countries a microphone is increasingly used.

“Only by using the minarets in this way was I able to reconcile them with the construction budget,” added the Turkish-born architect.

The mosque is part of efforts by Germany’s Muslims to enhance their country’s drive towards renewable power generation.

“The environment is an important issue at present, so this made sense,” said Unyilmaz.

German Chancellor Angela Markel has announced plans to raise the share of renewable power generation to 80% by 2050, from 17% now.

“Everyone has a duty to protect the environment,” said Unyilmaz.

Germany has between 3.8 and 4.3 million Muslims, making up some 5 percent of the total 82 million population, according to government-commissioned studies.

There are about 200 mosques under construction or being planned in Germany, more than anywhere else in Europe.

German Muslims are now working to raise the €2.5 million (Dh13.2m) needed for the mosque.

“We have to cover it all through donations,” Ugur Sutcu, a member of the congregation’s board, said.

“If we manage to raise half, the banks would provide the rest of the funding.”

Sutcu said that the new mosque is strongly supported by the Muslim minority.

“Everybody here was delighted with the design,” he said.

“We want to go ahead with this because our current mosque is an ordinary-looking 100 year-old-building and people who pass by don’t recognize it as a mosque.”

The new mosque is seen as evidence on successful Muslim integration in Germany.

“In future everyone will grow together, and in 50 to 100 years it may be that no one in the community speaks Turkish anymore,” said Unyilmaz, who has lived in Germany for the past 35 years.

“But the faith will remain forever, even after the origins have faded.

“We already feel like German Muslims. How will our children and grandchildren feel? It is for them that I presented this concept.”

Many Germans have already praised the new mosque plans.

“It’s not inconceivable that on windy days the eco-mosque could – Inshallah – produce more than it requires for its own purposes,” Die Zeit, a national weekly newspaper, wrote in a light-hearted editorial this month.

“That’s integration: an environmentally friendly Islam with a carbon-neutral call to prayers. How can anyone claim this religion doesn’t belong to Germany?”

Germans have grown hostile to the Muslim presence recently, with a heated debate on the Muslim immigration into the country.

A recent poll by the Munster University found that Germans view Muslims more negatively than their European neighbours.

Germany’s daily Der Spiegel had warned last August that the country is becoming intolerant towards its Muslim minority.