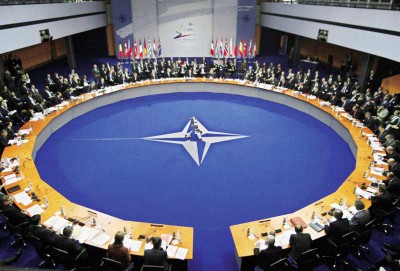 Last week, a feature by Secretary of State Hillary Clinton excoriating the political leadership of Syria appeared in the London-based Arabic-language daily Asharq Al-Awsat. Saudi-supported and printed in twelve locations, it is considered to be among the most influential newspapers in the Arab world.

As such, her comments (in English and Arabic) were intended to signal to Arab readers and the world at large that the American position toward Damascus is becoming more stringent and confrontational, evoking Clinton’s statements toward the leadership of Ivory Coast and Libya earlier in the year.

“In his May 19 speech, President Obama echoed demonstrators’ basic and legitimate demands…President Assad, he said, could either lead that transition or get out of the way.

“It is increasingly clear that President Assad has made his choice.”

“…President Assad is showing his true colours by embracing the repressive tactics of his ally Iran and putting Syria onto the path of a pariah state.

“By following Iran’s lead, President Assad is placing himself and his regime on the wrong side of history…”

“If President Assad believes he can act with impunity because the international community hopes for his cooperation on other issues, he is wrong about this as well. He and his regime are certainly not indispensable.”

The Wall Street Journal reported on June 18 that the Washington administration is preparing a case against Syrian President Bashar Assad and other government officials at the International Criminal Court in the Hague. The same newspaper feature added that “The U.S. is also exploring ways to more directly target Syria’s oil and gas revenue…”

On June 14 four members of the North Atlantic Treaty Organization, including the military alliance’s three European powerhouses – Britain, France, Germany and Portugal – proposed a draft resolution in the United Nations Security Council aimed at Syria. Three days later in Berlin German Chancellor Angela Merkel and French President Nicolas Sarkozy confirmed their governments would push for a new UN resolution targeting Syria. In Sarkozy’s words: “France, hand in hand with Germany, calls for tougher sanctions against Syrian authorities who are conducting intolerable and unacceptable actions and repression against the population.”

The USS George H.W. Bush nuclear-powered supercarrier and its assigned carrier strike group and carrier air wing – with 9,000 sailors, 70 aircraft and four guided missile destroyers and cruisers – is in the Mediterranean Sea not far from the Syrian coast. One of the destroyers, USS Truxtun, just left the Israeli port city of Haifa after a two-day stopover.

The USS Monterey guided missile cruiser is docked off the Georgian Black Sea city of Batumi currently and will re-enter the Mediterranean soon. Deployed as the first warship assigned to the U.S.-NATO potential first-strike pan-European interceptor missile system, it can launch Tomahawk cruise missiles as well as Standard Missile-3 interceptor missiles.

The guided missile destroyer USS Barry left Gaeta, Italy where nine other US. warships have been stationed, on June 17 after a five-day port visit. USS Barry is part of the Bataan Amphibious Ready Group, headed by the amphibious assault ship USS Bataan, used at the beginning of the U.S.-NATO Libyan campaign in March and currently in the Mediterranean.

The Pentagon and its allies – every nation in the Mediterranean is now a NATO member or partner except for Libya, Syria, Cyprus (under renewed and intensified pressure to join the bloc’s Partnership for Peace program) and Lebanon (whose coastline has been blockaded by NATO states’ military vessels since 2006) – have the military hardware in place for a replication of the 95-day war against Libya directed at Syria: Scores of warplanes on carriers and on bases in Italy, Greece, Cyprus and Turkey and guided missile ships ready to launch Tomahawk missiles.

On June 19 Ersat Hurmuzlu, senior adviser to Turkish President Abdullah Gul, told the United Arab Emirates-based Al Arabiya television channel that Syria has less than a week to respond to what Reuters described as “calls for change.” Hurmuzlu’s exact words were:

“The demands in this field will be for a positive response to these issues within a short period that does not exceed a week.

“The opposite of this, it would not be possible to offer any cover for the leadership in Syria because there is the danger …that we had always been afraid of, and that is foreign intervention.”

Although the last sentence can be read as either warning or threat, it is in fact the second. The statement as a whole is an ultimatum.

Since the war against Libya was launched by U.S. Africa Command under the codename Operation Odyssey Dawn to the present NATO-run Operation Unified Protector in place since March 31, air operations have been run from NATO’s Air Command Headquarters for Southern Europe in Izmir, Turkey.

In March Turkey supplied five ships and a submarine for the blockade of Libya’s coast and on March 28 Hurriyet Daily News announced that Turkey was “assuming control of the Benghazi airport, and sending naval forces to patrol the corridor between the rebel-held city and Crete,” quoting Prime Minister Recep Tayyip Erdogan:

“Turkey said ‘yes’ to three tasks within NATO: the takeover of Benghazi airport for the delivery of humanitarian aid, the task about control of the air corridor and the involvement of Turkish naval forces in the corridor between Benghazi and Crete.”

In 2003 the U.S. ambassador to NATO at the time, Nicholas Burns, stated in testimony to the Senate Foreign Relations Committee:

“NATO needs to pivot from its inward focus on Europe – which was necessary and appropriate during the Cold War – to an outward focus on the arc of countries where most of the threats are today – in Central and South Asia, and in the Middle East.

“NATO’s mandate is still to defend Europe and North America. But we don’t believe we can do that by sitting in Western Europe, or Central Europe, or North America. We have to deploy our conceptual attention and our military forces east and south. NATO’s future, we believe, is east, and is south. It’s in the Greater Middle East.”

Earlier this month Turkish Defense Minister Vecdi Gonul announced that Izmir will also be the new home of the Alliance’s Land Force Command, consolidating and transferring ground forces currently stationed in Germany and Spain to the Izmir Air Station.

On June 17 Turkey took over command of Standing NATO Maritime Group-2 which, with Standing NATO Maritime Group-1, is part of the NATO Response Force and centers its activities in the Mediterranean. Each group consists of between 4-8 warships – destroyers and frigates – and since 2005 has expanded its missions through the Suez Canal to the Gulf of Aden and the Somalia coast, circumnavigating the African continent in 2007 and traveling the length of the Atlantic coast of the U.S., then entering the Caribbean Sea the same year, the first time NATO had ever deployed to the Caribbean. The NATO naval groups have also sailed to Africa’s Gulf of Guinea, the Persian Gulf and the Baltic Sea among other locations.

Turkey hosted a conference of Syrian opposition forces called “Change in Syria” from May 1-June 2 in the city of Antalya. Although held under the sponsorship of the Egyptian-based National Organisation of Human Rights, logistics and security were provided by the host country.

Had Syria allowed a gathering of Turkish opposition groups whose express intention was the overthrow of the government in Ankara, one can only imagine the Turkish administration’s reaction.

On June 13 Britain’s The Guardian, since the Balkans crisis began in the early 1990s never slow to fan the flames of moral panic over humanitarian crises, with techniques ranging from hyperbole to hysterics, in order to alarm and neutralize its readership into acquiescence to Western military action (while claiming formally, if not convincingly, that it is not advocating the latter), ran an editorial titled “Syria: Butchery, while the world watches,” which let the cat out of the bag regarding the prospect of U.S. and NATO military intervention in Syria by stating:

“Turkey, a member of Nato, could yet drag the west in, if it decides its own interests require action to defend its borders from the [Syrian] refugees. The world would then pay a high price indeed for having pretended that Assad was somebody else’s problem.”

On June 19 the major Turkish daily newspaper Zaman quoted Veysel Ayhan of the Centre for Middle Eastern Strategic Studies harking back to the rationale for NATO’s first military actions 16 years ago:

“Remember when NATO was accused by the international media and public of not being able to prevent 8,000 Muslim Bosnians from being murdered in front of the world’s eyes? As a member of NATO and a country whose border is about to witness such a massacre by the Syrian army, Turkey will not allow such a thing to happen again, especially before its own eyes.”

Last week Turkey’s President Erdogan and Foreign Minister Ahmet Davutoglu were reported to have toughened demands on Syria in a meeting with President Assad’s special envoy Hasan Turkmani in Ankara, and on January 18 Al Arabiya reported that Ankara had dispatched an envoy to Damascus to demand that Assad’s brother Maher relinquish his command of the Republican Guard and the Fourth Armoured Division.

Zaman recently cited what was identified as a pro-government Syrian official saying to the United Arab Emirates-based daily The National:

“The West wants to put the region under Turkish control like in the Ottoman days. Turkey is a NATO member and embodies a safe kind of Islam for the West, so they have done a deal to give everything to Ankara.”

Should a conflict erupt between Turkey and Syria on their border, NATO will be obligated under its Article 5 collective military assistance clause to enter the fray on Turkey’s side. Should NATO intend opening hostilities against Syria, no better pretext could be devised than that scenario.

In February of 2003, on the eve of the U.S. and British invasion of Iraq, in NATO’s words “Turkey requested NATO assistance under Article 4 of the North Atlantic Treaty.”

“NATO’s Integrated Air Defence System in Turkey was put on full alert and augmented with equipment and personnel from other NATO commands and countries.”

Four Alliance Airborne Warning and Control System (AWACS) aircraft were deployed from their base in Germany to the Forward Operating Base in Konya, Turkey. Three Dutch and two American Patriot missile batteries were deployed to the country in March of that year, and “Preparations were made to augment Turkey’s air defence assets with additional aircraft from other NATO countries.”

“The Parties will consult together whenever, in the opinion of any of them, the territorial integrity, political independence or security of any of the Parties is threatened.”

“The Parties agree that an armed attack against one or more of them in Europe or North America shall be considered an attack against them all and consequently they agree that, if such an armed attack occurs, each of them, in exercise of the right of individual or collective self-defence recognised by Article 51 of the Charter of the United Nations, will assist the Party or Parties so attacked by taking forthwith, individually and in concert with the other Parties, such action as it deems necessary, including the use of armed force, to restore and maintain the security of the North Atlantic area.”

If Turkey opens armed hostilities with its neighbour, the conflict will not remain a local one for long.