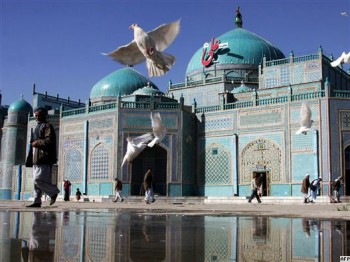 It could look like the oasis of peace that is the Blue Mosque standing in its flower-filled park in the centre of Mazar-e Sharif.

Afghanistan once attracted thousands of tourists before its decades of war began, and here it is easy to see why.

The block-sized park is surrounded by the noise of a modern city. It is girded on every side by streets with racing traffic, small shops, and sidewalk bazaars filled with crowds.

But as soon as you enter the park, the urban noise recedes. There is the laughter of children and the cooing of doves. Dozens of children with their parents and hundreds, no thousands, of snow white doves waddling across the rose-lined paths, pecking at the ground, and soaring overhead.

The white doves act like they live here and they do. They have been raised by the Blue Mosque’s attendants since it was built in the 12th century and they have become one of its famous symbols. 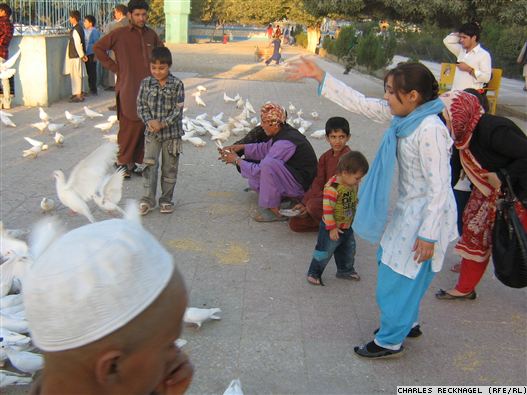 Legend has it that the doves are pure white because of the sanctity of the mosque itself; if a dove with a speck of colour flies in and stays, it too will turn white as snow.

To one side of the mosque complex is the pigeon house. It is a large, low concrete box with small windows and most of its space below ground. This is where the doves nest and breed year-round. It is also where they are fed. 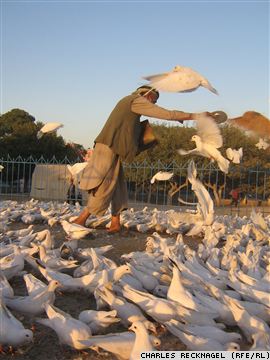 On the building’s flat roof, an old man is scattering seed by the tinful, appearing and disappearing in a cloud of white wings.

But it is the Blue Mosque in the centre of the park that rivets your attention. It is truly blue, with its sides dressed in thousands of colourful and intricately patterned tiles that shimmer in the sunlight like a mirage. All the paths lead to it, and almost everyone who comes to the park visits it.

At the door of the mosque complex, you check your shoes and enter an ancient setting. Between prayers, families stroll the mosque’s flagstone court and some visit the mosque’s small museum.

There are many pilgrims here, too, who have come from all over Afghanistan and beyond. They visit the shrine of Hazrat Ali, which forms the largest wing of the complex and can only be entered by the faithful.

The shrine houses the tomb of Ali, the cousin and son-in-law of the Prophet Muhammad. People here believe his body was moved to Afghanistan from its original burial place in Al-Najaf, Iraq, sometime early in the history of Islam.

It was a local mullah who discovered Ali’s new resting place at the beginning of the 12th century. He had a dream in which Ali appeared to reveal that he had been secretly buried near the ancient city of Balkh, whose ruins still stand some 20 kilometres west of Mazar-e Sharif. The Seljuk sultan of the time, Ahmed Sanjar, ordered a shrine to be built on the location revealed to the mullah and that shrine is today’s Blue Mosque.

The shrine itself has had a tumultuous history. It was destroyed by Genghis Khan and his Mongol army in the 13th century. But it was rebuilt and has always been the most significant place of pilgrimage in Afghanistan, both for Shi’ite and Sunni Muslims. 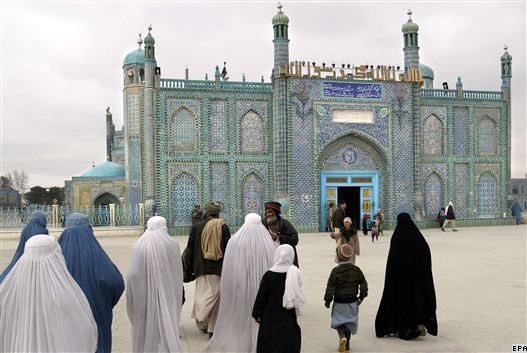 When it is time for prayer, the sound of the muezzin’s voice rings out over the mosque complex from one of the four corner minarets.

It is possible to meet the muezzin as he leaves his room at the base of the minaret and joins the crowd heading to the prayer hall.

Qari Shir Ahmad Ansari says he has been chanting the call to prayer at the Blue Mosque for 18 years and that his father did so before him. Little has changed over the generations, he adds, apart from adding a loudspeaker system.

In his father’s time, four muezzins stood at the top of the minaret and called out in perfect unison, each facing a different direction. Then, just as today, the call could be heard across the center of the city. 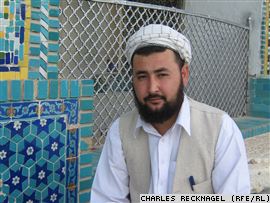 He says that muezzins give the Azan, or call to prayer, its true, pure tone by cupping their hands over their ears, as singers do, to hear themselves.

“Based on the Hadith, or the Prophet [Muhammad’s] saying, when we chant we raise our hands up to our ears and start the Azan with the phrase ‘God is great,'” Ansari says. “The special thing about Azan is that we take ablution [beforehand] and then call the faithful to come pray at a sacred place.”

The muezzin hurries off to pray, leaving visitors to admire the tiles that cover the mosque’s exterior. There are countless thousands of individual tiles, most about the size of a hand, and each composing a piece of a larger mosaic pattern. The larger patterns themselves vary from one part of the mosque’s exterior to another, turning the whole into a swirling, abstract, and almost otherworldly vision.

The sense of otherworldliness is an ancient trick of Islamic architecture. Distracted by the colors and designs of the tiles, the viewer forgets to notice the solid structure of the building itself or think about the physical laws that hold it up. Instead, the building appears weightless, like a miracle hovering on earth.

Where do these beautiful tiles come from? The men who make the tiles have a small workshop just outside the mosque complex. They are surprised to receive visitors but ready to offer tea and answer questions.

“I am Mohammad Shah, head tile maker at the Blue Mosque,” one says by way of introduction. “I have been in the business for 24 years. Whenever there is something wrong with the tiles on the walls, or if some visitors pry off some tiles and take them away, we fix the damage.” 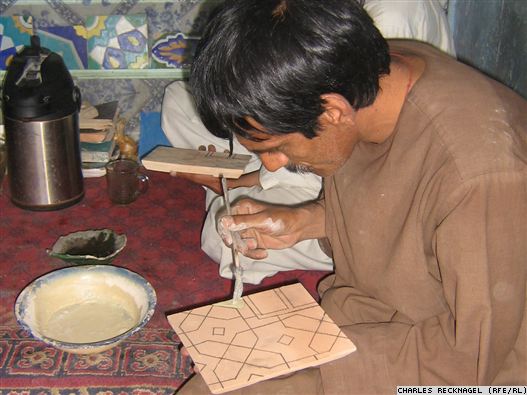 In the workshop, one of Shah’s assistants is making clay by pouring water over a mound of earth on the floor and treading on it to get the right consistency. Others are taking dry tiles and tracing patterns on them before they are painted and fired in the kiln. The workshop looks surprisingly busy.

Shah says the Blue Mosque needs constant upkeep. Pilgrims often break small corners off its famous tiles to take home as treasured mementos. But the real damage is from the elements, because there is little money, apart from the pilgrims’ donations that support the mosque, to weatherproof the walls as needed.

“This apparatus produces 6 square meters of tile per month,” Shah says, as he shows off the workshop’s aging kiln. “And all of the six meters square is used; even one tile does not remain unused. This is because the Rawza-e Sharif [the mosque] has been ruined very much; many tiles are damaged and have fallen off. If this tile-producing kiln were not available, the mosque would have turned into a ruined place.” 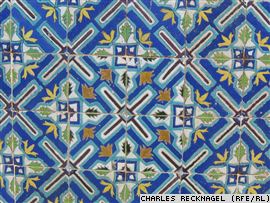 Each damaged tile, he notes, has to be individually duplicated by the artisans. There is a row of broken tiles awaiting replication in the alcove where he and another master tile maker sit. The two masters are teaching their skills to seven apprentices whom they hope will continue preserving the mosque for another generation.

Outside, the Blue Mosque staggers visitors with its beauty. If tiles are missing here and there, it is not what the eye notices.

The tile makers may feel they are in an impossible race to keep up, but the mosque ensemble itself rises above such concerns.