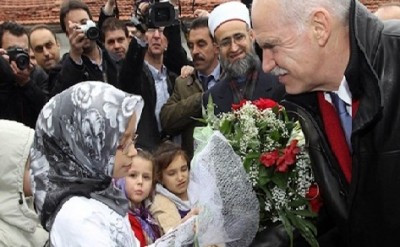 Being the first Greek premier to visit a Muslim village, Prime Minister George Papandreou has vowed last Friday 10 June to address problems facing the Muslim minority in Greece.” Our government is exerting efforts to make sure that the Muslim minority is subjected to no discrimination and to eliminate the mindset of the past in Western Thrace,” Papandreou said, according to the Anadolu news agency.

Speaking during his historical visit to Dimaryo village near the Greek-Bulgarian borders, Papandreou said his government would spare no efforts to solve problems facing Muslims in the region. “We are determined to solve the problems of the Muslim minority,” he said. “Greek citizens of different religions and origins live in harmony and they share a common vision for the future in Thrace.”

Muslims constitute about one third of the Western Thrace population of 370,000 while the majority are Orthodox Greek Christians. Most of the Muslims in the region are of Turkish origin. The primer said the government was working to solve the issues regarding minority foundations and the office of mufti as well as to introduce driving license tests in Turkish, the main language of the village.

He also promised that local Citizen Service Centres will be staffed with more Turkish-speaking personnel, a main demand of the villagers. Papandreou stressed that the government adheres to the principle of equality before the law. “Red tape is the oppressor of Christians and Muslims alike,” he said. The Greek premier stressed that the government is struggling against discrimination and “old perceptions” as regards the minority.

Muslims make about 1.3 per cent of the population in overwhelmingly Orthodox Christian Greece, according to the CIA facts book. The capital Athens is home to an estimated 100,000 Muslim Albanians, Egyptians, Pakistanis, Bangladeshis, Moroccans, Syrians and Nigerians.

Anti-Muslim tide has been on the rise in debt-hit Greece, which is battling a growing recession that has brought thousands of job layoffs, in recent months. In December, Muslims holding an open-air prayer near the city centre in Athens to celebrate `Eid Al-Adha, were harassed by local residents who threw eggs at them and blared loud music from windows

The education provided by the minority schools was amongst the top issues raised by local residents. The prime minister announced that no later than September, the special pedagogical academy (EPATh) for the Muslim minority school teachers will be included at Thessaloniki Aristotle University’s (AUTH) faculties.

Papandreou also announced that oral exams for a driver’s license will be available in the Turkish language as well, while local Citizen Service Centres (KEP) will be staffed with additional Turkish-speaking personnel. Responding to requests by young people, the premier said the region’s internet access will also improve rapidly.

Regarding religious charitable foundations, so-called vakufs, a firm solution will be found with their boards. In reference to the all-important tobacco crops, he pointed out that they will have to be preserved and boosted, and considering that it is a monoculture of Basma-type tobacco.

The presence of Islam in Greece is not a new phenomenon. Historically speaking it is largely connected to the Ottoman Empire and the social and political developments that followed the creation of modern day Turkey. As is the case in other Southeastern and Balkan countries Greece has an indigenous Muslim community. In recent years the country has also received a great number of immigrants, many of them coming from predominantly Muslim Southeast Asian and North African countries. However, because of the country’s Ottoman past, Islam in Greece is often associated with the Turkish/Ottoman ‘other’.

What is known as the ‘Muslim minority’ of Greece is a small but politically important community of about 120,000 Muslims inhabiting the region of Western Thrace in Northeastern Greece. As is the case with national minorities across Europe, this small Muslim community was formed by the movement of geographical boundaries rather than through migration. The Greek Thracian Muslims were exempt from the compulsory population exchange between Greece and Turkey which was agreed with the Treaty of Lausanne signed between the two countries in 1923. The Treaty also determined their status and rights and recognised them as a religious (Muslim) minority. However, the minority consists of three different ethnic groups, Turks, Pomaks and Roma, who may share the same religion but have internal linguistic and cultural differences. The formation of their diverse identities in opposition to the dominant Greek Orthodox narrative has not been without tensions and conflicts, especially for the Turkish community, part of which (especially the educated elite) identifies with the secularism of (Kemalist) Turkish politics. Muslim (and especially Turkish) identification represents for the Greek majority the non-European “Other” against which the “Europeanised” national identity has been “officially” defined.

With rising immigration, anti-immigrant sentiments have been increasing in Greece. A survey commissioned by the EU in 2003 found 83% had either very negative or quite negative attitudes towards immigrants, the highest of all the researched countries. The predominance of the Greek Orthodox Church also makes many Greeks consider non-Orthodox individuals as fundamentally non-Greek. These attitudes are sometimes reflected in the rhetoric of Orthodox clergy, and official handling of this problem has been remiss due to the continuing power of the Greek Orthodox Church.