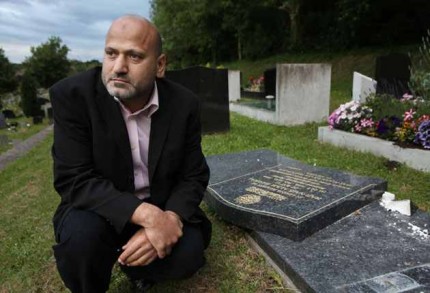 Amid growing attacks on their worship places and religious leaders, British Muslims are calling for more robust efforts to fight rising hate crimes against their minority.

“Islamophobic attacks, on persons and properties, are committed by a tiny minority, but the number of incidents is increasing,” Farooq Murad, secretary-general of the Muslim Council of Britain (MCB) will say in a speech to the umbrella body’s Annual General Meeting in Birmingham cited by The Independent on Sunday, June 12.

“Robust action is necessary and this means we must have a systematic manner of recording, monitoring and analysing such attacks.

Police data shows that 1,200 anti-Muslim attacks were reported in Britain in 2010.

The attacks included assaults on imams and mosque staff, including petrol bombings and bricks thrown through windows, pigs’ heads being fixed prominently to entrances and minarets, vandalism and abusive messages.

“It is not a piece of cloth on someone’s head or face, the shape of someone’s dress, a harmless concrete pillar on a religious building or even not speaking a common language that creates alienation,” the MCB leader will say.

Last April, a Muslim cemetery was desecrated in High Wycombe.

“This is not the first time that there has been desecration. This time it was much more severe, with more than 25 graves attacked,” said Mohammed Khaliel, 48, whose mother is buried at the cemetery.

“I’ve got photographic evidence of someone hammering them. It was a proper effort to deliberately do it.

“It was pure hatred. You have a graveyard that is 200 years old that has a small section for Muslims, and only that section was attacked. It was clearly Islamophobia.”

“Anti-Muslim bigotry is very real. It does exist,” said Ghaffar Hussain of the counter-extremism think-tank Quilliam.

He said that nearly 40 to 60 per cent of mosques, Islamic centres and Muslim organisations have suffered attacks since 9/11.

“There are sections of our society who are deeply suspicious of Muslims, even of Muslims building mosques, and are threatened by the idea of Islamification across Europe.”

Analysts blame a lack of political will over failure to properly report on anti-Muslim attacks.

“When I was working in the police, some of the notable spikes in incidents came after terrorist events such as 9/11 and 7/7,” said Dr Robert Lambert, co-director of the European Muslim Research Centre and research fellow at the Institute of Arab and Islamic Studies, Exeter University.

“We have more than 50 incidences of fire-bomb attacks and we have yet to reach the 10-year anniversary. But no leading politician has seen fit to stand shoulder to shoulder with mosque leaders. That is quite something,” added Lambert, a former counter-terrorism police officer.

“Xenophobic attacks on Muslims have increased under successive governments,” he said.

“In a manipulative alliance with some sections of the media, they have demonized Islam as part of their foreign policy propaganda.”

British Muslims, estimated at nearly two million, have been in the eye of storm since the 7/7 attacks.

A poll of the Evening Standard found that a sizable section of London residents harbour negative opinions about Muslims.