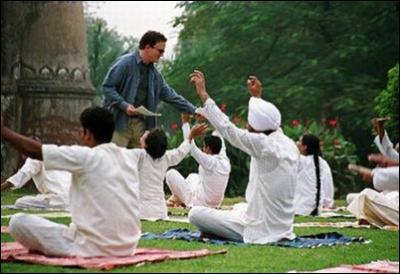 So a Jew, a Christian and a Muslim walk into a bar. The bartender turns around and says, “What is this … a joke?”

Yes, it is a joke but some people would wonder what a Muslim is doing in a bar and how he could possibly be involved in a joke. Because as far as many Americans are concerned, the words “Muslim” and “humour” don’t belong in the same sentence.

Which is where Ahmed Ahmed’s “Just Like Us,” which opened Friday in limited release, comes in. Ahmed is a stand-up comic in the U.S. and, yes, he is an Egyptian-born Muslim. On a recent swing through the Middle East with a clutch of fellow comics, some of whom are also Arabs, he took along a camera crew to document to fact that Muslims can tell damn good jokes about themselves and that other Muslims will laugh uproariously.

The movie is fast, funny and light on its feet, dipping less into politics or religion than into cultural quirks and characteristics. For instance: An Arab invented the original mechanical clock, which is odd since Arabs are never on time. Bu-dah-bum. You get the idea.

One might complain that Ahmed and his Comedy Arabic Tour hit the most liberal ports-of-call in the Middle East — Dubai, that international centre of business and trade in the United Arabs Emirates; Beirut, Lebanon, the “Paris of the East”; and Egypt, the “Hollywood of the Arab world.”

Ah, but the comics also gave an underground concert in Riyadh, Saudi Arabia, where no public entertainment is allowed, religious police are everywhere and they can’t even enter the country as entertainers but as “consultants.” How in the world did they get away with it? That may have been another documentary in itself!

Ahmed, one of the stars of Vince Vaughn’s Wild West Comedy Show and The Axis of Evil Comedy Tour, isn’t interested in the larger picture. He settles for brief forays into each city and a hit-and-run encounter with his relatives in Egypt. Expect no broader context but simply an assertion that once you get everyone laughing, an Arab is “just like us.” As an examination of complex cultural ties and conflicts, that’s pretty glib but in this instance glib is also funny.

Ahmed takes along a group of comedians that include Omid Dajalili (star of The Infidel), “In Living Colour” alum Tommy Davidson, “The Wedding Ref” host Tom Papa and Ahmed’s Wild West Comedy Show co-star Sebastian Maniscalco. And while he did direct, Ahmed is generous in showing his fellow comics during their times on stage.

Some of the laughs here come in watching — and hearing — the North American comics test jokes on an entirely different audience without being fully aware of the censorship laws. Ahmed admits he was banned for a year in Dubai for saying something that rubbed the authorities the wrong way. A woman comic uses the word “balls,” then abruptly wonders if now she’ll be banned. The audience seemed to laugh at this but that may be how Ahmed edited the film. Who knows what they’re laughing at?

For that matter, editing is so fast and the pace of the tour so swift that you wonder what did get left out. How did that underground concert in Riyadh happen? Why is there a brief altercation backstage at one event? How did authorities react to the gags? And doesn’t the fact that most of the routines are in English exclude most of the Arab populations in these countries?

Mostly, Ahmed wants to show men, women and children of the Middle East smiling and cracking up in laughter to counter the image of the serious, sullen or even furious Arab who inhabits the American consciousness. He and his comics tell jokes well enough that he gets ample opportunities for this.