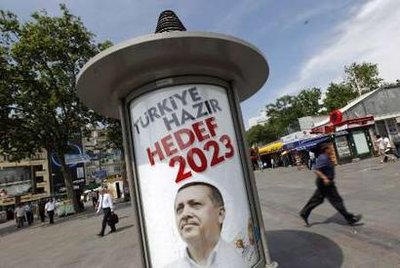 With the slogan “Target 2023,” the Turkish prime minister’s Justice and Development Party (AKP) is poised to win a third straight term in power in parliamentary elections on Sunday thanks to enduring economic and political stability.

On Sunday, 50 million Turks are going to cast their ballots for the general elections in which fifteen political parties with 7,492 candidates and 203 independent candidates are running for the 550 seats of the parliament.

According to pollsters, the AKP is expected to cruise to victory with between 45 and 50% of the vote, enough to form its third one-party government since 2002.

Running this term under the slogan “Target 2023,” marking the 100th anniversary of the modern Turkish Republic, the AKP managed to cleverly steal the glamour of its opposition centre-left Republican People’s Party (CHP), which was established by the republic’s founding father Mustafa Kemal Ataturk.

Moreover, the AKP is running against a splintered opposition, which also includes the Nationalist Action Party (MHP), expected to exceed 10%, and Kurdish-backed independent candidates who are eyeing some 30 seats in the 550-seat parliament.

Setting an example of marrying Islam and democracy, Turkey managed to establish itself during the past years as a rising power with a vibrant, free economy and a US ally that aspires to join the European Union.

In power since 2002, the AKP was accused of hiding a secret Islamic agenda, a charge they fiercely deny as scaremongering.

“If we did have a hidden agenda this would be the best kept secret on earth because people have seen us in action for the past nine years,” Egemen Bagis, Turkey’s minister for European affairs, told Reuters on Saturday.

Under the AKP, hijab was seen as a regular scene in Turkish urban streets as surveys show more women wear headscarves.

Some say the call to prayer from mosques is louder under AK.

The government has also made alcoholic drinks more expensive while trying to introduce tougher laws on sale and consumption, particularly to discourage young drinkers.

Facing such changes, opposition CHP accuses Erdogan of intolerance and of leading a “wiretapping government” to keep political rivals in check.

Erdogan, a devout Muslim who does not drink or smoke, denies his party is imposing any lifestyle choices.

“I may have established a position in my own word, my own family, against alcohol. We are a conservative democratic party,” he said in a recent interview.

“Our personal position on some issues is clear but imposing our personal approach on the whole of society is repression.”

Yet, critics say that the contest between Islamists and secularists on Turkish votes is a never ending race.

“The elections in 2007 were an ideological contest between secularists and conservatives,” said Sinan Ulgen, from the Istanbul-based Centre for Economics and Foreign Policy Studies.

“There has been an evolution in Turkish society and in the opposition of what secularism means and that has allowed the debate to move forward, but it doesn’t mean the ideological schism is over,” Ulgen said.