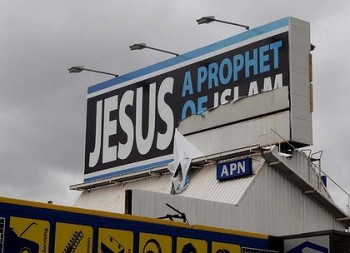 Vandals have interfered with another of the provocative billboards along Sydney roads offering information about Islam, but organisers say they will push on with their campaign to “build bridges”.

Islamic group MyPeace paid for three billboards with varying messages, including “Jesus: A Prophet of Islam”, to be posted along busy roads in Rozelle, Darlinghurst and Rosehill.

MyPeace founder, Diaa Mohamed, said he hoped to replace the billboard on Victoria Road, Rozelle, which was torn soon after it was put up late last month.

Since then, vandals have damaged a light box next to the billboard on James Ruse Drive, Rosehill, so the sign cannot be illuminated at night, Mr Mohamed said.

The series of billboards display a telephone number to get more information about Islam or a free copy of the Koran and other literature.

Mr Mohamed said that, while most feedback has been positive, some of the calls MyPeace received were very angry, with members of the public calling to say the vandalism would continue and organisers should “go back to your own country”.

“It’s not even ‘we don’t agree with what you’re doing’. It’s more hateful than anything.”

The campaign attracted criticism from a Sydney Catholic Bishop, Julian Porteous, who said it was provocative and offensive.

The Anglican Bishop of South Sydney, Rob Forsyth, said calling Jesus a prophet of Islam was “complete nonsense”, but he would defend the group’s right to say it.

Mr Mohamed said he had received plenty of supportive calls from priests from varying denominations.

MyPeace will continue its campaign with more billboards going up next month and plans for television and radio advertising, he said.

“The hate that some people have towards Islam and Muslims, it’s dangerous almost, that that even exists.

“So we’ll keep going and address it.

“We’ve been accused of trying to convert people to Islam and all that sort of stuff. If this was a campaign to do that, I would say it openly.

“This particular campaign was just to build bridges and extend a hand.”