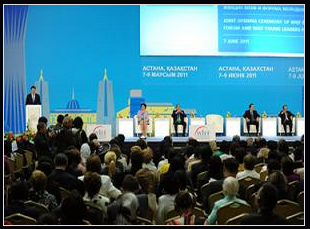 Delegates from Muslim countries are meeting in Kazakhstan to mull ways of boosting inter-Muslim cooperation, with calls for the creation of an “Islamic G10” to improve investment opportunities.

“With the aim of creating a new direction for economic cooperation, we propose the creation of a platform for dialogue among the group of 10 leading economies of the Muslim community,” Kazakh President Nursultan Nazarbaye told the World Islamic Economic Forum (WIEF) on Wednesday, June 8, Reuters reported.

He said more cooperation was needed in the field of scientific and technological innovation.

The forum aims to enforce more Muslim economic empowerment and boost inter-Muslim cooperation as well as cooperation with non-Muslim countries.

The event, which brings together more than 150 delegates from different Muslim countries, also discusses a number of issues such as Islamic banking, development of financial infrastructure, halal industry, development of small and medium business and alternative resources of energy.

Named “Islamic Davos”, the forum is held for the first time in Central Asia. WIFE held its first session in Malaysia in 2005.

Nazarbayev also called for the creation of a food reserve among Muslim countries to guard against shortages and improve food security in the Muslim world.

“In order to reinforce food security, I propose we work out a system of food aid within the framework of the Organization of the Islamic Conference.”

He proposed that Kazakhstan, the world’s largest flour exporter, should play host to a grouping of Muslim countries analogous to the United Nations’ Food and Agriculture Organization (FAO).

“I propose that we accommodate such an organization in Kazakhstan, as a country that is actively developing its food export potential.”

Rising bread prices, compounded by crop failures in Russia and other grain-growing countries, helped fuel the protests that toppled the leaders of Tunisia and Egypt this year and provoked further unrest across parts of the Arab world.

Kazakhstan, a former Soviet republic in Central Asia where 70 percent of the 16.4 million population is Muslim, this year holds the rotating chairmanship of the 57-nation OIC.

Kazakhstan is a net exporter of grain.

With annual domestic grain consumption in the region of 2.5 million tonnes, the vast steppe nation has averaged a crop of 17 million tonnes over the last five years.

It ranked the world’s seventh-largest wheat exporter in the last marketing year and plans next season to match or exceed the 6 million tonnes planned for export in the current season.

Though its 2010 crop also fell victim to the drought that prompted Russia to halt exports — a ban that is due to expire on July 1 — Kazakhstan managed to fill part of this shortfall, increasing exports to Azerbaijan and Turkey in particular.

Malaysian Prime Minister Najib Razak, addressing the forum, said food security was among a number of issues “of special interest and concern to the Muslim world.”