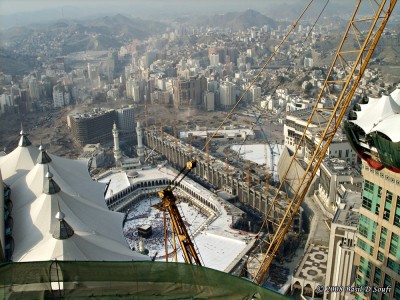 The Saudi holy city of Mecca is proving to be the exception to a Middle East property downturn, as more and more pilgrims flock to Islam’s holiest city and fuel a hotel construction boom.

The more than 2.5 million pilgrims who flock to Mecca for the annual Haj pilgrimage, a duty for every able-bodied Muslim who can afford it, are witnessing a transformation of the city’s skyline with luxury hotels, high-rise residential blocks and cranes now overlooking the Grand Mosque.

A forest of high-rise buildings just next to the Grand Mosque is emerging, built by Saudi developer Jabal Omar and costing more than $5.5 billion, where Hilton and others will open 26 new hotels and add 13,000 more rooms.

“But there’s no doubt that these rooms will also be fully occupied,” said Zaidi. “The simple growth of the Muslim population more than justifies the expansion.”

A total of more than 6 million pilgrims enter Saudi for Haj and Umrah pilgrimages each year.

The expected spending spree by the government and developers in Mecca and the second holy city of Medina is valued at some $120 billion over the next decade and at the present there are $20 billion of projects underway in Mecca alone, according to Banque Saudi Fransi.

That is expected to boost Mecca’s ability to accommodate pilgrims by at least 50 per cent over the next decade.

Bringing more Muslims to the holy city for salvation, according to the writs of Islam, is something Saudi Arabia sees as its duty and the kingdom has been behind the drive to develop and expand the city, despite grumblings by detractors.

“This is an absolute contradiction to the nature of Mecca and the sacredness of the House of God,” Sami Angawi, an expert on Mecca and Medina based in Jeddah.

“Both (Mecca and Medina) are historically almost finished. You cannot go around a central area, and you do not find anything except skyscrapers.”

The world’s largest clock tower, in the style of Big Ben, now towers over a high-rise hotel facing the Kaaba, the ancient Mecca shrine that Muslims around the world face when they pray.

Mecca has traditionally offered non-serviced accommodation for pilgrims, such as small rooms with basic facilities for washing and resting. They were seen as short-term, temporary residents, some even staying in private homes in Mecca for a small charge.

But all this has changed over the last few years with big, international and regional hospitality groups moving into Mecca. Branded luxury hotels with 24-hour service from a team of male staff is now commonplace for tourists and pilgrims. The rooms are utility-based, with bath tubs replaced with showers and facilities for ritual ablution.

Commercial space close to the Grand Mosque can sell for as much as $100,000 per square meter, property experts claim, making it one of the most expensive, if not most expensive, in the world.

By comparison, the most expensive street in the world, reputed to be an avenue in Monaco, is estimated at around $180,000 per square foot.

Dubai developers Emaar Properties and Damac Properties as well as construction firm’s Arabtec and Drake and Scull are also anxious to get into the Saudi market.

Those companies, along with rivals from Qatar, Kuwait and Egypt are betting that success in Mecca could give them an edge in penetrating the broader Saudi market, which is seeing a severe housing shortage due to the kingdom’s booming population.

Banque Saudi Fransi estimates private and public developers need to build about 275,000 homes per year though 2015 to meet the country’s demands for about 1.65 million new homes.

“Our biggest backlog of about 50 per cent, which comes to 7.5 billion dirhams ($2 billion), is in Saudi Arabia,” said Zeina Tabari, chief corporate affairs officer at Drake. “We are tendering for a lot of projects in Jabal Omar and around the Mecca area. We expect a tremendous upside in Saudi Arabia.”

Later this month, the Saudi government is hosting a gathering of officials, developers and builders at a ‘Future Makkah’ summit on the city’s breakneck expansion.