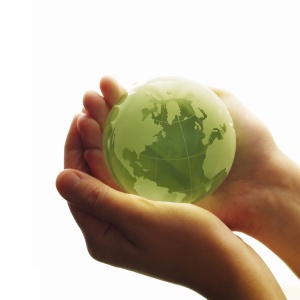 The green revolution has arrived. Well, almost. While we watch as Europe gets its act together and North America and South America continue to reach toward environmentalism succinct with everyday life, in the Islamic world, only pockets of forward thinking has appeared. The Islamic world needs a green revolution that will see the religion and the environment coexist as it once did.

We have seen religious leaders band together in the fight against occupation, Western imperialism and attempts to educate the West on what Islam means and who are the people who account for nearly one-fifth of the world’s planet. But little has been done to create and sustain green living and environmentalism from Morocco to Indonesia. That can all change and it should.

Islam is a faith of unity and togetherness, despite how fractured it may appear today. The members of the Ummah believe in the mission of the Prophet Mohamed, whose message from God has inspired more love and peace than the hatred of recent years. It was he who first talked of living in one with the environment and the surroundings that the Divine had given Earth and its living creatures, humans included.

“Whenever a Muslim plants or grows a sapling or a plant, and a human being, a beast, or anything else feeds upon it, it is counted for him as an act of benevolence,” the Prophet was reported to have said. (Al-Bukhari)

Today, however, looking around the Middle East and much of the Islamic world, there are little places available for planting, or protecting the unstable environment being destroyed by human activity. On Egypt’s Red Sea coast this is seen in the daily dumping of trash by resorts, the lack of a sense of public space by individuals who too often view the beaches as one large trash bin and the routine oil spills that are a result of under-regulation of offshore oil drilling.

Cairo, a city I have lived in going on 8 plus years, has pollution levels, according to the ministry of environment, 100 times that of New York City – a place not known for its cleanliness. This tells us something. The Prophet’s calls for sustainable living and ecology have found its way too quickly into the dustbin, forgotten it seems save a few stalwart individuals who have made an effort to protect our natural surroundings when so many have failed.

One of those people is Omnia Amr, a young Sudanese national who upon graduating from the American University in Cairo, developed Eco Options Egypt, a content provider and environmental consultancy and planner. It has been an uphill battle, but the ideas she has attempted to push onto everyday Egyptian and Middle Eastern society are vital to the future of the Islamic world.

“We are doing the best we can with what our resources allow,” she told me during our initial conversation on the website’s content. “It is an important idea that I truly and honestly believe can help educate and create a better environment all around us.”

She might be overly optimistic when dealing with the Middle East and its efforts to go green, but without individuals like Amr, the reality of the destruction of the natural world before our eyes will not dissipate.

That’s Egypt. For the rest of the Islamic world no other annual event brings unity and people together like the Hajj, or pilgrimage to Mecca and Medina in Saudi Arabia. Here, we are witnessing the beginnings of what could transform the Islamic world for the better.

Last year, Muslim environmental activists and Islamic governments are looking at possible solutions to turn the Muslim pilgrimage to Mecca and Medina green. Environmentalists at a Jakarta meeting of the International Islamic Green Movement called on governments to implement new strategies to make the holy pilgrimage more environmentally sustainable.

The plan proposed at the conference includes a ban on plastic bottles at pilgrimage sites and holding workshops that deal with the link between environmentalism and the teachings of Islam.

Mohamed Sembiring, a member of the Indonesian environmental organization Kehati told me after the conference that the initiative is expected to include “many new approaches to the Hajj. Among these are eco-friendly mosques, meaning they will be charged and run with sustainable materials.

“We also hope that the Saudi government will be able to print Qur’ans on paper that will be part of new forestry programs that recycle material, making it more biodegradable and won’t affect the life of forests and trees.”

It is a perfect start to educating religious leaders throughout the Islamic world on the importance of being green.

Mahmoud Akef of the Earth Mates Dialogue Centre agreed vehemently that making the Hajj green is the first step along the path toward sustainable religion.

Akef argued that Muslim environmentalists believe they can have the message of climate change and global warming heard in the region and Islamic countries through the mosque.

He continued to say it would be an excellent “educational” tool that would reach a wide audience at a grassroots level.

“If even one speech at the Hajj was to talk about our impact on the environment, this would be an immediate first step,” he added.

Now the battle begins at home, educating young children in Pakistan, Egypt, Morocco and elsewhere on the Prophet’s discussion of unity, not just within the community of Believers, but with the beautiful natural world that must be preserved.