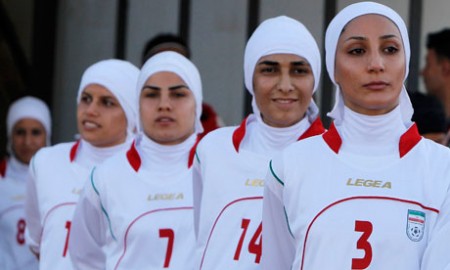 Iran’s dream of competing in the London 2012 Olympic women’s football tournament have been crushed by an unexpected ruling that their Islamic dress broke Fifa rules, said a football federation official in Tehran.

Iran is complaining to the world ruling body after its women were banned from playing, moments before an Olympic qualifier against Jordan last week, due to their full-body strip that includes a head scarf.

The head of women’s affairs at Iran’s football federation said the country had made changes to its women’s kit after a Fifa ban last year and believed it had been given the approval of the world federation and of its president, Sepp Blatter.

“We made the required corrections and played a match afterwards,” Farideh Shojaei said. “We played the next round and were not prevented from doing so, and they didn’t find anything wrong. That meant that there are no obstacles in our path, and that we could participate in the Olympics.”

Fifa’s rules for the 2012 Olympics state that: “Players and officials shall not display political, religious, commercial or personal messages or slogans in any language or form on their playing or team kits.”

In order to comply with the Islamic dress code which is mandatory in the Islamic Republic, Iran’s women footballers play in full tracksuits and head coverings that conceal their hair.

“[The Iran football federation chief Ali] Kafashian took it to Fifa and showed it to Sepp Blatter. And they proved that this conduct conforms to the fourth article of the Fifa constitution, which says [a kit should be] devoid of politics or religion,” Shojaei said. “In reality, this kit is neither religious, nor political, nor will it lead to harm a player. They proved this, and Sepp Blatter accepted this and we participated in the Olympics.”

Whatever the result of Iran’s complaint, it is unlikely that the team, who were awarded a 3-0 defeat in the unplayed qualifier in Amman, will now qualify for 2012, Shojaei said.

“It is extremely difficult to predict what results will come out of this, but I think it unlikely because the preliminary games will not be repeated.

“The countries that invested, and spent money and time and took part in the second round will clearly not be willing to repeat these games, especially if this week it becomes clear which team will enter the final round. So it is extremely unlikely.”

However Fifa says it had warned the side about dress codes: “Fifa’s decision in March 2010 which permitted that players be allowed to wear a cap that covers their head to the hairline, but does not extend below the ears to cover the neck, was still applicable.

“Despite initial assurances that the Iranian delegation understood this, the players came out wearing the hijab, and the head and neck totally covered, which was an infringement of the Laws of the Game. The match commissioner and match referee therefore decided to apply correctly the Laws of the Game, which ended in the match being abandoned.”