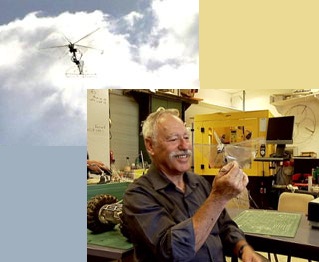 Only in Israel could someone take a beautiful natural specimen, the butterfly, and turn it into a lethal agent on behalf of the State. Renowned Israeli weapons designer, Dubi Benyamini has designed a mechanical butterfly that can be used to infiltrate a target like a home, car or any outside location in order to kill a victim targeted for assassination by Israeli intelligence or the IDF. Of course, the drone can also photograph and video any subject it “sees” and can be used for “close-in” surveillance of subjects.  It can be powered by solar energy absorbed in its wings in the course of flight.

“Look, a swallowtail!” A 70-year old moustachioed man hops jubilantly between rocks and prickly flowers, chasing a butterfly. “And look here!” What looks like a dragonfly hovers around in a mechanical whirr of transparent wings.

The eccentric scientist loves this apparently living thing so ferociously that, six years ago, he decided to compete with Mother Nature. Combining his passion and work, he’s created the perfect robotised replica of a minuscule butterfly. The mechanical X-insect that hums over our heads grew out of his love for nature’s graceful and enchanting creature.

“Love’s like a butterfly,” says the unknown poet. “It goes where it pleases and it pleases wherever it goes.” Love, like butterflies, has so many forms and metamorphoses. Binyamini’s love for the angelic creature is a strange love. Could the fluttering of a butterfly’s wings affect the way Israel equips to war and kills its enemies?

Meanwhile, unperturbed by the futurist reproduction, the original butterflies flit and flutter about in the spring sunshine, hailing from nowhere, their wings sailing on the wind in full colours, illuminating, neither quite birds nor flowers, flying flowers maybe.

“I don’t know whether I was then a man dreaming I was a butterfly, or whether I’m now a butterfly dreaming I’m a man,” wrote Zhuangzi, the legendary Chinese philosopher. “Between a man and a butterfly there must be some distinction. It’s called the Transformation of Things.”

Binyamini’s own ‘transformation of things’, the ‘X-wing’, is a hybrid between a mechanical dragonfly and a remote-control butterfly crossed with an Unmanned Aerial Vehicle (UAV). And, since dragonflies don’t eat butterflies, for Binyamini, that’s a most valuable predator.

With its two pairs of strong, translucent wings and large multi-faceted eyes, the dragonfly is the world’s fastest insect. “We’re trying to imitate its flight. The front wings go up while the back wings go down,” explains Binyamini, his arms demonstrating the balancing act of a walker on an invisible tightrope.

“The X-wing is chiefly conceived to be used indoors, at airport terminals and train stations,” he adds. “At first, it’ll shoot video and transmit it in real time. Later on, it’ll hunt down potential terrorists on the run.”

Could the X-wing quite sinisterly carry out extra-judicial targeted assassinations, much in the way of attack helicopters or drones? “Whatever is requested, I’ll do!” answers Binyamini with a broad, suggestive smile.

Binyamini knows all about butterflies – where they drift and wander, and how they mate. “Usually for a mere half-hour,” he says. “See, here, a couple of Danaus. These are seriously sexually-disturbed butterflies. Their mating ritual can last up to 48 hours, a world record. Look what goes on, three butterflies on top of each other, what a party. There, an octet flying in formation, how beautiful.” The analogy with dogfights of combat jets is disturbingly noticeable.

For in the case of butterflies, making love means ‘make war for love’: “‘Cherchez la femme’, giggles Binyamini in French. “When a male ascends to the hilltop, he turns it into his territory. He lies there in wait for the prospective females. But other males are eager to mate. So a fight erupts – one moves around and repels the other in a spiralled dogfight. But it’s a duel between gentlemen: whoever reaches the zenith wins the female’s heart.”

Binyamini’s love for butterflies isn’t only a passion, but pure patriotism. For butterfly, read ‘Israel’: “Butterflies are so beautiful, fragile, and vulnerable! How they manage to survive! They’re prey to all. Yet, against all odds, despite the threats, they remain strong.”

So, how does the butterfly killer work? The innocuous ancestor is never far off: “A butterfly sucks and sips two drops of flower nectar, and then flies for a whole hour. What a great machine!” Binyamini answers. “We thought of energy harvesting, milking energy from nature, from the flower’s sweet juicy secretion. Add solar cells on the wings and I’ll keep flying.”

For over 40 years, Binyamini has been considered one of Israel’s smartest military brains. Laureate of Israel’s most prestigious prize, he’s run billion dollar development projects, has managed a hundred- man taskforces. His workers are the crème de la crème of Israel’s aeronautics.

“We’re the nutty professor’s men,” concedes one of Binyamini’s wizards in the ‘X-wing’ lab. “We’re called ‘Duby’s buddies’. Duby comes up with the most improbable demand, this big,” the engineer confides, deploying his arms in disarray. “I ask him, ‘What do you want me to do?’ Duby retorts, ‘Precisely. Just like a flower’.”

To assuage his insatiable passion, Binyamini twirled around the four corners of the world, discovered 15 new specimens. Showing his private collection of butterflies, he points at “‘Talia’, my elder daughter; and ‘Sigal’, my youngest. And here is ‘Leah’, a very, very unique species indeed!”

Back in the blossoming desert, Binyamini chases the gentle creature, claps his net unsuccessfully. “Too fast for me, I’m a little rusty,” he murmurs to himself, out of breath.

The round dance of love has turned into a deadly dance. Love of the loveliest creature has mutated into fatal attraction for a delicate predator. Why would a butterfly freak turn the species he loves so much into a killing machine is left hovering like the elusive flying flower.

Suddenly, a dry clap punctuated by a triumphant proclamation, “Got you!”, and Binyamini proceeds to extricate the dust of colours from the net, then, mercifully, lets the pulsating heart fly away. One thing’s for sure, the X-wing is designed not to let its prey get away.