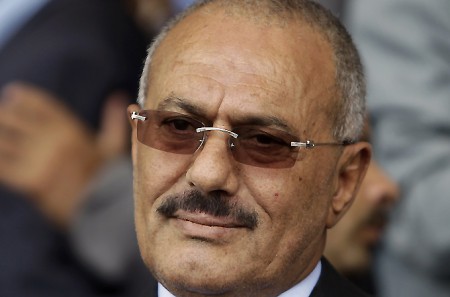 Protesters celebrate what they say is fall of president after he travels to Riyadh for medical treatment for injuries.

Pro-democracy protesters are celebrating what they described as the fall of the Yemeni government after President Ali Abdullah Saleh left the country for medical treatment in Saudi Arabia.

“Today, Yemen is newborn,” sang dozens of youths in Sanaa’s University Square on Sunday, dubbed “Change Square”, which has been the epicentre of anti-government protests that have raged since February.

“This is it, the regime has fallen,” others chanted.

But Saudi officials said Saleh is in the capital, Riyadh, for treatment only and that the visit is not a political one.

Saleh left for Riyadh on Saturday, after he was injured in an attack on his compound a day earlier, the Saudi royal court said in a statement on Sunday.

The embattled leader flew to Riyadh on a Saudi medical aircraft and was immediately taken to the capital’s military hospital, while a second plane carried members of his family, the statement said.

However, his departure has raised speculations over whether he is ever going to return to Yemen.

“If he was seriously injured then he would need long treatment in Saudi Arabia and Yemen cannot stand a protracted power vacuum,” he said.

“If he was just suffering minor injuries then I would assume it would have made sense for him to be treated in Yemen. The fact that he was flown to Saudi Arabia says a lot about the end of the Saleh era.”

Meanwhile, sources told Al Jazeera that vice-president Abd-Rabbu Mansour Hadi had taken over as acting president and supreme commander of the armed forces, which was later confirmed by Washington.

However, our correspondent said the vice-president is more of a “window dressing” until a transitional council can be formed. 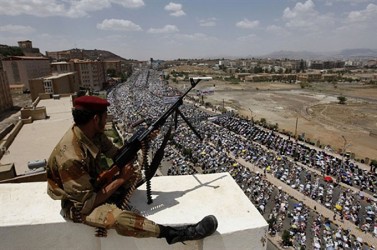 “The opposition and the tribal establishment will say they are now the ones to dictate a new deal. You have the power tribal leaders, the disenchanted generals who joined the pro-democracy movement and the Islamists who are the most organised and largest opposition party that will definitely sit down and draft a new law about the transition and who should oversee it.

“Saudi Arabia has leverage, cash, border, and historical political influence. They will talk to tribal leaders, give them money, and instruct them what to do and what the exit strategy is,” our correspondent said.

Friday’s rocket attack on Saleh’s presidential palace in the capital Sanaa marked a major escalation in the four-month-long uprising against his 33-year rule.

Amid the celebrations, heavy gunfire and explosions were reported in the capital on Sunday, witnesses said, just a day after a Saudi-brokered truce.

The gunfire was centred on the Hasaba district, a focal point of fighting in recent weeks between Saleh’s forces and members of the powerful Hashed tribe led by Sadeq al-Ahmar.

Yemen’s crisis had transformed in recent weeks from a peaceful uprising to a struggle between two of Yemen’s most powerful families – Saleh’s, which dominates the security forces, and the al-Ahmar clan, which leads Yemen’s strongest tribal confederation.

The confederation groups around 10 northern tribes.

Al-Ahmar announced the Hashed’s support for the protest movement in March, and his fighters adhered to the movement’s non-violence policy. But last week, Saleh’s forces moved against al-Ahmar’s fortress-like residence in Sanaa, and the tribe’s fighters rose up in response.

After news spread that Saleh had left the country, an activist and a witness said military forces in the southern port city of Aden had withdrawn from checkpoints.

Elsewhere in the south, armed gunmen stormed buildings in Taiz, prompting protesters to form committees to try to keep the peace.