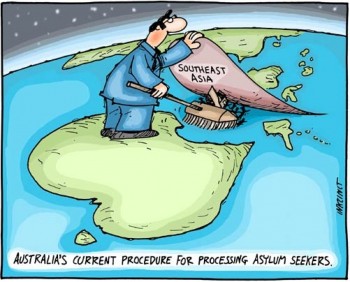 Are we losing touch with the humanitarian issues facing asylum seekers?

Could there be a more divisive debate in Australian households, workplaces, or Federal Parliament for that matter, than that of asylum seekers?

I doubt there has been a day where Immigration Minister Christopher Bowen (MP) has wished it didn’t exist as an issue altogether. But the reality of our times is that the fervour surrounding “Illegal immigrants”, “boat people”, “queue jumpers”, “asylum seekers”, and “refugees”, has created one of the most heated topics of discussion in Australia.

Sadly, the terms I’ve used to describe the humans who are at the core of this issue, are frequently misunderstood and regularly kicked around the paddock to score political points.

The discussions between, neighbours, friends, family, and work colleagues has taken a sharp turn over the last few months. Media coverage of people in detention centres venting their anger and frustrations has left many Australians annoyed and disappointed with the Federal Government for being “too soft” on these people.

The turn in discussions has left many people wondering “why we’re putting up with these people?”, “why don’t they just be thankful we feed them?”, or “we should send them all back!”  I’ve heard comments similar to the ones mentioned, and most have come from family and friends, as well as work colleagues, and while their comments may come across as being unsympathetic, most people haven’t had the opportunity to speak to asylum seekers, and even fewer people know their stories.

In April last year, as I was in the effervescent cycle of deciding what to do next in life, I put my hand up and volunteered in Christmas Island for four weeks. I departed for Christmas Island unsure of my true opinions on the matter of asylum seekers, and I returned with a fairly similar feeling of ambiguity surrounding their plight. During my stay I spent most of my time organising logistics, teams of volunteers, and performing a variety of programs for the people inside the detention centre. From the muscle tearing acts of Yoga, to the heated games of cricket and soccer, which everyone took a little too seriously, I became part of the discussion, part of the political football.

A year has passed and the awkward bridal waltz of Federal politics has been unable to break the dance routine. Unexpectedly I find myself in an uncomfortable position, as I check-in to Villawood detention centre, to visit some of the asylum seekers I met at Christmas Island and who are still in detention, I still can’t comprehend the matter.

I’ve often struggled to understand my visits, and the discomfort sets in when my friends begin to ask “why they’re still in detention?” and “what they should do?” Both questions have yet to be answered, but as the general discussion amongst Australians descends into the sphere of ignorance and intolerance, I’ve accepted that the effervescent cycle of life necessitates I hit the dance floor or at least make sure the football doesn’t get lost in the crowd.

One man I’ve come to regularly visit is Bassem. Bassem is of Burmese heritage he has lived in Malaysia as a registered refugee for over seventeen years with his wife and growing family of four children. With little in terms of access to education, employment, health services, and the dignity of equality, Bassem made the decision to seek asylum. Having chased the paper trail of applying for relocations, he decided upon the journey the Department of Immigration would call “irregular maritime arrivals”, and made the fateful journey to Christmas Island aboard a boat.

Apart from the dangers surrounding the voyage to seek asylum Bassem has been in detention for nearly 18 months, and has almost lost the kick to put up with his life.

The effervescence has long gone and his broad welcoming smile is replaced by a quivering lip. As I hug the once average sized man, my arms quickly collapse his jacket and I’m left cradling his dwindling body mass. Admittedly some of my friends in the Villawood Detention Centre have faced physical health issues, but Bassem seems to be suffering in a very different way.

He recounts his pain, he shares his frustration, he explains his anguish, and he tells his story. His wife who is still in Malaysia looking after their four children has recently faced difficulties in keeping the family off the streets, she’s been faced with unwanted sexual attention and assault, and she’s also had to place a child in an orphanage just to ensure there is enough food for the family to eat. Bassem is pained by the plight and difficulties his wife faces, he’s a man of faith, and still asks for my prayers, but he is slowly losing his ability to control his emotions, and with that he gets another kick.

His wife has also reached the limits of her time on the field, and shared the idea of bringing it all to an end. I don’t quite understand how someone could possibly feel such pain, and it’s even harder to comprehend the situation Bassem and his family are in, it almost seems unfair to expect someone to comprehend their situation. But when Bassem reveals the weight of his pain, he braces himself, and struggles to contain his emotions. He shares the horror, and i hear how his wife and children are planning to bring their quandary to a sudden end by poisoning themselves, it is enough to bring Bassem to the brink of his faith.

Bassem isn’t an illegal immigrant, because we know that anyone who is seeking asylum has a legal right to enter Australia (UN Refugee Convention – to which Australia is a signatory).

Bassem is just one of us, he’s a human.

The names used in this piece have been altered to protect the dignity and privacy of certain individuals.

Abdulah Zayied does not represent or work for any humanitarian or refugee advocacy associations.