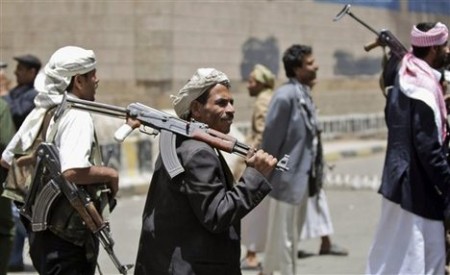 At least 41 people have been killed overnight in ongoing street fighting between government forces and opposition tribal fighters in Yemen’s capital.

Medical workers said that fighters from both sides were among the dead.

Al-Qadhi said there was “heavy gunfire and blasts at the heart of [Sanaa] targeting the tribal fighters of [Hashed tribal leader Sadiq] al-Ahmar in the Hasaba district”.

“We could see also last night flames coming from one of the government buildings which we believe was hit by a mortar shell after being controlled by al-Ahmar fighters.”

More than 350 people have been killed in Yemen since nationwide protests calling for Ali Abdullah Saleh, the president, to end his 33-year rule started about four months ago, inspired by the popular uprisings that ended the reign of the long-standing rulers of Tunisia and Egypt.

“The tribal leader’s supporters are concerned more with the places used to launch attacks on al-Ahmar and his supporters. So I think they are expanding their control over several government buildings,” al-Qadhi said.

A tenuous truce, declared a few days ago to end street fighting between the two groups, broke down on Tuesday with a government official saying “the ceasefire agreement has ended”.

They said that security forces were attempting to prevent anyone from gathering in the city, firing on those who tried to do so.

Medics confirmed that at least two people had been killed.

According to reports received by the UN, more than 50 protesters have been killed in Taiz since Sunday.

“The UN human rights office has received reports, which remain to be fully verified, that more than 50 people have been killed since Sunday in Taiz by Yemeni Army, Republican Guards and other government-affiliated elements,” Navi Pillay, the UN human rights chief, said on Monday.

The violence in Sanaa and Taiz follows the killing of at least 30 people in air raids in the southern city of Zinjibar, which is now said to be controlled by fighters linked to al-Qaeda.

Monday’s air attack appeared to be in response to the takeover of the city by 300 alleged al-Qaeda fighters and an overnight ambush that killed at least six Yemeni soldiers and injured dozens more who were travelling to the southern city.

“Civilians found a military car and an armoured vehicle. They were destroyed, and the bodies of six soldiers were found on the roadside,” Ayman Mohamed Nasser, editor-in-chief of Attariq, Aden’s main opposition paper, told the Reuters news agency by telephone.

Opposition leaders have accused Saleh of deliberately allowing Zinjibar, near a sea lane where about three million barrels of oil pass daily, to fall to al-Qaeda in a bid to show how chaotic Yemen would be without him.

The deal was aimed at stemming the growing chaos in Yemen, home to al-Qaeda fighters and neighbour to the world’s biggest oil exporter, Saudi Arabia.