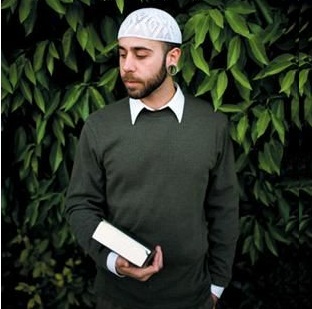 When US soldier Terry Brooks was sent to join military guards at the infamous Guantanamo prison that houses Muslim militants from Taliban and Al-Qaeda, he had not thought he would embrace the religion of those prisoners. After a few chats with a Moroccan inmate, he converted to Islam in 2003.

Brooks was caught by local reporters this week praying in the western Saudi town of Madina before heading for nearby Makkah to perform his first pilgrimage (Umra), which he said had been his dream over the past years.

The Saudi Arabic language daily Okaz said it waited for Brooks to finish his prayers and talked to him about his conversion to Islam. He credited “prisoner number 590” named Ahmed Al Rashdi of Morocco for his “landmark” decision. After converting, he was expelled from the army.

Brooks told the paper he was sent to Guantanamo long before 2003 and later started to mingle with some prisoners there.

“I still remember that great moment….the time was around 12:49 am in December 2003 when I embraced Islam…at that night, I took this landmark decision after numerous chat sessions with Al Rashdi,” he said.

“It was a memorable moment in my life…….many prisoners sat around me when I converted and decided to call me Mustafa as their new friend…later I added the name Abdullah so I am now called Mustafa Abdullah.”

Brooks said he had been delighted when the US army decided to send him to Guantanamo as it was an adventure for him since had not seen a prison before.

“When I arrived there, it was a big shock for me… even before I entered the prison buildings, I could see that it was horrible and could suit only cactus and poisonous reptiles….I then asked myself ‘are those people behind the bars really so dangerous that they are worth these costly security measures.”

Brooks said he started to be interested in Islam after his talks to Al Rashdi and other prisoners about Islam, Palestine, Afghanistan and the Middle East.

“I used to sit just outside their cells at night listening to them…by time, a sort of mutual respect developed between us …I had never believed in God before I went to Guantanamo.…now that I embraced Islam, I can feel the sweetness of religion…Islam is a pure religion and the ultimate right.”

Brooks said he had first concealed his decision to convert to Islam from other US guards at Guantanamo, adding that when the officer learned about it, he and the other soldiers began to treat him cruelly and accused him of betraying America. Around two years before the end of his contract, he was fired from the army.

“I am now working on a book about my experience to embrace Islam.…I have just quit my job in the US to devote my time to helping the prisoners in Guantanamo..…what is happening in that prison is really inhuman and violates the minimum principles of human rights,” he said.