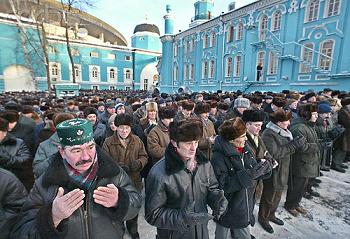 A court decision to close a leading Islamic organization in Russia was criticized as bureaucratic political order targeting the Muslim minority and reflecting a growing authorities’ desire to bring the country’s Muslims under Kremlin control.

“This is a bureaucratic order from people who want the Muslim part of society to be represented by puppets,” Abdul-Wahid Niyazov, the chairman and founder of the Islamic Cultural Centre, told The Moscow Times on Friday, May 27.

On Wednesday, the Supreme Court confirmed a decision from the Justice Ministry last fall to close the centre for “multiple violations of financial regulations.”

Confirming political reasons behind the ruling, Niyazov said the evidence presented by the Justice Ministry was obtained under pressure from the Federal Security Service (FSB).

He said many of the centre’s regional directors had resigned after receiving intimidating calls from the FSB.

“Any member of our regional staff will testify that they were threatened and pressured,” he said at a Supreme Court hearing Tuesday, Interfax reported.

He added that he would appeal the decision with a complaint to the European Court of Human Rights in Strasbourg.

Another complaint would be made to the All-Russia People’s Front, the political vehicle set up by Prime Minister Vladimir Putin earlier this month.

The Islamic Cultural Centre, whose work has been suspended since last fall, held exhibitions, news conferences and readings and hosted visiting Islamic dignitaries.

It describes itself as the “public arm” of the Council of Muftis, one of four organizations representing the country’s Muslims.

Council spokeswoman Gulnur Gaziyeva said the centre’s work was directed at the well-being of the country’s Muslims.

“We believe that we can correct the legal problems and re-register the organization,” she said by telephone.

There are some 23 million Muslims in the Russian Federation concentrated in the north of the Caucasus, representing roughly 15 per cent of its 145 million population.

Islam is the country’s second-largest religion, behind the Russian Orthodoxy.

On the other hand, the centre’s closure was welcomed by other rival Muslim organization in Russia, reportedly supported by the Kremlin.

“This so-called public arm of the Council of Muftis was just a poor excuse for a sham,” Mukhammedgali Khuzin, the executive chairman of the All-Russia Muftiate, said.

Khuzin accused the centre of doing harm to the Muslim community and to the country’s interfaith relations.

Yet, he did not elaborate on examples of this harm.

Despite Khuzin’s accusations, many analysts linked the struggle to Russian authorities’ desire to bring the country’s Muslims under tighter control.

Alexander Soldatov, a religions expert with Portal-credo.ru, said that the move followed mass prayers organized by the Council of Muftis at Moscow’s central mosque for the Eid al-Adha feast last November.

After showing up a large Muslim gathering, a frightened Kremlin sought a way out to silence them, he added.

“After the prayers last fall they introduced the All-Russia Muftiat — which is obviously directed against the council,” Soldatov said.

Last December, Moscow saw the worst nationalist riots in its post-Soviet history after the killing of a football fan in a street fight between far-rightists and immigrant workers.

Chanting “Russia for Russians, Moscow for Muscovites”, thousands of Russians attacked anyone of a non-Slavic appearance.

Xenophobic attacks are common in Russia, particularly against people from the former Soviet republics, who flock by the millions to Moscow and other large cities to work.

Building mosques has been facing stiff oppositions from Russian residents.

Last October, residents wrote to the Russian president demanding the halt of plans to build a mosque in Tekstilschiki district in Moscow.

Following these riots, authorities backed away from plans to build a mosque in the south eastern Tekstilshchiki neighbourhood after complaints from local residents.

Although the capital boasts scores of mainly Muslim migrants, it officially only has four mosques.

On Thursday afternoon, City Hall officials held talks with Muslim representatives over the issue. No results of the meeting were immediately released.