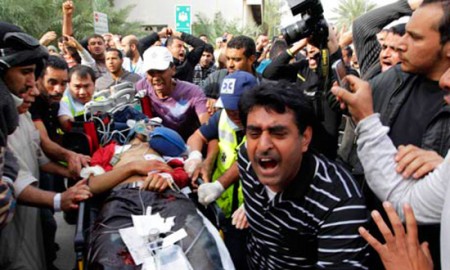 An elderly Bahraini man walks past a wall spray painted with political graffiti and painted over again many times Sunday, May 22, in the western Shiite Muslim village of Malkiya, Bahrain.

The first sign that Bahrain’s security forces were going to detain former Bahraini parliamentarian Jawad Fairooz came at 8:30 p.m. May 2, when about 30 masked men carrying submachine guns broke down the front door of his house.

“What are you doing in my house?” Fairooz’s wife screamed as the men, some in military uniforms, flooded into the front hall. One pointed a submachine gun at her head. “Where is Jawad?” he demanded.

Fairooz, a graduate of the University of Texas at El Paso, had been elected to the Bahraini parliament in 2006 and again in November 2010, but he’d resigned in February to protest police violence against peaceful demonstrators who were demanding democratic reform, Bahrain’s response to the “Arab spring” toppling of dictatorial regimes in Egypt and Tunisia.

Now he was about to feel the brutal force of Bahrain’s crackdown on the opposition.

Fairooz is one of about a dozen prominent opposition leaders and human rights advocates now behind bars in the island kingdom, home to the US Navy’s 5th Fleet. President Barack Obama referred to them in his speech last week on the Middle East, in which he pointedly told Bahrain that “you can’t have a real dialogue when parts of the peaceful opposition are in jail.”

A detailed examination of Bahrain’s arrest and treatment of the dissidents shows widespread and systematic abuse that raises questions about whether the country’s Sunni Muslim government has crossed a line beyond which it can’t restore social peace in the predominantly Shiite Muslim country.

Interviews and email exchanges with relatives of four of the jailed politicians yielded startlingly similar stories of dramatic and humiliating middle-of-the-night raids by 30 to 40 masked gunmen, followed by weeks of beatings and abuse in custody. None of the men has been charged with a crime.

The police often directed anti-Shiite slurs at the distraught families. There were neither warrants nor judicial procedures, and the arrested politicians were held in solitary confinement without access to family or lawyers.

Jawad Fairooz had a simple request for his captors as he descended the stairs to meet them from the upper floor of his well-appointed home. “Can I change my clothes?” he asked. It was out of the question.

His wife lost her composure. “Stop screaming or we’ll take your kid,” they responded, referring to her 17-year-old son, Amin.

“Where are you taking him?” she asked, referring to her husband. “We’re going on a ‘picnic,’ ” was the cynical reply. For how long? She asked. “It depends on how fast he cooperates.”

Exactly what happened after his arrest is known only to his captors and to Fairooz, who hasn’t been able to communicate with his family. All they know is that he wound up in Bahrain’s military hospital at 10 the next morning.

“People who saw him said that he was in bad shape,” said a close relative, who couldn’t be further identified for his own safety.

On May 18, a military prosecutor questioned Fairooz, according to his attorney, Abdullah al Shamdawi, but Shamdawi was prevented from attending the session and had no contact with Fairooz.

Mattar Ebrahim Mattar, who also resigned in protest from parliament in February, was seized within minutes of Fairooz.

Mattar’s family calls it a kidnapping, and that would be an apt description – if it weren’t for the government’s involvement.

The snatch began with an elaborate setup that involved a woman unknown to Mattar who asked him to pick up an envelope with contents she couldn’t describe.

After a rendezvous near a big supermarket, Mattar was driving toward the headquarters of the Wefaq, a Shiite political group, with the woman following, when he looked in the rearview mirror and saw a group of masked men in vehicles near the woman’s car.

The masked men overtook him and cut him off. They emerged with submachine guns drawn, surrounded his car, and pointed the weapons at his head.

Mattar, who holds a master’s degree in artificial intelligence and computer science, told McClatchy a few days before his arrest that he knew he might be detained. A bright, highly personable, but low-key leader of Wefaq, his name had come up during the secret military trial of seven Shiites accused of killing two Bahraini policemen in mid-March.

In a videotaped confession that was played during the trial, defendant Ali Isa Saqer said that Mattar had encouraged the protesters to run over police. Saqer’s “confession,” which later was aired on Bahrain’s government-controlled television, was delivered in a flat monotone, and he appeared to be under duress. Saqer died April 9 while in detention, one of four detainees who have died while incarcerated. A video of his corpse at the ritual washing ceremony showed signs of severe beatings. The Bahraini government has acknowledged that he died of torture.

Mattar’s family also has had no direct contact with him. But a witness said he’d heard Mattar screaming while being severely beaten during his “interrogation” at the same facility. Mattar was limping, looked weak, was blindfolded and in handcuffs, his clothes covered with sweat and blood, said the witness, who couldn’t be identified for his own safety.

One question the witness heard fired at Mattar concerned his relations with the international news media. After three weeks, both elected representatives were transferred to the Al Qareen jail in the south of Bahrain, where other prominent opposition figures are being held, a relative of Fairooz’s said.

One of the most distinguished opposition leaders now in detention is a Sunni: Ebrahim Sharif, a 53-year-old politician, former candidate for parliament and businessman who’s the secretary-general of Waad, a moderate secular political grouping that’s also known as the National Democratic Action Society.

Around 40 masked security personnel, most in civilian clothes, surrounded Sharif’s house at 2 a.m. March 17, as the island-wide crackdown began. Two men in traditional white Bahraini gowns supervised as a pair of young police officers vaulted over the outer wall of the house, one to press the electric garage door opener as the other approached Sharif and pointed a gun at him.

“It’s OK. I’m coming,” Sharif told him. His wife, Farida Ismail, who’s in charge of training for the party, asked the authorities where they were taking him.

“To the City Centre mall,” was the brusque reply. “You can call there to find out where he is.”

It was a full week before he was allowed to contact his wife, and the call was cut seconds after it began. Later the family learned that he’d suffered continuous and severe beatings during the first two weeks he was held, and had lost 45 pounds.

On May 2, Sharif’s wife issued a cry for help, saying he’d spent 47 days “in a notorious prison, suffering under brutal and continuous torture.” She said he’d been taken to the military hospital twice, but that his family hadn’t been allowed to see him.

“We do not know whether he will be able to further tolerate daily beatings and torture and pray he survives this unspeakable treatment,” she said.

Between May 8 and May 22, Sharif had four hearings before a military tribunal, but his lawyer was able to attend only one session. He’s been charged with conspiring to overthrow the monarchy.

‘I never sleep at night’

Fairooz, Mattar, and Sharif are all known as moderate reformers who advocate a constitutional monarchy with an elected government in place of the royal regime.

In the super-heated atmosphere of Bahrain, however, Hassan Mushaima has been widely painted as a radical. Secretary-general of the Haq party, he favours abolishing the monarchy and establishing a modern parliamentary democracy.

For years, Mushaima had lived in exile in Britain. But when the protests began, he decided to return to his homeland.

Many foreign diplomats think that his return led to a radical turn in the protests, but one thing is certain: Bahrain made a major concession when he returned, releasing all political prisoners. When the crackdown began, however, there was no deference.

Mushaima was arrested the same day as Sharif.

His captors arrived in 10 police vehicles at about 4 a.m. As in the other cases, they wore masks and were armed.

“We have an order to arrest you,” one told Mushaima, but he didn’t show any papers. Mushaima went without a fight, but the family still doesn’t know where he’s being held.

He told one member of his family that he’d been subjected to severe abuse. “I couldn’t sleep since I was arrested,” he said. “I never sleep at night. I hear other people being beaten,” the family member quoted him as saying. He, too, has now been charged with plotting to overthrow the monarchy.