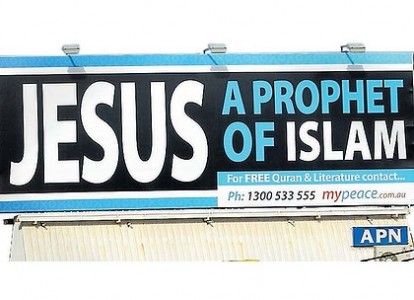 Christians in Sydney will have their core beliefs challenged by provocative advertisements due to appear on billboards and buses in the next month.

The ads, paid for by an Islamic group called MyPeace, will carry slogans such as ”Jesus: a prophet of Islam”, ”Holy Quran: the final testament” and ”Muhammad: mercy to mankind”.

A phone number urges people to call to receive a free Koran and other Islamic literature.

The organiser of MyPeace, Diaa Mohamed, said the campaign was intended to educate non-Muslims about Islam. He said Jesus was a prophet of Islam, who was to come before Muhammad. ”The only difference is we say he was a prophet of God, and they say he is God,” Mr Mohamed said. ”Is it thought-provoking? Yes, it is. We want to raise awareness that Islam believes in Jesus Christ,” he said.

Mr Mohamed said he hoped the billboards would encourage Christians and Muslims to find common ground. They were not intended to downgrade the significance of Jesus. ”We embrace him and say that he was one of the mightiest prophets of God.”

MyPeace plans to extend the campaign, funded by private donations, to television.

The Anglican Bishop of South Sydney, Rob Forsyth, said it was ”complete nonsense” to say Jesus was a prophet of Islam. ”Jesus was not the prophet of a religion that came into being 600 years later.”

But the billboard was not offensive, he said. ”They’ve got a perfect right to say it, and I would defend their right to say it [but] … you couldn’t run a Christian billboard in Saudi Arabia.”

The bishop said he would pay for billboards to counter those of MyPeace if he could afford it, and ”maybe the atheists should run their billboards as well”.

A spokesman for the Australian Islamic Mission, Siddiq Buckley, said the campaign would increase awareness of the positive facts of Islam. ”I would be looking at this as a good opportunity to explain what we mean.”

JOIN the discussion on this topic in our 10,000 member forums here: