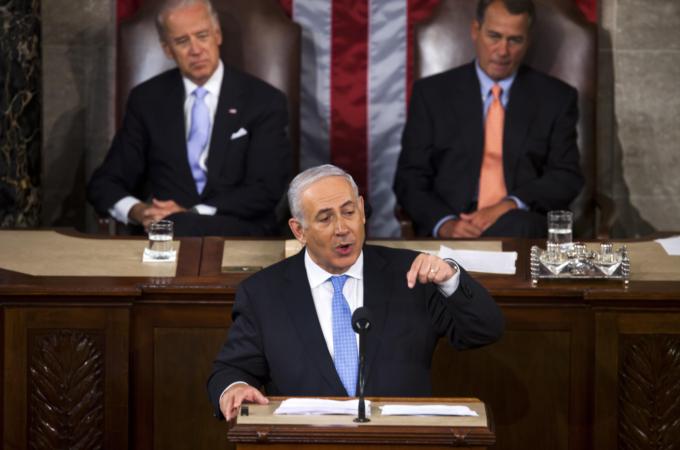 If anyone had any doubt about whether the Palestinians would declare a state in September, they can’t have them now.

On Tuesday, Prime Minister Binyamin Netanyahu delivered a speech to Congress that essentially was a series of insults to Palestinians and every insult was met by applause and standing ovations.

In fact, Netanyahu’s appearance itself was an insult.

In the entire history of the United States, only four foreign leaders have addressed joint sessions of Congress more than once.

And now Netanyahu. For what?

In his entire term in office he has done nothing but reject every request by the United States that he take some action (like freezing settlements) to promote Israeli-Palestinian negotiations. In the history of Israel, there has been no prime minister as hardline on Palestinian rights and as indifferent to the wishes of the United States as Netanyahu.

So why was he invited to address a rare joint session?

He was invited because the new Republican leadership of the House of Representatives wanted to demonstrate, loudly and clearly, that Congress will not support President Barak Obama in the event that he tries to achieve an Israeli-Palestinian agreement.

And that is exactly what the Netanyahu appearance today did demonstrate. The prime minister unambiguously stated that he had no intention of making peace with the Palestinians.

He began by saying that, in point of fact, there is no occupation, stating, that “in Judea and Samaria [the term Israeli right-wingers use for the West Bank], Israelis are not foreign occupiers” but the native inhabitants. (He cited Abraham and Isaiah from the Bible!)

He said he might consider giving up some of that land but not an inch of Jerusalem. Additionally, he said that Israel would retain most settlements and insist on a military presence in the Jordan Valley (thereby ensuring the any State of Palestine would be locked in on both sides by Israel).

He said that Israel would never negotiate with a Palestinian government that included Hamas, whether democratically elected or not. He declared that not a single Palestinian would be allowed to return to Israel; not even a symbolic return would be acceptable to him.

There is little reason to elaborate. Netanyahu today essentially returned to the policies that Israel pursued before Yitzhak Rabin and Yasir Arafat agreed on mutual recognition and the joint pursuit of peace.

And the worst part is not the appalling things Netanyahu said, but how Congress received them. Even Netanyahu’s declaration that there is no Israeli occupation was met with thunderous applause with the Democrats joining the Republicans in ecstatic support. Every Netanyahu statement, no matter how extreme, was met with cheers.

Netanyahu was also applauded wildly when he invoked Palestinian terrorism over and over again, even seeming to lump his former “partner,” President Mahmoud Abbas with people who “educate their children to hate, [who] continue to name public squares after terrorists. And worst of all continue to perpetuate the fantasy that Israel will one day be flooded by the descendants of Palestinian refugees.”

His bottom line, which Congress fully bought, was that all Palestinians are terrorists who haven’t earned a state. And probably never will.

Congress cheered and cheered and when Netanyahu was finished, they climbed over each other to touch the hem of his garment.

It was as if Congress thought that no Palestinians or other Arabs (or Muslims) would be watching. It was as if it believes that it can shout its lungs out for Netanyahu (and thereby secure those campaign contributions from AIPAC), without any consequences to US policy and national interests in the Arab world.

But Congress is wrong. The message it sent to the Middle East today, to the whole world, in fact, was that Palestinians cannot count on the United States to ever play the role of “honest broker” between Israel and the Palestinians. Even if President Obama was inclined to, Congress would stop him. And AIPAC, using the leverage its campaign contributions gives it, would hold Obama’s feet to the fire too. As far as Congress is concerned, Palestinians do not exist. They have no rights, to a state least of all.

And that is why Palestinians have no choice but to unilaterally declare a state in the fall. They cannot count on America. As David Ben Gurion understood when he went to the General Assembly to achieve recognition of Israel, a small, powerless people must take its destiny into its own hands.

The good news is that, although Congress is in Netanyahu’s pocket, the Obama administration isn’t. Netanyahu insulted the President at the White House last Thursday and then again in the halls of Congress by eliciting support for policies Obama rejects. And the administration is furious.

That means that although Palestinians can and should ignore Congress, the White House and State Department are still in play. Yes, they will both go along with Netanyahu, but, probably, without much enthusiasm.

And they can send a signal to our allies that although the United States cannot openly oppose Bibi’s policies because of Congress – and AIPAC’s control of it – the allies can. The Palestinians should not give up on Obama or on Secretary of State Clinton either who cannot abide Netanyahu and made sure she was out of the country to escape being present for his speech.

And so we can look forward to a unilateral declaration of statehood in September. The Israelis who refuse to negotiate with stateless Palestinians will have no choice but to negotiate with the state whose land it is occupying. And those negotiations, state to state, may produce peace and the “two states for two peoples” that most Palestinians and Israelis aspire to. In any case, it’s the only hope.

Palestinians should thank Prime Minister Netanyahu and, even more, the United states Congress for making their choice so much easier. Together they helped create the Palestinian state today. And that is a very good thing.

As for Americans, we should be deeply ashamed of our Congress. It has been sold to the highest bidder.