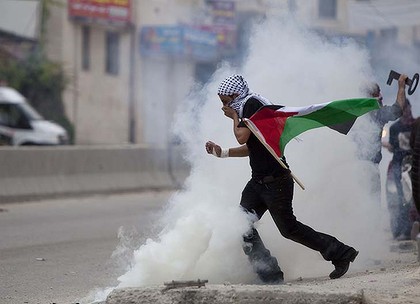 Then we had to hear what America’s ‘role’ was going to be in the new Middle East. We did not hear if the Arabs wanted them to have a role.

It was the same old story. Palestinians can have a “viable” state, Israel a “secure” one. Israel cannot be de-legitimised. The Palestinians must not attempt to ask the UN for statehood in September. No peace can be imposed on either party. Sometimes yesterday, you could have turned this into Obama’s forthcoming speech to pro-Israeli lobbyists this weekend. Oh yes, and the Palestinian state must have no weapons to defend itself. So that’s what “viable” means!

It was a kind of Second Coming, I suppose, Cairo re-pledged, another crack at the Middle East, as boring and as unfair as all the other ones, with lots of rhetoric about the Arab revolutions which Obama did nothing to help. Some of it was positively delusional. “We have broken the Taliban’s momentum,” the great speechifier said. What? Does he really – really – think that?

Of course, there was the usual rhetoric bath for Libya, Syria, Iran, the usual suspects. And there were the words. Courage. Peace. Dignity. . A creature from Mars would think that the man had helped to bring about the revolutions in the Middle East rather that sat primly to one side in the hope that the wretched dictators might survive.

There was some knuckle-rapping to Bahrain (no revolution there, of course) and there was not a word about Saudi Arabia, although I rather fancy its elderly king will be on the blower to Obama in the next few days. What’s all this about change in the Middle East?

We got one timid reference to “Israeli settlement activity”, a crack at Hamas (naturally), lots of tears for the Tunisian vegetable vendor, Mohamed Bouazizi, who started off the revolutions – Tunisia being one state that Obama never actually mentioned until Ben Ali had run away. The “humiliation of occupation” for the Palestinians – this was a straight repeat of Cairo two years ago – and the tale of a Palestinian “who lost three daughters to Israeli shells” in Gaza. I got the point, of course. The man just “lost” his daughters to shells that happened to fall on them; no suggestion that anyone actually fired them.

Is Obama just talking too much? I fear so. He was cashing in, bathing in his own words as he did in his miserable performance when he got the Nobel Peace Prize for Speechmaking.

And then, I guessed it before he said it, he compared the Arab revolutions to the American revolution. We hold these truths to be self-evident, etc, etc. That many Arabs fought and died to be free of us than to be like Americans was quite lost on him. And then we had to hear what America’s “role” was going to be in the new Middle East. We did not hear if the Arabs wanted them to have a role. But that’s Obama for you. Always searching for a role.

Well, this weekend is Netanyahu’s weekend and the Israeli settlements – more were flagged only hours before Obama spoke – will go on as before. And by the time Obama ends up swearing eternal loyalty to the Israelis, the Arabs will forget yesterday’s posturing. And the reference to the “Jewish state” was obviously intended to make Netanyahu happy. Last time I went there, there were hundreds of thousands of Arabs who lived in Israel, all of them with Israeli passports. They didn’t get a reference from Obama. Or maybe I was just imagining.