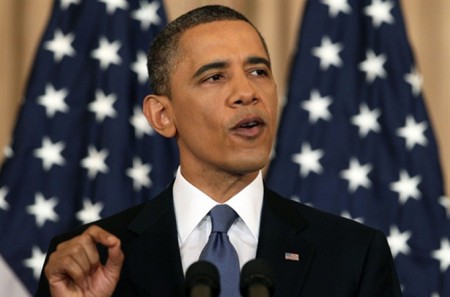 * Palestinians must explain reconciliation with Hamas

President Barack Obama laid down his clearest markers to date on compromises Israel and the Palestinians must make for peace but his stance is unlikely to yield serious talks, let alone an agreement, any time soon.

There was something for each side to like, and to despise, in his comments about the decades-old Israeli-Palestinian conflict as part of a meditation on how the United States is grappling with the popular upheavals sweeping the Arab world.

In a victory for the Palestinians that drew an immediate rejection from Israel, Obama said “we believe the borders of Israel and Palestine should be based on the 1967 lines with mutually agreed swaps.”

The position essentially embraces the Palestinian view that the state they hope to build in the West Bank and Gaza Strip should largely be drawn along the lines that existed before the June 1967 war in which Israel occupied both territories.

While this has long been the private view in Washington, Obama went further than U.S. officials have gone in the recent past, when they have described such a solution as a Palestinian aspiration but have not embraced it as their own.

Obama also delivered messages that will be hard for the Palestinians to swallow, suggesting their effort to win U.N. membership for a Palestinian state is doomed and that they have a lot of explaining to do about a reconciliation deal with Hamas, which the United States regards as a terrorist group.

The result, analysts said, was more clarity on how the United States sees an ultimate peace deal, particularly on the issues of territory and security, but no real impetus for fresh negotiations that might deliver one.

“He has tried to set the reset button for negotiations, which kind of takes us back to square one,” said Salman Shaikh, director of the Brookings Doha Centre.

“As important a marker as this may have been for the inside-the-Beltway Middle East policy analyst, the key metric is whether it gets the leaders to move,” said Brian Katulis, a Centre for American Progress think tank security expert.

“Obama clearly sees a showdown coming in September, but I don’t think he unveiled anything that will lead to preventing that showdown,” Katulis added, referring to the Palestinian plan to seek admission to the United Nations as a full member when the U.N. General Assembly meets that month.

In practical terms, Abbas’ quest is all but sure to fail — to become a full member of the United Nations, the Palestinians would first have to secure the blessing of the U.N. Security Council, where the United States holds a veto.

But Abbas may hope that a U.N. General Assembly vote that overwhelmingly backs a Palestinian state may provide a symbolic victory and increase pressure on Israel to make concessions even if it changes nothing on the ground.

Obama clearly sought to warn the Palestinians off.

“Efforts to delegitimize Israel will end in failure,” he said. “Symbolic actions to isolate Israel at the United Nations in September won’t create an independent state.”

He added that a Palestinian state must be “non-militarized” and any peace deal’s security provisions must be “robust enough to prevent a resurgence of terrorism, to stop the infiltration of weapons and to provide effective border security.”

Edward Djerejian, a former U.S. ambassador to Israel and Syria, said he viewed the president’s focus on territory and security as a sign of his determination.

“This in my mind is a clear signal … that he is intent on seeing initiated serious, direct face-to-face negotiations by the Israelis and Palestinians,” he said.

NO WAY OUT OF IMPASSE

Starting talks on territory and security still leaves what Obama called the “wrenching” issues of the fate of Palestinian refugees and the future of Jerusalem to be resolved.

He acknowledged the difficulty of resuming talks, especially given Israeli questions about reconciliation between Abbas’ Fatah, which governs the West Bank, and Hamas, the Islamist group that took control of the Gaza Strip in 2007.

“How can one negotiate with a party that has shown itself unwilling to recognize your right to exist?” Obama asked. “In the weeks and months to come, Palestinian leaders will have to provide a credible answer to that question.”

In his presidency’s third year, Obama has little to show for his effort to revive direct negotiations apart from a brief interlude when they occurred last autumn before unravelling.

“The fundamental shortcoming in the approach the president took in laying out terms for a settlement is that he didn’t provide a pathway out of the current impasse,” said analyst Robert Danin of the Council on Foreign Relations think tank.