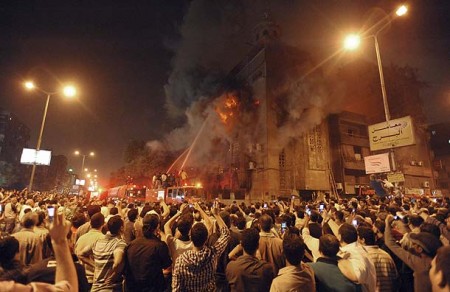 Recent Muslim-Christian clashes have renewed fears of sectarian conflict in Egypt. But many local analysts – along with wide swathes of the public – believe sectarian tensions are being stoked by elements loyal to the ousted Hosni Mubarak regime in possible coordination with Israel.

“Whoever is fanning the flames of sectarian conflict has two objectives: to distract attention from the ongoing prosecution of Mubarak and his henchmen, and to derail what’s being described as the Third Intifadah,” political activist Mugahid Sherara told IPS.

The most recent confrontation was triggered on May 7, after reports that a Coptic-Christian woman who had converted to Islam was being held against her will in a church in Cairo’s Imbaba district. After a number of Muslim residents gathered outside the church to investigate, shots were reportedly fired from a neighbouring building, killing several of them.

“The first shots, fired from an automatic weapon, originated from a building adjacent to the church,” recalled Sherara, who witnessed the events.

Hearing the gunfire, hundreds of local residents quickly arrived to the area. Clashes soon erupted between Christians and Muslims, which quickly escalated into an exchange of gunfire. Eyewitnesses from both sides, however, later said that unidentified gunmen had instigated the violence by firing randomly into the crowd.

By the time the army arrived some 90 minutes later, 15 lay dead, both Muslims and Christians, and more than 230 injured. Dozens were arrested.

During the clashes, meanwhile, another Coptic church – located some two kilometres away – was set on fire by gunmen. While there were no resultant deaths or injuries, the church was badly damaged by the blaze.

While the twin incidents were initially attributed to local Muslim-Christian rivalries, it later emerged that the violence had been largely instigated by outsiders.

“Initial investigations confirm that the events in Imbaba were planned and instigated by hired ruffians, not religious zealots,” Justice Minister Mohamed Abdelaziz al-Gindi announced on May 11. He went on to blame the incidents on an ongoing “counter-revolution aimed at destroying national unity.”

Egypt’s recent Jan. 25 Revolution led to Mubarak’s February ouster after 30 years in power. Since then, the country’s affairs have been run by Egypt’s Supreme Council of the Armed Forces (SCAF).

A May 11 report issued by the state-run National Council for Human Rights concluded that the church- burning incident had likewise been the work of “hired thugs who were not from the neighbourhood.”

Accounts by eyewitnesses appear to support this conclusion.

“The men who torched the church looked like professional thugs, not religious extremists. They weren’t from around here. It looked pre-planned,” one Coptic eyewitness, preferring anonymity, told IPS. The eyewitness added that frictions between the neighbourhood’s Muslims and Christians had been “previously unheard of.”

The May 11 edition of state daily Al-Missa quoted local Coptic clergymen who described the events as “a conspiracy.”

Nevertheless, hundreds of Coptic protestors have staged an open-ended sit-in in Cairo’s Maspero district since May 8 to protest perceived discrimination against Egypt’s Christian minority (estimated at roughly ten percent of the majority-Muslim country’s population of 85 million). On May 14, protesters clashed with armed thugs, leaving dozens injured from both sides.

It has not been the first time that apparent sectarian tensions have spilled out of control since Mubarak’s ouster.

In February, reports circulated that the army had opened fire on Coptic monks at a monastery in the Nile Delta, injuring several. The reports infuriated the Coptic community at the time, but they later turned out to be false.

And in early March, the local press reported that several Christians had been killed after a church on the capital’s outskirts was torched by a Muslim mob. Although these reports, too, turned out to be wildly exaggerated, they nevertheless led to violent clashes in which 13 people – both Christians and Muslims – were killed.

Numerous local commentators blame the mounting sectarian tension on “remnants of the former regime,” which, they say, have a vested interest in derailing post-revolutionary Egypt’s transition to democracy. A number of commentators, including prominent political figures, have also alluded to a possible Israeli role in the recent sectarian flare-ups.

On Mar. 15, Deputy Prime Minister Yehia al-Gamal, appointed by the ruling SCAF following Mubarak’s ouster, warned of a “counter-revolution directed by elements of the former regime and Israel, which… is currently working against Egypt’s interests.”

Mohamed Selim al-Awa, former secretary-general of the International Union of Muslim Scholars, speaking to Al-Jazeera on May 10, alleged that “Israel is trying to thwart Egypt’s revolution by any means possible.” He went on to point to “elements of the former regime that will ally themselves with anyone to restore the status quo.”

On the following day, prominent political commentator Fahmi Howeidi asserted that “the possibility of Israeli involvement (in the ongoing sectarian strife) cannot be ruled out.” Israel, he wrote in independent daily Al-Shorouk, “was badly frustrated by the ouster of Mubarak, who Israel officials had publicly described as a ‘strategic treasure’.”

Notably, last November, former head of Israeli military intelligence Amos Yadlin openly bragged about Israel’s success in “promoting sectarian tension” in Egypt. “We have succeeded in promoting sectarian and social tension there so as to create a permanent atmosphere of turmoil,” Yadlin was quoted as saying in the Hebrew- and Arabic-language press.

On Friday (May 13), hundreds of thousands of Egyptians amassed in Cairo’s Tahrir Square to both appeal for national unity and express solidarity with the Palestinian cause.

“Egypt’s Christians and Muslims have always lived side-by-side in peace,” Mikhail Henna, a Coptic political activist who attended the rally, told IPS. “But there are still elements loyal to the former regime – along with external forces hostile to Egypt – trying to sow fitna (discord) in hopes of destabilising the country and derailing our revolution.”