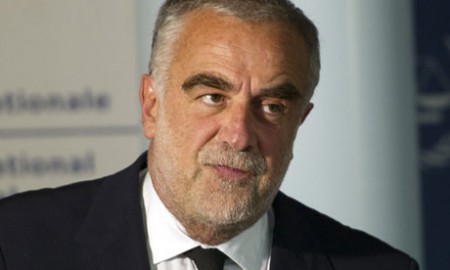 Libyan officials have described the international criminal court’s move to seek an arrest warrant against Colonel Muammar Gaddafi as irrelevant, claiming it would have little impact on the country’s embattled leader.

Libya’s deputy foreign minister, Khaled Kaim, cited the continued liberty of Sudanese president, Omar al-Bashir, as an example of the ICC’s “impotence”, saying the veteran dictator was safe in Khartoum despite claims that he had played a direct role in the genocide in Darfur.

An arrest warrant was issued for Bashir in 2008. However, he still travels around Africa and no attempts have been made to seize him.

Kaim said Libya was not one of the 114 member states of the ICC, which was created by the Rome treaty in 1988. He said the court had no jurisdiction on Libyan affairs and suggested it had a vendetta against African states.

“We are more interested [in] the human rights council and in moving forward with trying to implement a ceasefire,” he said.

Warrants are likely to be issued for Gaddafi, one of his sons, Saif al-Islam, and his trusted intelligence chief, Abdullah Senussi. ICC prosecutor Luis Mareno- Ocampo claimed he had built a strong case that each of the three men had directed attacks on civilians since the violent anti-regime uprising began in eastern Libya three months ago.

Neither Gaddafi nor his son reacted to the imminent warrants and his spy chief is almost never seen in public. Reaction was also muted around the Arab world, with none of Gaddafi’s many critics weighing in.

Amnesty International described the move as a “step towards justice”. The group’s international director of law and policy, Michael Bochenek, said: “The request for arrest warrants is a step forward for international justice and accountability in the region.

“However, the international community that came together in such unprecedented agreement to refer Libya to the international criminal court, cannot allow justice to appear selective. By any standard, what is happening in Syria is just as bad as the situation was in Libya when the [UN] security council referred that country to the ICC.

“Real international justice has to be for everyone in the Middle East and North Africa.”

The few Libyan officials authorised to speak in Tripoli regularly complain that leaders in Bahrain, Syria and Yemen are not held to the same standards as Gaddafi, a figure reviled by his neighbours, Europe and the United States over many years.

“Why is this not happening to Syria?” asked one official. “By any measure what they have been proven to have done is far worse than what Gaddafi is alleged to have done. There is a clear double standard. It is beyond a joke.”

There seems little chance that Gaddafi will be arrested in coming weeks even if the warrants are issued. The ICC has no police force of its own and relies on officers in member states to enforce arrests.

Gaddafi has been lying low over the past fortnight, convinced that Nato is personally targeting him.

He appears to maintain a hold on power in the capital, with dissidents maintaining a low profile for now. In the absence of the city falling to rebels, it seems unlikely that members of Gaddafi’s loyalist forces would have the means or motivation to arrest him on behalf of the ICC.

Gaddafi’s whereabouts are unknown. However, he is being protected by a special forces unit within the Libyan military that has been dedicated to him for much of the past four decades.