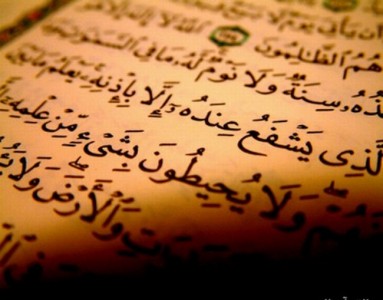 All praise is due to Allah. I thank Allah for giving me guidance to Islam.

I became Muslim when I was 15 years old.

My mom is Syrian (family from Halab) born in Detroit, and my dad is American with parents from Polish/Slovak background.

I was also born in Detroit Michigan. My grandma is Maronite, and my mom and dad are both Catholic.

When I was fifteen I wanted to be a nun.

I was in my World History class in high school and we were studying all the major religions. When we got to Islam I was very interested, and there was an Egyptian brother (Muslim) in my class who was correcting the teacher when he would make a mistake, and I thought “Wow!”  he must have strong faith to be correcting the teacher like this.

So one day, I asked him what is the difference between Catholicism and Islam. He said that there was not that much.  Well I was not satisfied with this answer so I asked his mom if I could have a copy of the Quran in English.  She gave me one and when I started to read it, I couldn’t put it down. I just kept reading it and I knew it was from Allah.  You just know there is no way a man could write this.  And me being a person who appreciates poetry, I loved it very much as I found it to be amazing. So I became Muslimah in my heart.

And then all the hardships started. I started praying and fasting, etc.  My parents, especially my mom, started giving me a very hard time.  Me being so young, I imagined they would love Islam the same way I did, but for them it was completely different.  They would take away my hijab, my prayer rug, my Quran, and materials about Islam.  My dad would search my room everyday, and I would hide my hijab in the closet.  My mom started trying to forbid me from being friends with Muslims, and she would call my friends’ parents and tell them stop telling my daughter about Islam, and that they are confusing her.

My parents made me go to church, and I would just sit there thinking these people are misguided.  One day my mom set up a conference with me and one of the priests.  I would say I love Islam and why would you think something so beautiful is so bad?  He would tell me this and that and say some quotes from the Bible.  He even told me that my dream (I had a dream I was going to a Muslim country and to the desert wearing hijab) he said this was from Satan, I seek refuge in God.  I thought to myself, this man looked like he had Satan in him when he said this!  I will never forget the look on his face.  I asked Allah to forgive me.

My mom would cook pork for me on purpose and say it was beef, but I checked the wrapper and it said pork.  And my dad, whose parents are Polish/Slovak, would tell me in this house you are either Catholic or you leave.  I even had to hide my Quran in the air conditioning vent so they wouldn’t get it, because they would throw it in the garbage.  They even took the lock off my door, so praying was very hard.  They would make fun of me praying.  I learnt the prayers in Arabic myself with a small prayer book.  I can’t explain how much it would hurt me that my parents were this way towards me and Islam.

I started telling my younger sister about Islam.  My parents told me if I didn’t stop I had to leave.  I stopped, but I told my sister many things and now she questions why Catholics can’t just pray to God and why confession and many other things.  I said a prayer that when I was older I would practice Islam totally.  I stopped praying for a while, may God forgive me.  I had no one to support me or give me guidance except my friends’ parents who said listen to your parents.  My Muslim friends didn’t understand what I was going through, and they weren’t mature or knowledgeable enough to teach me and answer the many questions I had.

One Day at University

One day (when I was 20) while I was in university, I called up the lady who had given me the Quran because I heard there was a mosque just built nearby.  Before then the closest mosque was 45min-1hr. away.  She said they were having a dinner.  So I went, and when I heard the call to prayer, I was so happy and cried.  I repeated the Shahada in public during Ramadan, and I made a commitment to be steadfast and not care what my parents or anyone else said or did.  I felt I could relate at this point to Prophet Yunus, may the mercy and blessings of God be upon him, who was in the belly of the whale.  I was/am determined.  So I stopped bad habits and left bad company, and surrounded myself with Muslims.

I started wearing hijab and my parents would say you are not going outside like that.  But either I did anyway or wouldn’t go.  Sometimes I would put on my hijab in my car so they wouldn’t see me because my mom would always say Islam says to obey your parents, so you must listen to us.  She said you will not wear that thing on your head and you will wear shorts and be stylish.  She told me I look like an old woman wearing Islamic clothing and hijab.

I found a good Muslim from Damascus, Syria.  I got married and moved from Atlanta to Houston

She told me I was selfish for wearing hijab and embarrassing my sister and the whole family.  She doesn’t like to be seen with me in public in the city she lives.  I really got a hard time from my grandma.  I would be praying sometimes and she would yell at me and say, “Don’t you hear me when I am talking to you!”

She even said one time she couldn’t believe Jesus was born miraculously.  They would hear me playing the Quran and literally make fun and laugh and curse at the words.  My grandpa stopped talking to me, my mom told me to go to hell and so did my grandma.  My mom even tried to take me to a psychiatrist when I was younger.  She explained to him I had become Muslim, and he tried to give me psychotic medicine.  I threw it in the garbage.  I found it very hard to study in school with all this craziness going on.  I wanted to study Islam and become like a scholar.  So I started looking to get married.

All praise is to Allah, I found a good Muslim from Damascus, Syria.  I got married and moved from Atlanta to Houston.  A year later I had a boy named Yousuf.  All praise be to Allah, I am very happy and I hope, God willing, to move to Madinah. Allah is very generous.

Recently, I met a sister who was Jordanian who also became Muslim.  She went through a hard time like me.  I hear amazing stories about people embracing Islam like this Jewish guy from New York who moved to Jerusalem and he became Muslim, and his Moroccan Jewish wife became Muslim and kids and he moved to the Muslim localities and learned Arabic.

All praise is due to Allah.

I just thank Allah for giving me guidance to Islam.

My Journey to Islam