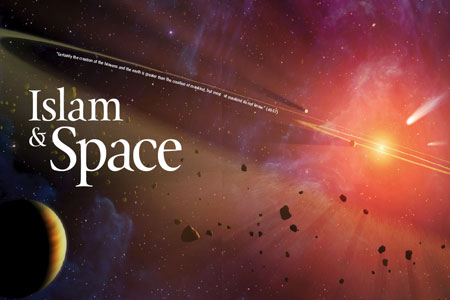 In March this year, the moon reached its closest point to Earth for over two decades. However, with government cuts on space programmes, it seems that we are drifting further away from physically exploring the boundaries of our solar system. Last year, President Obama cut NASA’s Constellation programme, which was planning to re-launch moon missions by 2020, and put humans on Mars by the middle of the century. After nearly 30 years in service, the Space Shuttle programme is nearing retirement. The shuttle Discovery landed on Earth for the last time on 9th March, and in its 26 years of service, it has spent 365 days in space and logged up nearly 240 million km.

Although we may not be venturing out there, that has not held back further discoveries from the ground. Astronomers discovered a planetary system known as Kepler-11 consisting of six planets orbiting a Sun-like star, which is more than 2,000 light years away from Earth. NASA’s Cassini probe detected oxygen in the atmosphere of Rhea, Saturn’s icy moon. This is the first time that oxygen has been found in another environment outside our own.

So, what has Islam contributed to the field of astronomy? Before Islam, Christians and Jews used a 19-year Metonic cycle, which consisted of 12 years of 12 lunar months and seven years of 13 months. The fundamentals of Islam dictated that Muslims should pursue study in the field of astronomy, and this was not down to just rituals. The Qur’an insists that we observe, reason and contemplate to reach conclusions, which was in contrast to the Ancient Greeks who believed reason alone was the key to understanding nature, showing a distrust of the senses. But this was the foundation that 700 years of pre-Islamic astronomical study was built upon.

The Qur’an states that there are to be 12 months in a year (9:36), so the Metonic cycle was ruled out. As the Islamic calendar was also lunar, Muslims had to develop ways of sighting the new moon. Furthermore, prayers were to be performed five times a day, so Muslims had to be aware of the time, and be able to determine the direction of the Ka’ba in Makkah.

As with the other scientific developments, the Muslim world took advantage of its proximity to the ancient learning centres. During the 9th century, much of the Ancient Greek, Sanskrit, and Middle Persian texts were translated into Arabic, so the Muslims were also able to take the best practices from each understanding of astronomy.

Ptolemy’s Almagest was the main text that was used for astronomy at that time. Throughout the 9th, 10th and into the 11th century, the Ptolemaic system was accepted and adjusted based on empirical research. However, it proposed that the Earth did not move and was the centre of the universe. Many of the contemporary Arab astronomers  took this as a given notion, as no other alternative model was proposed at the time. 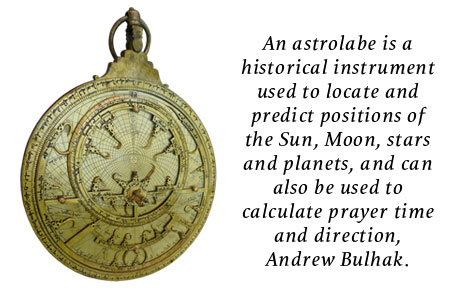 Another contributing factor to the extensive astronomic research was supported by the Abbasid caliph Ma’mun al-Rashid. He brought together Muslim scholars to create an intellectual academy in Baghdad, known as The House of Wisdom.

The first major piece of work in the field of observational astronomy was Zij al-Sindh by al-Khwarizmi in 830 CE. It contained tables for movements of the sun, the moon, and the five planets known at the time. During this time, Habash al-Hasib al-Marwazi compiled The Book of Bodies and Distances based on his observations at the Al-Shammisiyyah observatory in Baghdad. He estimated the Moon’s diameter to be 1,886 miles and its distance from the Earth as 215,209 miles, which are very close to the currently accepted values of 2,156 miles diameter and 238,857 miles distance, respectively.

Following this, al-Farghani and al-Battani also contributed to the Ptolemaic model based on further astronomical findings. Another significant piece of work was The Book of Fixed Stars by al-Sufi, which provided positions, magnitudes, brightness and colour for each constellation. Al-Khujandi also calculated the axial tilt of Earth to be 23.53°, which is very close to the accepted value of 23.44°.

Findings were not only limited to observations, as the eldest Banu Musa brother, Ja’far Muhammed ibn Musa ibn Shakir, did some work in the field of astrophysics. He put forward the hypothesis that the celestial spheres, which were the planets, sun and moon, were subject to exactly the same laws of physics as Earth.

Al-Haytham used this to write his On the Light of the Moon at the start of the 11th century. This was the first successful attempt at combining mathematical astronomy with physics, with the inclusion of experimental methods. He also went on to state that the celestial spheres did not consist of solid matter and that the heavens were less dense than air.

From the middle of the 11th century, a distinct form of Islamic astronomy began to emerge. It was built upon the Hay’a tradition, which sought to harmonise the mathematical and physical principles of the universe. Al-Haytham wrote Doubts on Ptolemy which criticised the geocentric model on empirical, observational and experimental grounds. Finally in 1038, he put together the first non-Ptolemaic model configuration in The Model of the Motions.

Al-Biruni began to analyse the Indian planetary theories too. Some of them proposed that the Earth rotated on its axis, and al-Biruni stated that this would not invalidate his astronomical calculations, as the data is independent of theory. He launched his extensive astronomical encyclopaedia in 1031, known as Canon Mas’udicus, which introduced the mathematical technique of analysing the acceleration of the movement of planets. 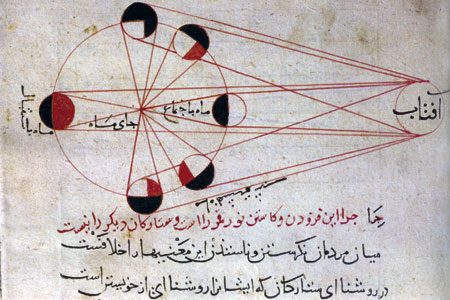 Further advances were made in the 1300s and 1400s, stemming from the Maragheh observatory in Iran. There was the Maragha Revolution, which was also known as The Scientific Revolution before the Renaissance. The astronomers realised that astronomy should aim to describe the behaviour of physical bodies in mathematical language, and should not remain a mathematical hypothesis.

The work at the observatory began with Urdi developing a non-Ptolemaic model, the Urdi lemma. This was followed by al-Tusi who proposed the Tusi-couple as an equivalent to the equants in Ptolemy’s model. Two astronomers, Shirazi and al-Katibi discussed the idea of heliocentricity, where the sun is the centre of our solar system, but nothing came to fruition from it.

It was not until the 14th century that Ibn al-Shatir incorporated Urdi’s lemma and the Tusi-couple to develop a model that was based on empirical observations. His work influenced Nicolas Copernicus to create the heliocentric model that we know today.

It is said that during the Renaissance, Regiomontanus, a German mathematician and astronomer, would look to his Muslim books as sources of information. Many Arabic texts were translated into Latin so that they could be used by European scientists in their studies. In Spain in particular, Gerard of Cremona translated 87 books from Arabic to Latin, which included al-Farghani’s On Elements of Astronomy on the Celestial Motions, and the works of al-Haytham.

There is another individual, whose contribution must be mentioned in the field of astronomy: Ali Qushji. Under the influence of such thinkers as Ghazali, Qushji rejected Aristotelian interference in astronomy, and identified the subject as a purely empirical and mathematical science. The Aristotelian notion had decreed that the Earth was a stationary object, and as previously discussed, this restricted the innovation that astronomy was in desperate need of. Through the observation of comets, Qushji found evidence for a rotating Earth and concluded that the moving Earth theory is just as likely as the stationary Earth theory. Qushji’s views were remarkably similar to those of Copernicus, but it is unlikely that his work influenced Copernicus. Both used al-Tusi’s work as a basis for their own, and were able to reach the same conclusions.

Following this, it appears that the study of astronomy was limited to observational. In 1577, Taqi al-Din built an observatory in Istanbul, and produced astronomical tables that were more accurate than some of his contemporaries in the West, such as Brahe and Copernicus. It was also here that Taqi al-Din was able to develop a collection of astronomical instruments, such as a giant armillary sphere and an accurate mechanical astronomical clock. Unfortunately, his observatory was destroyed in 1580, which some say was due to the rise of a clerical faction opposed to the study of science.

Despite more study of observational astronomy in the Mughal Empire, European astronomy had already taken its prominence in the field following the Copernican Revolution. Whilst it is tragic that Muslims did not contribute any further to the subject, we must recognise the significance of the initial forays into astronomy.