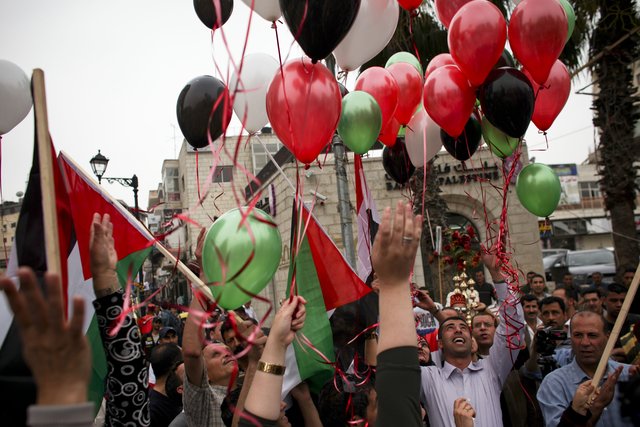 Representatives of Palestinian factions have met in the Egyptian capital, Cairo, to mark a landmark reconciliation agreement signed a day earlier.

Khaled Meshaal, the leader of the Hamas movement, and Mahmoud Abbas, the Palestinian president and leader of Fatah, were attending Wednesday’s ceremony, meeting face-to-face for the first time since 2006.

Speaking at the ceremony, Abbas said Palestinians had turned the “black page” of division between the two rivals.

“We announce to Palestinians that we turn forever the black page of division,” he said.

Taking the podium after Abbas, Meshaal said that his group’s “only fight is with Israel” and that the four-year-old rift with Fatah was “behind us”.

Representatives of the United Nations, the European Union and the Arab League were also present at the gathering at the headquarters of the Egyptian intelligence agency.

The unity deal, which was signed on Tuesday, aims to end the feud between the ideologically divided factions in the Gaza Strip and the occupied West Bank. It involves members of the Palestinian Liberation Organisation (PLO) and Islamic Jihad, Popular Resistance Committee and Hamas.

It will pave the way for presidential and legislative elections within a year.

‘Start of a process’

Al Jazeera’s Sherine Tadros, reporting from Ramallah in the occupied West Bank, said people there saw the agreement as the start of a process.

“But they are happy that for the first time in years, there’s acknowledgement by Hamas and Fatah that one people cannot be ruled by two governments.”

The deal has been denounced by Binyamin Netanyahu, the Israeli prime minister, as “a hard blow to peace process”.

“How can we make peace with a government when half of it calls for the destruction of Israel and glorifies the murderous Osama bin Laden?” he said.

“I call on Abu Mazen [Abbas] to completely cancel the agreement with Hamas and to choose the path to peace with Israel,” Netanyahu said during a meeting with Tony Blair, the former British prime minister, in Jerusalem.

Israel, the United States and the European Union consider Hamas, which controls Gaza, a “terrorist organisation”.

The Quartet of Mideast mediators – the US, the EU, United Nations and Russia – has long demanded that Hamas renounce violence and recognise the principle of Israel’s right to exist.

Netanyahu’s call on Abbas to cancel the agreement was denounced as “unacceptable interference” by Azzam al-Ahmed, the head of Fatah’s delegation.

Abbas said Israel does not wish to see the Palestinians united because it thrives on their divisions.

“There are no guarantees for the success of the agreement, which has many enemies and there are attempts to undermine the agreement from several parties,” Abbas told the Al-Ahram newspaper.

“Despite the fact that there are no guarantees to make this agreement successful there is a will and a way to agree,” he said.

Former US president Jimmy Carter urged the international community to support the deal, saying it would improve the chances for Middle East peace.

In an op-ed for the Washington Post, he called on the US and the international community to look past Hamas’s pledge to destroy Israel and argued for the potential benefits of a unified Palestinian democracy.

“If the United States and the international community support this effort, they can help Palestinian democracy and establish the basis for a unified Palestinian state in the West Bank and Gaza that can make a secure peace with Israel,” Carter wrote.

Under the deal, three separate committees will be formed, to plan for the upcoming elections, reform the PLO, and to incorporate a security system between Gaza and the occupied West Bank.

Al Jazeera’s Tadros said one of the biggest challenges would be to merge all the existing security forces into a national Palestinian force.

“In the West Bank alone there are three separate forces,” she said. “In Gaza, you have Hamas police forces and armed military wing. So how do you combine all these forces into one Palestinian national force? That is a huge question.

Palestinian officials say the new government’s role will be to manage affairs in the Palestinian territories, while the Palestine Liberation Organisation (PLO) will remain in charge of peace talks with Israel.

Fatah and Hamas have been bitterly divided since June 2007 when Hamas took over the Gaza Strip, routing Fatah loyalists in bloody confrontations that effectively split the Palestinian territories into two separate entities with separate governments.

Al Jazeera’s Nicole Johnston, reporting from Gaza City, said about 1,000 people there were celebrating the deal, waving flags of Fatah, Hamas and other groups.

“About a month ago, that would have been an impossible scene in Gaza,” she said.

She said many people in Gaza, remembering what happened in 2007, when about 100 people were killed in fighting, welcomed the unity deal.

“When you speak to people who were victims during the 2007 fighting, they say they desperately want reconciliation”, she said.

“They want their children to no longer live under Israeli-Egyptian siege and they feel that reconciliation is the best way forward.”