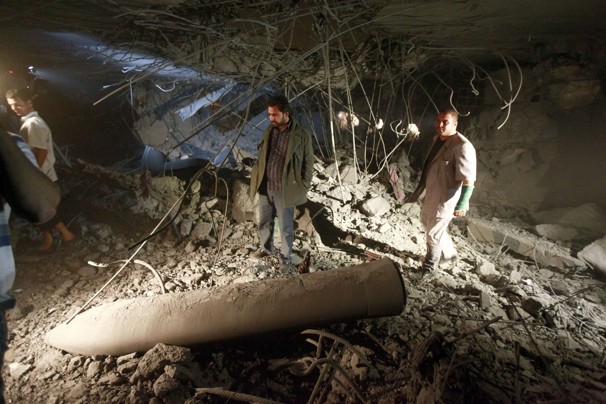 TRIPOLI, Libya — The youngest son of Libyan leader Moammar Gaddafi was killed in a NATO airstrike on his home Saturday evening, along with three of Gaddafi’s grandchildren, the Libyan government announced Sunday.

“The house of Mr. Saif al-Arab Moammar Gaddafi . . . who is the youngest of the leader’s children, was attacked tonight with full power,” government spokesman Moussa Ibrahim said at a news conference. “The leader and his wife were there in the house with other friends and relatives.

“The attack resulted in the martyrdom of Mr. Saif al-Arab Moammar Gaddafi, 29 years old, and three of the leader’s grandchildren,” Ibrahim said. “The leader himself is in good health. He wasn’t harmed; his wife also is in good health.”

Ibrahim said the aim of the attack was to assassinate the Libyan leader, which he said was not permitted under international law or morally justifiable.

“If the fight continues, we are prepared to fight and die for our freedom. We ask the world to look into this carefully because what we have now is the law of the jungle. How is this helping in the protection of civilians?” he said, referring to NATO’s mandate.

Reporters were taken to the house in an upmarket neighborhood in Tripoli. One building had been turned into a wreck of shattered concrete and twisted metal, with an unexploded missile lying in the rubble, and a huge crater that had unearthed what looked like an underground cellar or bunker.

The walls of an adjacent building were partly destroyed. In one room, a television was still turned on, and a pile of PlayStation games lay on a sofa, including Modern Warfare 2 and Fifa Soccer 10.

A pair of Homer Simpson slippers was half buried in the dust, and fruit lay in a bowl near a small green flag of the regime.

In a children’s bedroom next door, half an apple, clearly cut earlier in the evening, lay on a table between two beds.

Ibrahim did not identify the children killed or mention their ages.

In another building, there were smears of blood on a shattered mirror on the floor of a room that looked like a den, with a large flat-screen television on one wall and a bar in a corner. A children’s book was also lying on the ground.

Ibrahim said Saif al-Arab had been completing his studies in Germany.

“He was playing and talking to his father and mother and his nieces and nephews and other visitors when he was attacked and killed for no crime he committed,” Ibrahim said.

In the early hours of Saturday, Gaddafi had called for a cease-fire and negotiations with NATO but refused to surrender power. Even as he spoke, alliance warplanes struck a government complex in the capital.

Ibrahim said NATO’s response was proof that it was not interested in peace or in protecting civilians.

The eastern city of Benghazi, the de facto capital of the opposition, erupted with celebratory gunfire and explosions as news of the NATO bombing broke.

Young men took to the streets, waving their arms in the air and displaying the flag of the opposition. When one young man was asked about the killing of Gaddafi’s grandchildren, he responded: “What about our children? He’s killing our children.”

Earlier in the day, in a rambling address on state television that lasted 80 minutes, Gaddafi appeared both calm and defiant, describing NATO’s military intervention as a “massacre.”

In Brussels, a NATO official rejected the cease-fire offer, telling the Associated Press that the alliance needed “to see not words, but actions,” and that NATO would keep up the pressure until the U.N. Security Council mandate to protect Libyan civilians was fulfilled. Rebels also rejected Gaddafi’s offer of a cease-fire as “lies.”

“Why are you attacking us? Why are you killing our children? Why are you destroying our infrastructure?” he said, while denying that his forces had killed Libyan civilians.

As he spoke, NATO warplanes attacked government buildings close to the television center in Tripoli in what the Libyan government described as an attempt to kill Gaddafi. The TV images were briefly interrupted on three occasions, but Gaddafi, who spoke from an undisclosed location, did not pause. The TV center was not damaged.

The NATO attack also damaged a day-care center for children with Down syndrome.

The Libyan leader, who has ruled for more than four decades, said he would negotiate and observe a cease-fire if NATO “stopped its planes.” But even as he made the offer, he appeared to dismiss that possibility, describing his enemies as al-Qaeda operatives who do not understand what a truce means.

He also refused to step down or leave the country as the rebels — and the United States, Britain and France — demand.

“I’m not leaving my country,” Gaddafi said. “No one can force me to leave my country, and no one can tell me not to fight for my country.”

Western officials say Gaddafi needs to offer more than just a cease-fire, including withdrawing his forces from cities such as Misurata, for a political settlement to proceed.

“A cease-fire is in the advantage of Gaddafi,” a senior European diplomat said Thursday, speaking on the condition of anonymity. “It has to be something comprehensive — not only to freeze the current military line, but to withdraw forces from all occupied cities.”

On Friday evening, the Libyan government threatened to attack ships bringing humanitarian aid to Misurata, on the same day that NATO said it had intercepted Libyan government vessels trying to lay anti-ship mines in the besieged western city’s harbor.

On Saturday, government forces continued to shell Misurata. At least 16 people were killed in the attacks, doctors in Hikma Hospital said via Skype. More than 400 people have been killed in attacks, many civilians, in the two-month siege of the third-largest city in Libya. More than 1,000 are presumed dead, doctors there say.

“The injured are unknown; they’re still bringing in these poor people, sleeping in their homes,” Khaled al-Falgha said, a doctor, said. He added that he was “very happy” about Saif al-Arab’s death, saying that “NATO just needs to continue.”