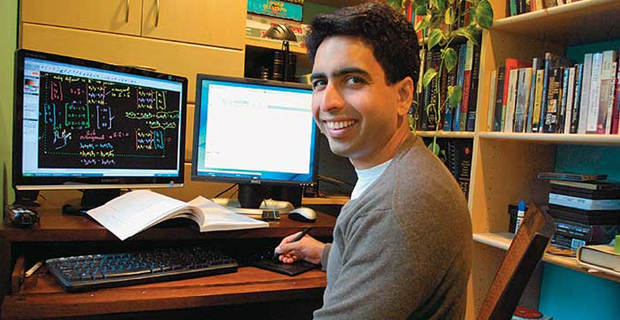 “I thought these video lessons would be a good supplement. Nadia started improving significantly and more family wanted to see them, so I put them on YouTube. Others started to randomly access them and it just went from there.” says Khan.

Five years, 2000 video lessons, and 41 million views on YouTube later, Khan is on target for his mission of “providing a world-class education to anyone, anywhere” – with one faculty member.

Khan has university degrees in mathematics, computer science, electrical engineering, and an MBA from Harvard Business School – but no formal teaching qualifications.

Last year he caught the attention of Bill Gates (who uses the videos personally to “remind myself of things”, and for his children) and Google – who have provided funding, enabling Khan to leave his job as a hedge fund analyst and concentrate on the Khan Academy.

He now has a small team developing user-paced exercises “allowing the Khan Academy to become the free classroom for the world”.

The lessons on YouTube are around 10 minutes long, and cover topics in mathematics, history and the sciences. The clips range in level, from basic adding and subtracting for young children through to university level math problems.

Khan is not seen in the videos, but his conversational voiceover steps through the problems using a virtual blackboard, coloured pens and a pointer. There are tens of thousands of comments on YouTube praising Khan for his teaching style compared with classroom teachers, crediting Khan with enabling users to pass subjects, school, even whole degrees, and requests for topics on particular subjects.

“I’m having a great time and now the focus is to build a real virtual school. At the moment the breakdown of people accessing is about 60 per cent from North America and 40 per cent from the rest of the world, but I expect that will shift once we translate into the top 10 languages. Some people in the education sector have some reservations but I think they are people who haven’t really taken a look at what I do. But some teachers are now assigning them as homework – students can pause, repeat, revise with someone talking them through it so they are not alone. And any school can access them in the world if they can access YouTube. Nadia is a freshman in college now – she still uses the videos, but when she arrived at college she noticed all her friends were using them too.” says Khan.

To start watching tutorials and to learn more about the Khan Academy, visit the website at: http://www.khanacademy.org