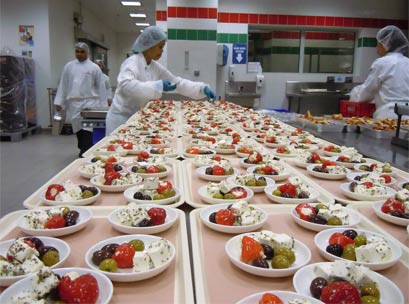 Inside a cavernous coolroom a giant sliding door opens quickly and a lone worker pushes an aircraft catering trolley into the chilly air, lining it up with a dozen others below a sign bearing a three digit flight code.

The catering supplies for Emirates flight EK037 to Birmingham is ready. In a short while its trolleys will be loaded into an elevator then rolled aboard large trucks with scissor-style lifts to elevate the trolleys to the doors of a Boeing 777.

It’s a scene repeated a mind-boggling 170 times a day. That’s how many Emirates flights depart Dubai on a rolling 24 hour basis. In cart numbers, that’s 7000 of them every day passing through this giant facility. Another flight kitchen nearby serves more meals – destined for other airlines flying to and from the United Arab Emirates’ largest airport and airline hub. 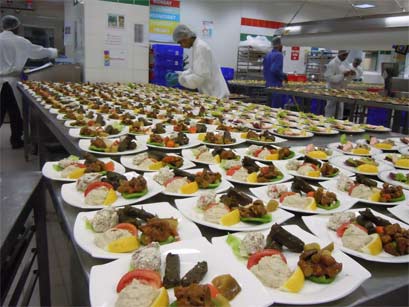 Emirates’ number one flight kitchen, preparing meals only for its own flights, comprises 56,000sqm – and already it is too small. My guide, John Earnshaw, assistant VP corporate with Emirates Flight Catering, pauses several times to point out through windows where ground works are underway for a chiller expansion or to where other catering facilities are to be expanded or replaced – all in the aid of keeping pace with the airline’s relentless growth.

To read the rest of this story: http://www.aviationrecord.com/FC/FCNews/Cooking-up-a-treat-at-35000-feet-588.aspx