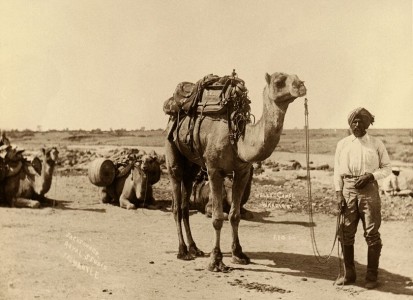 The Aboriginal people in the northern part of the continent, now known as Australia, formed bonds with Muslims from Indonesia and the Malay Peninsula as early as the 1600’s. However, the first significant Muslim community in colonial Australia was that of the Afghan cameleers. By the 1800’s, the Australian colonies were all experiencing an economic boom period. Explorers, settlers, pastoralists, and prospectors were racing to discover the mysteries of the vast interior. As they moved away from the coast, it became obvious that traditional methods of transportation were not suitable in this wide open, apparently barren, land.

Muslims in the Australian Interior

Many of the expeditions into the vast Australian interior ended in tragedy. The climate and terrain were unlike anything the explorers had ever experienced, and many people died without having achieved their exploratory goals. Horses, donkeys, and bullocks were the conventional methods of transport, but they required regular watering and large stocks of feed. They were not suited to the harsh, dry, rocky environment. As early as the 1830s, camels were being suggested as a solution to the problem, and the first lone camel to be used in Australia was attached to the Horrocks expedition of 1846.

John Ainsworth Horrocks (English pastoralist and explorer) described the camel as temperamental; biting both humans and goats, but could carry up to 350 lbs (approx. 159kg).  Neither Horrocks nor the camel survived this expedition, but not due to the camel’s unsuitability.  Four days into their journey, Horrocks paused to reload his gun, but when the camel lurched, the firearm was accidentally discharged and he shot himself in the hand and face.  Seriously wounded, Horrocks died several days later, but not before ordering the destruction of the camel.

The first Muslim cameleers arrived at Port Melbourne on 9 June 1860 to join the ill-fated Burke and Wills expedition.  The extensive introduction of camels and their handlers proved to be a turning point in the exploration and development of the Australian colonies.  Consequently, over the next 50 years, more than 2000 Afghan cameleers played a significant role in the Australian economy. However, the Muslim cameleers were rarely given credit for their accomplishments. Diaries and historical records confirm that several of the cameleers deserved recognition as explorers and vital members of scientific expeditions.

Zachariah Matthews, in his essay on Islam in Australia, states that the journals, diaries and reports of the early European explorers speak very highly of the Afghans and their strict adherence to the religion of Islam. They write of their excellent character, reliability, stamina and life-saving skills.  He asserts that many of the explorers gladly acknowledged the debt owed to their camel-handlers.

According to Bilal Cleland, in his History of Islam in Australia, Afghan Muslims participated in all the major explorations since 1860, including the last exploration of the interior, the Madigan expedition across the Simpson Desert in 1939.  Apart from these heroic achievements, the cameleers were responsible for carting supplies, mail and even water to remote settlements.  They had an important role in the development of infrastructure, such as the overland telegraph line between Adelaide and Darwin and the rail link between Port Augusta and Alice Springs, which became known as the Ghan.

Who were the Afghans?

Although all cameleers in Australia were known as Afghans, they actually came from many different countries including Afghanistan, the area that is now known as Pakistan, Kashmir, Egypt, Persia, and Turkey. The cameleers were culturally and linguistically different.  However, they were united by the religion of Islam.

According to research carried out by Museum Victoria, at first the cameleers sheltered in small camps but little by little, they added elements from their homelands and religion.  The camps became makeshift villages with mosques and religious teachers, halal butchers, vegetable gardens and date groves. These settlements sprung up on the outer edge of outback towns such as Broken Hill, Marree, Oodnadatta, Coolgardie and Bourke. The cameleers from these Ghan towns, as they were called, developed cross-cultural alliances with Aboriginal communities; relationships were formed and intermarriages were common.  Even today, there are Aboriginal people with surnames such as Mahomed, Khan and Sultan.

The first mosque in Australia was built to meet the needs of the Afghan cameleers. It was built at Marree in northern South Australia in 1861. Many of the outback settlements often referred to as Ghan towns had at least one mosque usually constructed from corrugated iron. The settlement’s social life was centred on the mosque; it provided a focal point for the cameleers as they moved from one Ghan town to the next. The first major mosque still in use was built in Adelaide in 1890. Another was built in Broken Hill (New South Wales) in 1891.

The Broken Hill City Council’s Migration Heritage Centre describes Abdul Wade as the most successful of all the Afghan cameleers.  He arrived in Australia in 1879, and by 1893 he had moved to Bourke and began importing camels and recruiting Afghan cameleers for the recently formed Bourke Camel Carrying Company. Dost Mahomet was another prominent Afghan camel driver who worked at Broken Hill. His grave lies three kilometres from Menindee, on the road to Broken Hill. He is thought to be the first Muslim to be buried on Australian soil.

The End of an Era

The advent of the motor vehicle transport in the 1920’s spelled the end of an era for the cameleers.  Some returned to their homelands, others chose to stay and settle in the colonies. Unfortunately, the Afghan cameleers left no thriving Muslim communities behind.  However, there are descendants who proudly keep their heritage alive.

As for the camels, some were sent to already established camel studs, many were shot, and others were released into the wild. Australia has the only feral camel population in the world. They are free, in excellent health and physical condition, and are now highly-prized as an export commodity.

As the Australian colonies moved closer to Federation, already present racist tensions began to erupt.  Asian, or non-white, immigration became a pressing issue.  New laws and custom duties were applied at border crossings between colonies, and anti-Afghan’ movements emerged. In 1901, after Federation, the White Australia Policy came into being.