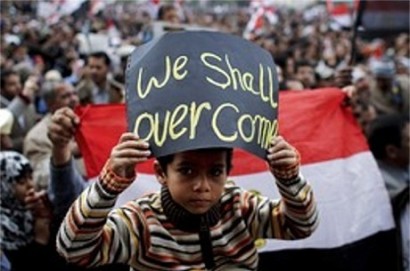 A pledge by Syria’s embattled president to lift almost 50 years of draconian emergency rule within a week was brushed aside as not enough, as activists called for more protests. Photo: AP

A pledge by Syria’s embattled president to lift almost 50 years of draconian emergency rule within a week was brushed aside as not enough on Sunday, as activists called for more protests.

President Bashar al-Assad’s long-awaited announcement came on Saturday, on the eve of Independence Day, after a month of bloody protests and a global outcry for change in the autocratic country.

But protesters took to the streets within hours of his speech, which was followed by calls for more demonstrations on Sunday posted on social networking website Facebook, a motor of the pro-reform movement.

“The day of independence is the day of liberty across Syria,” the Syrian Revolution 2011 Facebook page said of the 65th anniversary of the end of French rule.

“The juridical commission on the emergency law has prepared a series of proposals for new legislation, and these proposals will be submitted to the government, which will issue a new law within a week at the most,” he said.

On Sunday, customs seized a consignment of arms, including assault rifles and night-vision goggles, in a container at the Tanaf border crossing with Iraq, the state news agency SANA reported.

It said arms have also been intercepted at posts with Turkey and Lebanon.

In a televised address Saturday to a new cabinet tasked with launching reforms, Assad also expressed his sorrow over the deaths of an estimated 200 people in a month of protests demanding greater freedoms.

Assad addressed the broad spectrum of complaints that have sparked countrywide protests, including unemployment, corruption and a crisis in agriculture.

“Corruption is a threat to morality and to the country’s potential for development,” he said, calling for national dialogue between the state and the Syrian people.

Assad said demonstrations were “allowed by the Syrian constitution” although he added “there is no law in place to regulate them” and “police must first be trained and equipped to handle them.”

He told the new government unveiled on Thursday to act quickly and “take responsibility” and be “transparent” in their action.

But within hours of his speech some 2,000 protesters staged a sit-in in the suburb of Douma north of Damascus, demanding the release of relatives arrested on Friday during a major day of nationwide protests, activists said.

The official SANA news agency also reported around 2,000 people demonstrated in the southern protest hub of Daraa late Saturday, chanting slogans for “freedom” and the lifting of emergency law.

The notorious law in force since 1963 restricts public gatherings and movement, authorises the interrogation of any individual and the monitoring of private communications and imposes media censorship.

“It must be accompanied by reform of the judicial system which is corrupt,” said Maleh, who was released from jail on March 8, benefitting from a presidential pardon.

Maleh also called on the authorities to release political prisoners and said “interference by the security services in the lives of the citizens must stop.”

“Demonstrators must be allowed to protest,” said Maleh, 80, who had been serving a three-year sentence for “publishing false information that could weaken national morale.”

Maleh also insisted on the scrapping of Article 8 of Syria’s constitution which stipulates the ruling Baath party is the sole leader of society and the state.

The party’s newspaper, Al-Baath, meanwhile hailed Assad’s speech and his call for a national dialogue.

“The speech is a new and broad approach to the concerns of the Syrian people who are trying to improve their lives and hope for across the board reforms,” the newspaper said.

On Saturday Assad also told the new cabinet to study a draft law on political parties and said that an updated press law was on the cards.

British Foreign Secretary William Hague welcomed Assad’s call for emergency law to be lifted, in the first reaction by a Western leader.

“We call on the Syrian government to lift the state of emergency next week as proposed by President Assad and to ensure that those responsible for the deaths of civilians are held to account,” he said.