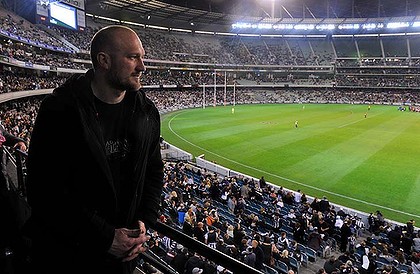 First, football saved Daniel Southern, the 15-year-old high school drop-out who dulled the heartbreak of his parents’ divorce by drinking 20 beers a sitting on weekends. Paralytic, he’d inevitably wind up under a tree in a mess of vomit somewhere.

Then, once a slightly older but considerably wiser man was drafted from Perth to the Western Bulldogs, the game focused and drove him.

As years past, having one of the most recognisable faces in the AFL, and a cult following, became suffocating. Particularly because the figure that was being recognised was not the person Southern knew he was.

During his 20s, this saw him turn into something of a recluse. When Southern wasn’t holed up in his Flemington home, he would spend his free time reading in the nearby library, or discussing religion in the favoured local hangout of Muslim taxi drivers.

Seven years after Southern’s footy career took flight, it came to a screaming halt. The shock of being severely debilitated by a knee injury when he should have been in his prime left a 25-year-old with mild depression and considerable angst to untangle. Though Southern felt he had a legitimate injury compensation claim to lodge with the AFL, he was warned off following through.

One major effort to self-help resulted in Southern moving to Cairo. Shutting off from virtually everything he had known, he led tour groups through the Middle East and converted to Islam.

Last week, the now 36-year-old returned to Australia with a wife, Reham, a 10-week-old son, Zakaria, and an Arabic name — Mustafa.

While even the abridged version of his past has no shortage of drama, nothing compares to the scenes he witnessed in recent weeks in the city he now calls home. The twist in this tale is that while Cairo has been lawless, burned and looted, Southern is in one piece and back in Melbourne telling the story.

“It’s a strange sort of journey, the way it has all worked out,” he said during a two-hour sitting with The Sunday Age and re-familiarisation with his old Racecourse Road stomping ground.

Once a self-described footy junkie, Southern saw his first game in seven years at the MCG on Friday night. After hearing how quick the game had become, Southern was full of anticipation. But Collingwood’s demolition job on Richmond left him somewhat cold. He couldn’t understand why Dane Swan wasn’t met with a hard tag, struggled to find enforcer-type players on either side, and lamented the lack of gripping one-on-one contests.

“I guess I had some sort of higher expectation, not having seen a match for such a long time,” Southern said. “What I noticed was the lack of physical presence on the ground. I don’t know if players are scared to put on a shepherd or a block, I’m not too sure what the laws are about that these days, but that was one thing that really stood out.

“Tarrant was on Riewoldt, but aside from that there didn’t look like there were any real one-on-one match-ups. Something else I felt had changed was that there was no one that was like an intimidator or an enforcer. No one that stood out to me that had a real physical presence out on the ground, like ‘don’t run into my area otherwise you’re going to get crunched’, which would have other players looking over their shoulders. If Leigh Brown ‘the anvil’ is the most intimidating player on the field, for me that’s not too intimidating.”

Still, the roar of a football-adoring crowd — unforgettable, no matter how long the intermission – still made Southern’s spine tingle. He heard a cacophony of sounds that was similarly memorable, although utterly terrifying, before leaving Cairo. On February 2, as his wife moaned through labour in a hospital overlooking the Nile, gunfire resonated through a city in the midst of a revolution.

Criminals were on the loose because prison gates had been opened. Military tanks and roadside checkpoints sprung up on streets everywhere. Downtown Cairo was unrecognisable. In brief, it was anarchy.

In these circumstances Reham had to be induced. Leaving a home they had barricaded with knives, Southern drove his wife to hospital in the strict civilian curfew hours fearing for their lives, not to mention the child in utero.

“It was probably the most violent day of the revolution,” Southern said of the day Zakaria Daniel Mark came into the world.

“Cairo went from one of the safest places on the planet — a city of 20 million where you could walk down a street any time, anywhere and never feel threatened — to one of the scariest, most violent and lawless, overnight.

“I actually had a cry that night in hospital because while it was the greatest gift to see what we had created it was absolute chaos out there.”

It was not the precarious political state of the region that brought Southern back to Melbourne, but an invitation from the AFL Players Association to speak at a career-transition breakfast last Wednesday. While that might seem contradictory, given how firmly Southern closed the door on footy, he obliged because of how the organisation helped lead him out the other side.

While he was still playing, the AFLPA arranged a work placement for Southern at Melbourne Zoo. He enjoyed looking after the carnivores and ungulates but also realised he “didn’t want to pick up lions’ poo for the rest of my life”.

Southern attributes his fascination with Africa, and its wildlife, to his Tanzanian-born, Ugandan-bred mother who set her young son’s imagination alight by telling stories of where she grew up.

He first visited Egypt in 1994, as a 19-year-old recently drafted Bulldog. Southern was thoroughly unprepared, spent most of his money before he arrived, and lost his passport.

Unperturbed, he returned in 1999 and loved it. By that stage Southern was on the verge of notching 100 senior games and had become an AFL defender of repute, regularly asked to mind such champions as Gary Ablett snr. He completed a diploma in Eco-Tourism and, after his traumatic retirement, relocated to Egypt in 2005.

Southern met Reham in Cairo in 2008. While he initially had a crush on her friend (who he later discovered was engaged), it wasn’t long before he fell in love with someone he now describes as “a great woman. Super strong with hot Arab blood . . . she’s gold.”

Despite the fledgling romance that was cultivated conservatively, according to Muslim custom, Southern initially felt he wasn’t ready for the complexities of an inter-cultural union. This was despite the fact he’d already converted to Islam, which he began seriously exploring while in Melbourne after feeling Muslims had been unfairly typecast after the September 11 terrorist attacks.

After a heart-wrenching three-month separation, however, he and Reham were married in June 2009, with Stephen Powell the only former AFL player present.

Southern and Reham have a small apartment in Cairo where the pyramids can be seen from every room.

“My parents got divorced when I was nine and I basically went off the rails,” he said last week. “I had an older brother and an older sister, and I guess people start to experiment in Australia around the age of 14 or 15. I was just the little brother that tagged along for the ride. They were starting to experiment and I’m drinking at nine or 10. By the time I got to 15 I wasn’t an alcoholic but I was definitely a binge drinker. Every weekend I’d drink, I don’t know, like 20 beers in a night. As a 15-year-old. And I’d end up paralytic underneath a tree somewhere vomiting my guts up.”

Football navigated Southern away from the dark path he was walking at that time. He had shown enough talent, even at 15, for the West Coast Eagles to be aware of him, and when he suffered a bad knee injury the club helped him rehabilitate over an 18-month period in many ways. The professionalism the teenager witnessed at the high-flying AFL club made a profound impression.

Southern estimates he has drunk alcohol on six occasions since then. The last time was in Cairo, on his 30th birthday, and only at the insistence of a great friend and former housemate.

In recent times that same mate, a Collingwood nut, has kept Southern updated with the Magpies’ progress. Most other developments in footy – the name of Carlton’s current coach and the substitution rules for instance – have eluded him.

Back in his old Flemington terrace last week, Southern opened a cardboard box.

“Danny Southern was in that box,” he said afterwards.

Among the newspaper clippings and footy jumpers he was particularly amused to rediscover a baby’s bib decorated with the words – “When I grow up I wanna be like Danny Southern.” For Southern, that simple sentence said it all.

“Before football, I’d never been called Danny in my life. People may as well have been calling me Tom! I’m Daniel. Call me Tom, or call me Muhammad, or call me Mustafa, because I hate Danny. But that’s how I was branded and stamped.”

‘Danny’ the footballer was a yobbo, a boozer, a man’s man. Daniel was studying, contemplating the virtues of Islam, and sober. ‘Danny’ Southern existed only in the minds of others, and the picture certainly would have been challenged if he’d announced he was Muslim.

Southern, Reham and Zakaria have not fixed a date to return to Egypt, though they expect to remain in Australia until the end of the month.

“My country might be burnt down by the time I get back there, so right now I’m in that rare space where tomorrow is unknown.