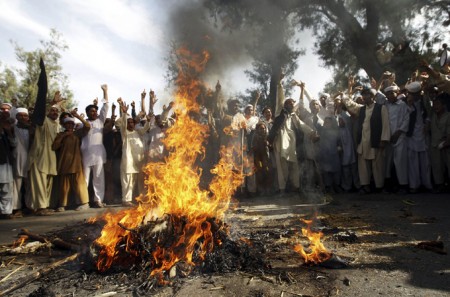 The recent violent protests in Afghanistan – a reaction to the burning of the Quran by a small church in the United States last month – recalled an inescapable reality.

Extremists on all sides – whether in free, democratic America, or in corrupt, occupied Afghanistan – create havoc and chaos, demonstrating the danger brought about by a deadly cocktail of ignorance and idiocy. Ultimately, they cause the deaths of innocent people.

Some cite the difference between the two acts: one saw the burning of a book, while the other claimed human lives.

This is of course true, but what exactly did the mastermind of this foolish and hate-filled act expect, other than a reaction somewhere on the Muslim side?

His bark worse than his bite

Pastor Terry Jones, of the formerly obscure Dove World Outreach Church in Florida – a parish of no more than a few dozen weekly followers – has been enjoying fame and possibly even fortune since calling for a ‘Burn the Quran’ day last September.

He was dissuaded from carrying out his act following a worldwide outcry from Christians and denunciation from American political, religious and community leaders.

But it seems that Jones had an itch that simply had to be scratched, and in March, he and some of his comrades burnt a copy of the Quran.

Strangely though, whilst last year’s threat resulted in outrage throughout the Muslim world and mass protests in most Arab countries, the act itself – once carried out – brought almost no reaction from the streets of those same countries, apart from the ones in Afghanistan.

Hundreds of thousands hit the streets of Cairo, Damascus, Amman, Sanaa and many other Arab cities last summer denouncing Jones, burning effigies and flags and calling for a global campaign to ‘protect the Quran’.

I recall receiving hundreds of emails and texts messages expressing outrage, and calling for immediate action in protest against this heinous act.

Yet now that Jones has actually carried out his threat, not one single demonstration was held, no mass protest was called for, no texts or email messages criss-crossed the ether, and no days of anger were organised.

One would have expected such protests to come easily to the masses already camping on the streets of Cairo, Tunis, Damascus, Sanaa and Benghazi. Logistically, the scene was set; all would have been ready for such action, but nothing of the sort came to light.

There is no suggestion that those masses revere the Quran any less, or that they see the act carried out by Jones as any less repugnant. So why the apparent inaction? Because the ‘Arab spring’ has elevated minds as well as aspirations, a trend absent still in the contexts of Afghanistan, Pakistan and other countries where corruption is still riding a wave.

One cannot say for sure whether it was the upheavals in the region that had the Arab nations looking elsewhere to exert their collective energies, but it is without a shadow of a doubt that the absence of ‘anti-Terry Jones’ protests was not due to a lack of energy or of ability.

For several years, those studying the Arab world through the mobility and narrative of the masses have emphasised that the number one priority for the Arab people (and Muslims by extension) is the pursuit of freedom and the recapture of their long-lost dignity.

Manifestations of religious, ideological, and cultural extremist behaviour were essentially a reaction to stagnant political climates imposed by despotic regimes, lack of human rights and absence of any hope in a better future.

Thus those people – who considered it their ultimate objective a few months ago to demonstrate anger and outrage for the threat to burn the Quran – today were in no doubt whatsoever that today their priority was to remove those regimes that have ruled them so inhumanely for so long.

Therein lies an important message for those Westerners who make a living from counter-terrorism and eradicating extremism: Supporting despotic regimes and dictators for short-term political and economic gains begets extremism that takes shape in a religious, social, political, ideological or cultural format.

The claim that removing or compromising regimes, such as that of Mubarak, Ben Ali, Saleh, Gaddafi or Assad will inevitably bring an extremist element to government is baseless, as demonstrated by events unfolding before us.

In all of the examples of the nations that revolted against their tyrants, rather than witnessing violence, the world saw protesters insisting on peaceful means despite them being confronted hired thugs and armed security forces.

Those same nations exemplified the meaning of national unity in practise rather than words. Muslims and Christians protected each other, came to each other’s aid and guarded each others’ holy places of worship against the threat of arson and vandalism by elements who had an interest in anarchy and division breaking out.

As soon as the opportunity emerged, those who had lived their lives merely dreaming of living under a democracy someday turned out to be brilliant democrats in practise.

What remains to be seen is whether the West will adapt to the new terrain and change its ways too.

The mood for change

Travelling the region extensively and conversing with people from all walks of life, one cannot miss the the new air of confidence about the Arab citizen.

Whether in Egypt where the revolution is in full swing and some significant fruits have been borne, or in other countries where no mass protests have been reported, there is no doubt that the mood is one for change and transformation.

Conversations in the Arab street are much more bold, brazen and uncaring about who might be eavesdropping. It’s simply a matter of time, but change is certainly now a matter of ‘when’ rather than ‘if’.

Once free, the Arab and Muslim nations will not resort to violence, extremism and isolationist practises, as some would like the world to think.

Once free, those nations will see the act of Terry Jones as the petty and foolish gesture that it undoubtedly was, and will realise that it brings more damage upon him and his reputation than upon the object of his deranged hatred.