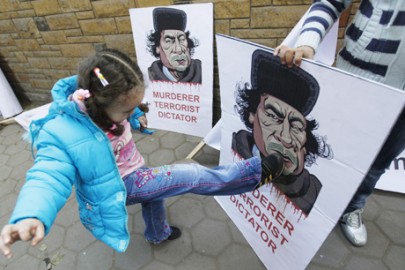 Ten of thousands of Iraqis gathered in Baghdad’s Firdous Square on Thursday, April 9, 2009, the sixth anniversary of the fall of Saddam Hussein’s government to U.S. forces.

It was just about eight years ago. Baghdad had fallen and really it wasn’t an unhappy place. Sure, there were fire fights, especially at night. But restaurants were re-opening, and the markets were getting more crowded each day. Looking at a city that seemed OK, the American decision to decrease the intensity of security made sense to everyone. We all breathed easier. For a day or so.

But soon, moving around the city with Iraqis, problems became more and more obvious. In those days I was with Sunni and Shiite, and they really couldn’t have cared less about that difference. They were united in joy at the fall of their bad’un, Saddam. But as the city moved from conquered to occupied, they wanted their police back.

It didn’t take long before the allure of outsiders pointing guns at them began to wear thin.

Their cops wouldn’t be coming back. From the rules of engagement meetings I sat through, it was obvious why. The rule was: “If it’s wearing a uniform, one in the heart, one in the head,” meaning bullets. Cops were included in that. They were, after all, part of the national security force. Being a cop meant being an enemy of the United States.

A month later it became official when Paul Bremer fired the military, saying it couldn’t work, couldn’t regain the support of the people. I’ve had heated arguments since about whether he was right or wrong. I think he was wrong, but that’s me. But the arguments do tend to agree on this point: That’s really when it all fell apart and went wrong.

The Iraqi insurgency, at least at first, wasn’t a conventional confrontation as much as it was a crime spree. The cops were off the streets. First unguarded military ammo dumps were emptied. After that everything else was an easy target. Banks, bankers, shops, shopkeepers. Kidnapping became so common families armed themselves for morning walks to school, kids in the middle, gun barrels pointed ahead and behind. While school was in session, which wasn’t often, parents used school walls to set up defensive positions.

No one thought this would happen. Most Iraqis hated that it was happening. But in any society there are criminals. Take cops out of the equation (and even a dominating occupying army isn’t in a position to play police, it’s simply not what they do) and that bad element runs amok. Every time I returned to Baghdad in the coming years, the Iraqis I knew and trusted talked about how crime made life more impossible each day.

Which brings us to Libya. The effort now under way may be noble but it is terrifyingly complex and fragile. Right now, fire is focused on the Libyan military, those loyal to Col. Moammar Gadhafi, ol’ Crazypants. He’s a bad’un.

But destroy that military, bring freedom and … what? Who’s there to mind the store? Or mind if the store is looted, the kids are kidnapped; the streets are ‘unwalkable’.

Is the rebel force moving back and forth across the desert capable of immediately establishing order in Libya? We’re not seeing the signs right now. It’s troubling to have no idea if they understand how to rule.

Because if they don’t, right away, there won’t be a police force in Libya and, well, we’ve seen this scene before.

That’s the problem. Wholesale slaughter is a horrible thing. But thousands who die during a couple of horrid days are no deader than thousands who will die over years. I’ve seen them drill holes in skulls in a place that into chaos. Once society breaks, it takes years to fix.

So, because I agree with President Barack Obama that this country can’t afford another protracted war, I ask: If — even hoping or knowing we’re doing good, doing the right thing — we create chaos, leave behind a power vacuum that is filled by people we don’t like, and taken advantage of by criminals, can we simply walk away?