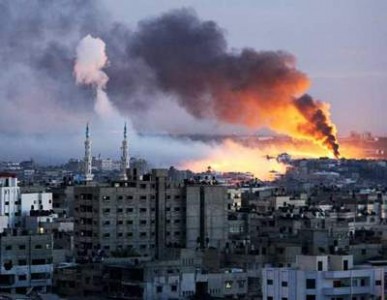 Firing mortar shells on southern Gaza strip, Israel killed three Hamas members early Saturday, April 9, taking to the death toll to at least 18 people in the past few days in the most deadly strikes since 2008-9 war on the besieged strip.

“We will not permit sporadic shootings or the disruption of life.”

The new deaths followed an early Saturday morning strike by Israeli forces on southern Gaza strip which killed three members of Hamas group and injured dozens, according to Israeli military and Palestinian medics.

The attack targeted a vehicle in the south of Gaza killing a senior Hamas commander and two of his aides.

The Israeli attacks also targeted a smuggling tunnel under the Gaza-Egypt border. At least 57 Palestinians were wounded, 12 of them seriously, medics said. The strikes followed rocket attacks on southern Israel desert that caused no casualties.

On Friday, the system intercepted three Grad rockets fired at the city of Ashkelon.

Israel “will continue to operate, under full consideration, to implement a principle of defending our citizens,” Saar added.

The death toll of 18 in three days made it the deadliest period in Gaza since the end of Israel’s last offensive in Gaza two years ago.

The offensive wrecked havoc on the Gaza infrastructure, destroying thousands of building across the impoverished territory.

Responding to the escalated attacks, Hamas warned of broadening its targets into Israel if Israel failed to halt its assaults on the Gaza Strip.

“If the Israeli escalation continues, amid international silence and complicity, the reactions by resistance factions will broaden,” Hamas spokesman Sami Abu Zuhri told Reuters on Saturday.

The new attacks came despite a declaration by Hamas that it has brokered a ceasefire with other Islamic groups in Gaza strip.

Abu Zuhri blamed Israel for an escalation in violence and accused Israel of breaking the ceasefire with its new raids.

“Our holy warriors are ready to react to the Zionist aggression and respond to any foolish acts committed by the occupation with everything they have,” said a statement from Hamas’s armed wing, the Ezzedine al-Qassam Brigades.

The recent attacks were condemned by the Palestinian authority in a letter to the United Nations Security Council submitted by Ambassador Riyad Mansour.

The letter charged Israel with using “indiscriminate an excessive force” and asked for the world body to intervene to “prevent the slaughter of more innocent civilians.”

The attacks were also denounced by the European Union chief Catherine Ashton who called on Friday for a complete “cessation of violence” between Gaza and Israel.

The EU chief said that she also deplored “the loss of civilian life in Gaza and call on Israel to show restraint.”