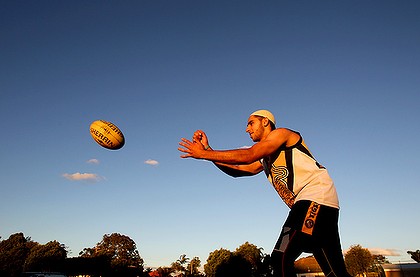 There was a time at high school that Hisham Krayem, 20, was ashamed to admit he prayed.

An Australian-born Muslim from Picnic Point, he would excuse himself from his friends at lunchtime. He told them he had to see a teacher, or had something to do. Then he went to a classroom to pray.

”At school, everyone knew I was Muslim, but I wasn’t open about it,” Mr Krayem said. ”When I was fasting [for Ramadan], people would offer me food and I would just say I wasn’t hungry. I didn’t have the confidence to say what I was doing or why.” Things weren’t easy for him after the September 11 terrorist attacks, a race-based gang rape in south-west Sydney and the Bali bombings all made headlines.

”Someone said to me: ‘You guys rape everyone so you deserve whatever you get’,” Mr Krayem said. ”So I hid the practices of my religion, thinking people would look down on me.”

Like many teenagers, Hisham began to question who he was.

”I used to be torn, I thought I would have to pick between being Muslim or Australian,” he said. ”But I learnt Islamic and Australian values complement each other. I’m Australian by culture. I’m Muslim by faith. And I’m Lebanese by heritage. When I understood I was all of those things, I was able to reconcile who I was.”

Forty per cent of Muslims living in Australia are under 20, according to the non-profit Dulwich Centre Foundation, which helps groups and communities facing mental health difficulties after hardship.

Many Muslim migrants have endured war and violence in their birth countries and are now struggling with poverty, English literacy, and marginalisation in Australia. The Dulwich Centre has taken the stories of how young Muslim Australians such as Mr Krayem have coped and compiled their advice into a booklet, which will be used to help Australian teenagers.

Zayaan Jappie, 28, was born in Cape Town, the daughter of ethnic Malays, both Muslim. Her early years were marred by violence. ”South Africa at the time was out of control,” she said. ”People were getting murdered left, right and centre.” Her family moved to Australia when Zayaan was seven. ”But I remember a lot about South Africa,” she said. ”I feel a very strong connection with it living under the circumstances we did.”

Her experiences of school in Australia ”weren’t the best”.

She was called racist names and struggled to find her place. ”But I came here with a lot of curiosity and an open mind and heart.” Ms Jappie has spent the past year in Los Angeles working with a film director on short films. She said the most important lesson she had learnt was to follow her passion rather than external expectations. ”I think Muslims in the past chose to do things that would guarantee them a good profession,” she said. ”Their parents had no money, so they believed they had to get secure jobs, find a decent house and not end up the same way. But now, we have other plans. We are less afraid to branch out. With passion and the right attitude you can try anything, you can follow your dreams.”

Tasnim Saeid, 21, said humour was her response to challenges in life. She was born in Iran and came to Australia with her family when she was nine. From Bass Hill, she went to Hampden Park Public School in Lakemba, then spent most of her high school years at Birrong Girls High.

”I was lucky because the teachers endorsed a multicultural spirit,” she said. But towards the end of high school, she realised not everyone was tolerant. ”I started listening to Alan Jones, and reading and watching the news, and that’s when I got exposed to the ignorance out there,” she said.

Now at university, she responds to ignorance with humour. ”Now if someone thinks I’m a ‘crazy towelhead’, I try to be funny,” she said. ”So when a girl asked me in class recently, ‘How do you shower in your scarf?’, I replied; ‘My problem is getting the conditioner right through to the hair roots.’ And when someone was talking about Osama bin Laden, I said: ‘Well, we all have crazy uncles in the family, don’t we?’ ” But Ms Saeid does not complain. She is involved with her community, and hopes to dispel the myths surrounding her religion.

She volunteers with several community groups and is co-host of a youth radio show on 87.6FM, an ethnic community radio station. ”When Muslims complain about the perceptions people have of them, I say, well what are you doing to change them?” she said. ”Instead of seeing it as a burden, the perception that Muslims do not blend in, I can actively show that is not the case. Then, perceptions can change.”