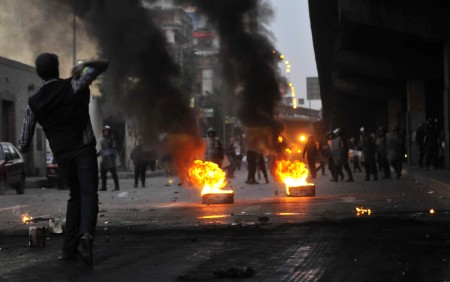 While Western governments have long worried about Egypt’s Muslim Brotherhood, Egyptians are more concerned about the rise of Salafist groups, which have been blamed for a series of violent incidents in rural areas.

The Salafists have denied responsibility.

The Salafists have a strict interpretation of the Koran and believe in creating an Islamic state governed by Sharia law as it was practised by the Prophet Muhammad and enforced by his companions in the 7th Century.

They argue that the Muslim Brotherhood has become too focused on politics at the expense of religion.

“An Islamic government is a government that is based on Sharia law”, said Abdel Moneem al-Shahat, a rising star of the Salafist satellite TV circuit. “Sharia can’t be changed because it comes from the days of Prophet Mohammed.”

Egypt’s Salafist groups, which started attracting significant support in the 1980s have in the past kept a low profile. But since the revolution they have been much more vocal.

Their newly found confidence was on display recently at the vast Amr Bin al-As mosque in Cairo.

At a convention after Friday prayers thousands of men sat cross-legged on the floor as senior Salafist clerics spread the word about their desire for an Islamic government.

With no opinion polls in Egypt it is impossible to gauge the strength of the Salafists movement. Some say their percentage support is in single figures, but others are convinced they now constitute a major political force in Egyptian society.

“The Salafist movement is very big in Egypt,” said the editor of Cairo’s Democracy Review, Hala Mustafa, who recently devoted an issue of her journal to the Salafists. “The number of its members exceeds the members of the Muslim Brotherhood”.

In fact the Salafists’ exclusively religious outlook is now changing. Even though they came late to the revolution many Salafist groups, which have traditionally steered clear of politics, are now saying they want to participate in the political process.

Salafist satellite TV channels give an indication of their growing influence.

Founded in 2006 by a Saudi businessman, Al Khalajia TV, used to broadcast pop songs and dancing videos. Then the owner wondered whether religious music and Salafi sermons would turn a quicker profit.

Nowadays it shows bright-eyed boys learning the Koran and often ecstatic bearded clerics demanding Sharia law. It is one of about a dozen religious TV channels broadcasting in Egypt.

Some Egyptians fear the Salafists will try to impose their world-view through force.

In recent days the Salafists have been accused in rural parts of Egypt of cutting off the ear of an alleged pimp, attacking an alcohol shop and smashing up some Sufi shrines on the grounds that they represent an overly superstitious approach to religion and are un-Islamic.

“Suddenly they have become more violent,” said Hala Mustafa. “They try to turn Egypt to an Islamic state because they think there is a vacuum.”

Hala Mustafa believes that the Salafists are mistaken to think they can take the revolution from the young, and in many cases more religiously moderate, people who fought for it.

But the Salafists and the secularists in Egypt have such divergent visions of the future that it is hardly surprising they view each other with contempt, mistrust and fear.

Mona Makram Obeid, who once taught political science at the American University in Cairo, believes the mainstream has been galvanised by the Salafists’ sudden emergence.

“The Salafists have been brought out from their caves,” she said.

“Everyone is frightened. There is a lot of fear in society and a lot of concern.”