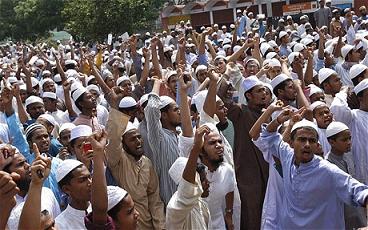 Thousands of angry Bangladeshi youth continued for the third day angry strike over government plans to give women the same inheritance rights as men, amid reports of clashes with police which resulted in killing one and injuring dozens.

“We have sufficient deployment across the capital.”

Bangladeshi parties, known as the Islamic Law Implementation Committee, called for the strike to protest the government’s move to pass laws giving equal property and inheritance rights for women in the Muslim-majority country.

Issued under the name of National Women Development Policy 2011, Islamic groups joined main opposition Bangladesh Nationalist Party (BNP) and its ally, Islami Oikya Jote (IOJ), saying the law was against the tenets of the holy Quran.

Under the new rules, both men and women would inherit the same amount, an aim long sought by women’s group.

On Monday, some 1,000 protesters blocked the main Dhaka-Chittagong highway.

While new agencies said that about one was killed and 30 other injured, police said that nine police officers were injured across the country while trying to break up crowds, while 118 people were arrested.

“Up to 1,500 protesters suddenly attacked us with stones and bamboo sticks,” inspector Shahidul Haq of central Nagarkanda town said.

“They torched one of our lorries.”

Similar protests erupted earlier in 2008 over a draft law that would give women the same inheritance rights as men.

The then government has denied that the plans had been passed into law, confirming that no legislation would be passed that goes against the Qur’an and the traditions of Prophet Muhammad (peace and blessing be upon him).

Islam says “woman can never be equal to man,” Amini said in reference to inheritance rights.

The policy has been formulated “in the light of holy Quran and Hadith (Sunnah),” Hasina said, the United News of Bangladesh (UNB) reported.

“Who is more powerful, Almighty Allah or Amini?”

Islam, as a divine religion, sets down rules that strike a balance between men’s responsibilities and women’s rights.

Islam gives the girl half of her brother’s share in inheritance because Islamic Law doesn’t oblige her to spend any money on anybody other than herself.

On the other hand, Muslim man, who is usually the bread-winner of the family, is obliged to spend on his wife, his children, his brothers, his sisters, and his mother and father.

Bangladesh is the world’s third-largest Muslim majority nation with a population of some 148 million.

The country has a secular legal system but in matters related to inheritance and marriage Muslims follow Sharia`h.